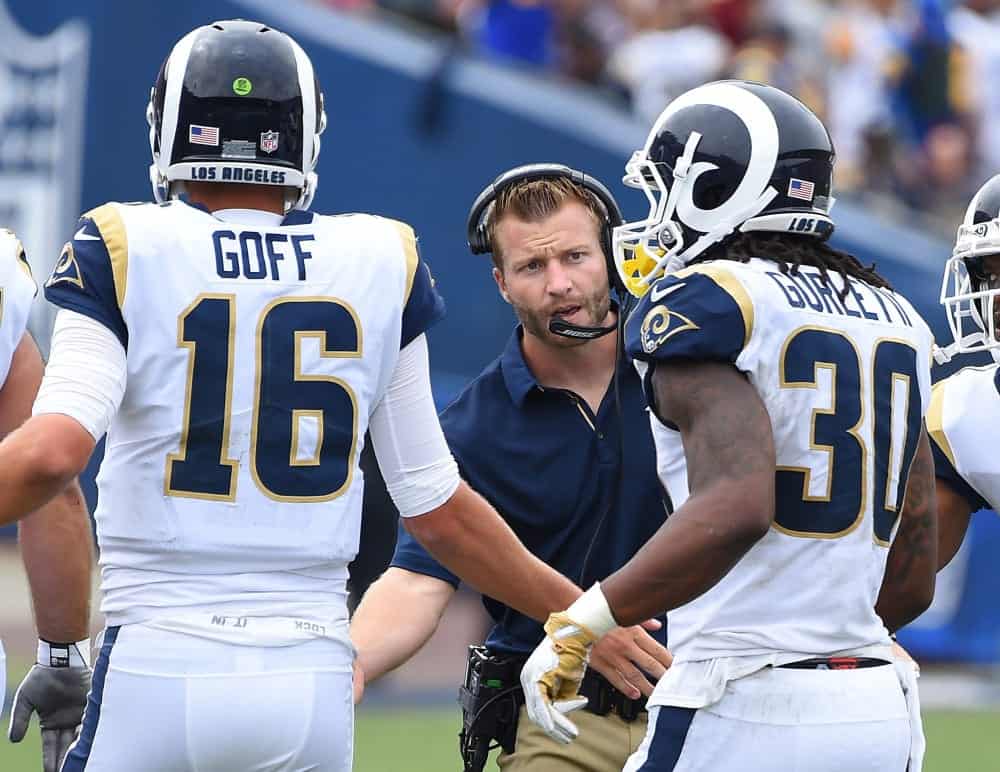 Photo credit: si.com
What's in this article? Click to show
The Los Angeles Rams have little room against the 2019 salary cap. They will look to the 2019 NFL Draft to fill the remaining team needs.
The departure of Rodger Saffold, John Sullivan, and others in free agency
Holes to fill in the upcoming 2019 NFL Draft

The Los Angeles Rams have little room against the 2019 salary cap. They will look to the 2019 NFL Draft to fill the remaining team needs.

The Los Angeles Rams and prodigy head coach Sean McVay are in position for another NFC title run in 2019. However, key pieces from their 2018 Super Bowl run will be missing due to salary cap constraints. The Rams were projected to have $30 million in cap space at the start of free agency. That amount did not last long as they quickly signed a one-year extension with linebacker Dante Fowler totaling $12 million. Also, the Rams reached a two-year agreement with versatile safety Eric Weddle for $10.5 million.

McVay’s talent evaluation skills will be on full display in 2019 as two draft picks from 2018 move into starting roles. 2017 third-round pick John Johnson III developed into an outstanding strong safety, as he ranked seventh in the league at the position according to Pro Football Focus. 2017 fourth-round draft choice Samson Ebukam developed into a league average outside linebacker/edge defender. The Rams will need their young players to continue to develop as they lost a few key pieces in free agency.

The departure of Rodger Saffold, John Sullivan, and others in free agency

Saffold anchored left guard for the Rams the past nine seasons. His return to Los Angeles was unlikely because of salary cap restraints. Saffold promptly signed a four-year deal with the Tennessee Titans totaling $44 million. The Rams declined the option on center John Sullivan and as a result, 2018 fourth-round pick Brian Allen will take over at center. Joseph Noteboom, a third-round pick in 2018, will take over at LG for the departed Saffold.

The void created by the departure of free safety LaMarcus Joyner, franchised in 2018, will be filled by the 34-year-old Weddle. Fresh off three straight Pro Bowl selections with the Baltimore Ravens, Weddle re-joins defensive coordinator Wade Phillips. Phillips coached Weddle from 2007 through 2015 while he was with the Chargers.

The Rams also signed Blake Bortles to back up quarterback Jared Goff. The Jacksonville Jaguars castoff signed for one year, and $1 million according to NFL Network‘s Ian Rapoport. The financials of that deal was critical considering that the Rams need around $5.5 million to sign their 2019 draft picks. One hopes Bortles never sees the field in a Rams uniform, but with Sean Mannion heading to free agency, the Rams needed someone with experience. Perhaps wonderboy McVay can rejuvenate the historically erratic Bortles and restore his confidence.

Holes to fill in the upcoming 2019 NFL Draft

The Rams still have many holes to fill in the upcoming NFL Draft. Defensive tackle Ndamukong Suh remains unsigned and will likely not return to the Rams. Inside linebacker Mark Barron signed a two-year deal with Pittsburgh worth $12 million. Cornerback Aqib Talib turns 33 years old and battled injuries last season.

CB Marcus Peters, acquired via trade with Kansas City last year, is suddenly an average corner. Left tackle Andrew Whitworth, coaxed out of retirement to play in 2019, will turn 38 in December. Running back CJ Anderson remains unsigned, and McVay will be looking to reduce running back Todd Gurley’s workload.

As you can see, there’s a lot to fix. Therefore, the Rams will be looking for Suh’s replacement, an upgrade at outside linebacker, youth at cornerback, and a new starting ILB. They will be without a second-round pick due to the Peters trade last season. Los Angeles picked up a third-round compensatory pick for 2019 (99th overall) resulting from Trumaine Johnson signing with the New York Jets last season.

NFL Free Agency is slowing toward a halt, and the rest of the offseason will likely have only small name signings. The NFL Draft will be now vital in filling the holes created since season’s end. With that in mind, Los Angeles must keep hitting on picks if they want to have long-term success and make another Super Bowl run.