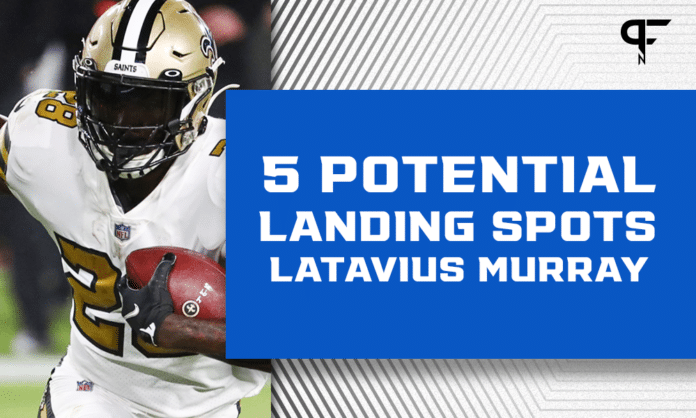 Upon first glance, there aren't many Latavius Murray landing spots. Nevertheless, his skill set makes him a valuable asset to a few teams.

Latavius Murray must know he’ll land on his feet somewhere because he’s looking for new landing spots after being cut by the New Orleans Saints. The Saints save over $3 million in cap space in 2021 after cutting Murray, who always felt like a salary cap victim in the making. Where might Murray end up?

At first glance, there doesn’t feel like many landing spots for Murray. However, with a little digging, we find there could be a lot of use for someone of his skill set. Although Murray has always been a bit of a letdown as a runner, he had the most efficient season of his career in 2020, averaging 4.5 yards per carry behind the Saints vaunted offensive line. His ability as a blocker is what gives him so much value.

This seems like the obvious one. J.K. Dobbins goes down for the entire 2021 NFL season, and the Ravens are left with Gus Edwards and a bunch of unknowns at the position. However, Lamar Jackson mentioned Ty’Son Williams by name after the Dobbins’ injury, so there might already be a favorite for RB2 in Baltimore.

Murray may not be as fast as he once was, but that “once” was a 4.38 in the 40-yard dash. He’s also widely regarded as one of the better pass-blocking backs in the league, which the entire league enjoys. Even with the Le’Veon Bell joining the practice squad, the Ravens should still consider signing Murray, given their recent résumés.

Myles Gaskin is the starter in Miami, and for good reason. He’s shown to be a good runner with great upside in the receiving game as well. Behind him, though, Malcolm Brown is a fine back, as most are in the league, but he doesn’t necessarily move the needle.

This might make more sense for the Dolphins than the Ravens, given their discrepancy in offensive line talent. The Dolphins need better pass protection, and Murray could help when they want to keep more than five in to block.

The Rams acquired Sony Michel from the New England Patriots, but they might not be done yet. Darrell Henderson is a relative unknown, although his 4.5 ypc in 2020 is a good sign. It’s difficult to trust Michel’s health due to his knee troubles.

The Rams are another team that could use Murray behind a good but aging offensive line. When asked to stay in and block, he could add to their pass protection. He can also use his athleticism in the space provided by an impressive schematic rushing attack. Heck, the Rams made C.J. Anderson look like a stud for a minute.

The Chargers could be another one of the landing spots for Murray. Behind Austin Ekeler, they really don’t have a whole lot to love. Even if Ekeler remains healthy, it would be nice to have a veteran presence behind a young quarterback in the backfield.

Murray also hasn’t been a stranger to catching the football. Although he’s not what we’d consider a pass-catching back, he does more than enough of it to warrant consideration as a third-down back, especially when considering his pass-protecting prowess.

There’s nothing behind Derrick Henry with Darrynton Evans on IR. With the lack of tight end talent on the roster, the Titans could use more 20 or 21 personnel with Murray staying in as a blocker or leaking receiver.

These teams are possible landing spots but might not be as competitive a landscape as the top options.

Behind Najee Harris, the Steelers really don’t have a whole lot. Benny Snell is just a guy, and Kalen Ballage isn’t exactly a big option on offense to show off to 31 other teams.

Urban Meyer seems like the type that would enjoy stockpiling backs. Murray’s blocking ability could help with Trevor Lawrence’s development. Keeping him off the turf should be Jacksonville’s top priority.

The Giants could use depth behind Saquon Barkley. Nothing on the roster stops them from keeping Barkley on the field as often as possible. Coming off an ACL tear and just now being ready, this could be one of the best landing spots for Murray if he wants to maximize his reps.