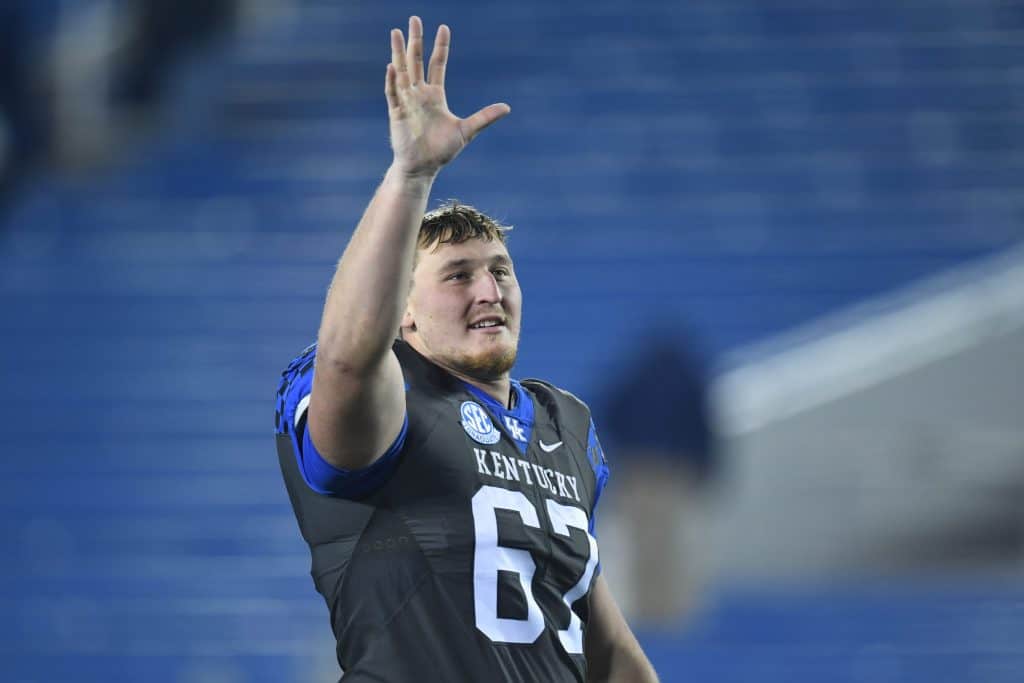 The sheer depth of the offensive tackle class this offseason is one of the draft’s biggest storylines. Even so, however, some tackles are overlooked beneath the volume of quality players. One of those overlooked NFL Draft prospects is Kentucky offensive tackle Landon Young. What kind of skill set does Young provide, and does he have starting upside at the NFL level?

Positives: Large, strong blocker who is best in a small area. Sets with a wide base, stays square, and displays terrific hand technique.

Patient in pass protection and anchors at the point. Turns defenders from the action and seals them from plays. Flashes footwork off the edge.

Analysis: Young was a solid lineman at Kentucky and comes with size as well as growth potential. He’ll be best as a strong-side blocker in the NFL at either tackle or guard and is a developmental prospect who may have to spend a season on the practice squad.

Landon Young was a highly-rated football prospect dating back to his days in high school. In fact, as a recruit, the hulking tackle earned interest from several prestigious SEC teams. Young stood over 6-foot-6 and almost 300 pounds as a senior in high school, and that frame earned him plenty of fans on the recruiting circuit.

Young was officially rated as a four-star recruit on ESPN’s board and was ranked inside ESPN’s Top 300, at No. 134 overall. The future Kentucky offensive tackle fielded offers from SEC rivals Alabama, Auburn, and South Carolina, as well as Ohio State and Miami.

Nevertheless, being from Lexington, Kentucky, the decision was never very hard for Young. He committed to Kentucky all the way back in 2013, and although he took several visits to other schools, he never went back on his initial decision.

After playing in the U.S. Army All-American Bowl out of high school, Young joined the Wildcats, where he was expected to contribute early on. He delivered on those demands, helping form one of the SEC’s best offensive lines in the 2017 season. Although he wasn’t yet a full-time starter, his impact was already felt.

As a true sophomore in 2017, Young’s workload increased. He played in all 13 games for the Wildcats and logged six starts at the left tackle position. The following season was expected to be a springboard toward a breakout junior campaign. However, in August leading up to the 2018 season, Young suffered a season-ending left knee injury, casting doubt over his outlook.

Incredibly, Young returned to full strength in 2019 and started all 13 games at left tackle, earning a full-time starting role. In 2020, Young was named a team captain, and he reprised his role as a starter at offensive tackle for Kentucky. This time, Young earned first-team All-SEC recognition from the coaches and was at last seen as the stalwart blocker he was recruited to be.

Landon Young certainly has the physical tools to be a worthwhile investment in the 2021 NFL Draft. The Kentucky offensive tackle earned a Relative Athletic Score of 9.18 at his pro day. At 6-foot-6, 310 pounds, he logged a 95th-percentile 1.72 10-yard split, a 30.5-inch vertical, a 108-inch broad jump, and 34 bench reps with arms that almost measure 34 inches.

From those athletic numbers, one can extrapolate that Young has the burst off the line, the length, and the raw strength and power to be a quality NFL lineman. However, on tape, Young sometimes falls short with his lateral mobility, knee bend, and ability to multitask. Young doesn’t always play to his quantified athletic capacity. This makes it unclear whether he can bridge the gap at the NFL level.

Nevertheless, Young was a standout for Kentucky’s offensive line. The Kentucky offensive tackle deserves consideration as a depth tackle, and he possesses enough size and athleticism to potentially develop into a starting offensive lineman.

Which teams make the most sense for Young?

PFN’s Chief Draft Analyst and NFL Insider Tony Pauline listed the Kansas City Chiefs, Indianapolis Colts, and Carolina Panthers as some of the best fits for Young. All three of those teams need more depth at tackle. Young can fill that need later on, and he also provides enough physical upside to warrant the use of draft capital.

Beyond those teams, the Atlanta Falcons, Denver Broncos, and Buffalo Bills also make sense. However, the fits are more wide-ranging later in the NFL Draft.

Wherever he goes, Young won’t be drafted as a starter. In fact, there’s a chance, with the depth of the tackle class, that Young seeps out of the NFL Draft pool altogether and becomes a free agent. Nevertheless, Young will earn a camp opportunity at some point, and he has the physical traits to be a developmental prospect worth keeping for a couple of years.