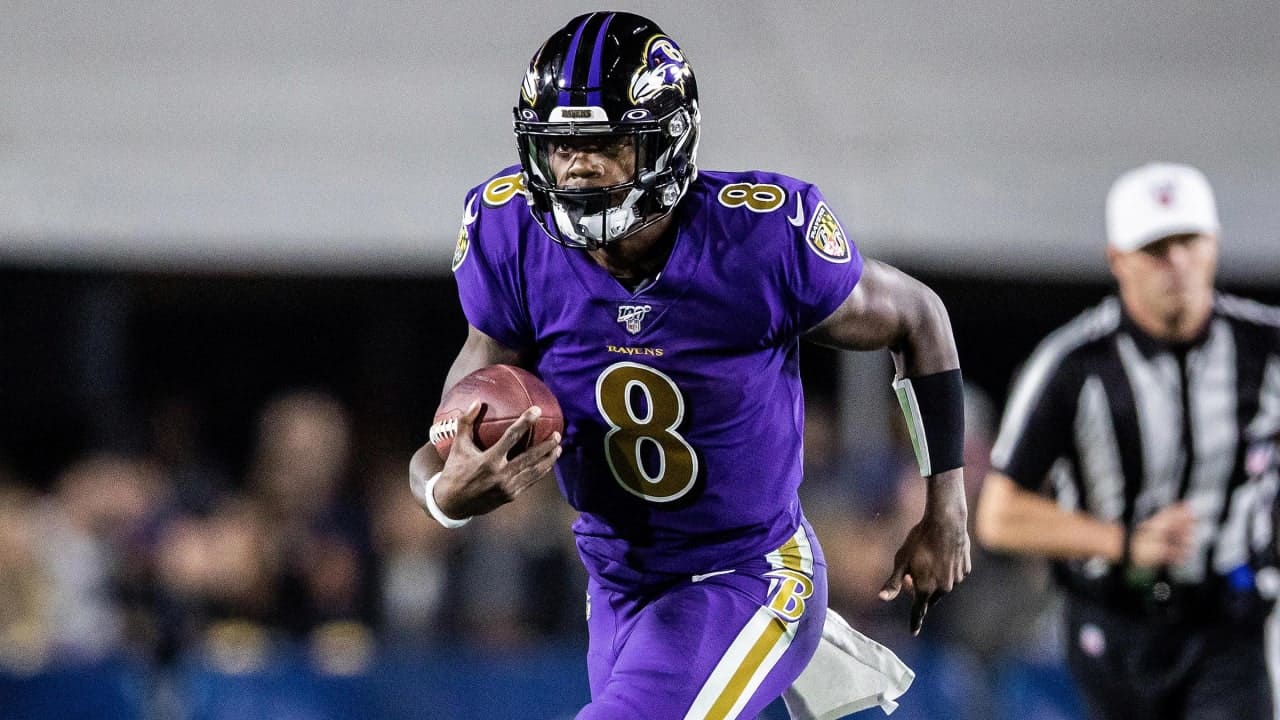 We’re not here to ask whether Lamar Jackson and the 2020 Baltimore Ravens can “learn how to win in the playoffs.” That’s a lazy bottom-of-the-message-board argument.

We’re also not here to ask whether the rest of the league will “figure Jackson out.” Defenses know what’s coming when they face the Ravens, just as they know what to expect when facing Tom Brady or Drew Brees. The problem is stopping it.

Instead, we’re here to ask the real questions the Ravens face as they try to turn last year’s 14-2 record and Jackson’s MVP season into this year’s championship.

What to expect from the Baltimore Ravens in 2020

The offensive line takes a step back due to retirements and injuries. The young receiving corps doesn’t quite come together. A 10-win season and another playoff loss raise further doubts about Jackson’s big-game capabilities and the viability of an option-fueled offense against top competition.

The Ravens led the NFL with 3,296 rushing yards, 991 yards more than the second-place 49ers. They averaged a league-high 5.5 yards per rush, 0.5 yards per rush more than the second-place Tennessee Titans and San Francisco 49ers. They also finished first in the NFL in passing DVOA and second to the New Orleans Saints in passer rating. You probably know most of this, but the enormity of the gap between their offense and the rest of the league last year is worth emphasizing.

The Ravens run defense, on the other hand, allowed 4.4 yards per rush (21st in the NFL) and got gouged in both the regular-season Browns loss and by Derrick Henry in the playoff loss to the Titans. Derek Wolfe (Broncos) is a reliable run plugger, Queen (LSU) is a speedy linebacker who can provide a presence the Ravens lost when C.J. Mosely left, and Campbell (Jaguars) is generally good at everything.

The Ravens were 17 of 24 on fourth down conversions, and they were the most aggressive team on fourth downs in history according to Football Outsiders’ metrics. The Ravens famously went 0-of-4 on fourth downs in their playoff loss, failing on two early 4th-and-short attempts. John Harbaugh’s fourth-down decision making is sound; he just needs to make sure that the execution is as flawless as possible.

Jackson attempted just 52 regular season passes when trailing by 10 or more points last year, the 36th highest total in the league; Josh Rosen and Luke Falk actually attempted more passes in that situation. Jackson’s completion rate while losing big was just 59.6, and his QB rating was a lowly 80.0. Jackson made great strides as a pocket passer last year, but he must still improve at moving the offense when defenses are no longer worried about the option game.

Yanda’s departure will hurt, and center Matt Skura (knee) started camp on the PUP list, complicating things on the interior line. The mix to replace Yanda includes rookies Tyre Phillips and Ben Bredeson, sophomore Ben Powers, and journeyman D.J. Fluker. Continuity on the line was a significant key to the Ravens’ success last year: Skura was the only starter to miss playing time.

The Ravens targeted their tight ends on a whopping 42% of passes, the highest total in modern history according to Football Outsiders Almanac. Meanwhile, Hollywood Brown was the only wide receiver targeted more than 50 times. All that should change with Hayden Hurst gone and Duvernay and Proche on the roster.

Sleeper seekers should keep an eye on second-year receiver Miles Boykin, a 2019 draftnik favorite who was barely involved as a rookie. Boykin is the closest thing to a true possession receiver on the Ravens roster.

In the backfield, Mark Ingram gets about 15 carries per week like clockwork and most of the goal-line handoffs. Rookie J.K. Dobbins (Ohio State) is the favorite to replace Gus Edwards as the oft-used changeup, but Edwards is still around. Justice Hill looked OK mopping up carries in 59-10 and 45-6 victories.

So you have an RB2, a handcuff/RB3 with extra dynasty value in Dobbins, and two guys to keep an eye on during weekly waiver claims or as cheap DFS fodder. Dobbins is the true wild card. He could either eat significantly into Ingram’s touches or get lost in the crowd.

Are the Baltimore Ravens a lock to make the playoffs in 2020?

The 2019 Ravens were a historically great team in many categories but were merely OK at stopping the run and throwing downfield in obvious passing situations. That made them vulnerable if a team took an early lead on them, and that’s exactly what happened in the playoffs.

The organization attacked those two weaknesses in the offseason, making them prohibitive favorites to at least reach the AFC Championship game. Bad organizations believe in good or bad playoff mojo (gives Titans the side-eye); good ones like the Ravens think rationally, act decisively, and put themselves in the best possible position to win.

NFL Recap from Mike Tanier
Every Sunday and Monday, Mike Tanier gives his NFL Recap of the biggest stories around the NFL. Click here for the rest of his takes on NFL Week 2 in the long-form format you’re used to seeing from Mike. For individual pieces, head on over to our NFL Recap page.
In this article:Devin Duvernay, Featured, featured, lamar jackson, Mark Ingram