By Lucas Ellinas
March 16, 2021
What's in this article? Click to show
Jackson has been historically great as a rusher
Lamar Jackson’s passing statistics give Baltimore reasons for not picking up his 5th-year option or an extension
Despite his flaws, the Ravens would be foolish not to pick up Lamar Jackson’s 5th-year option and give him a long-term extension
Want more NFL news and analysis?

In many ways, Lamar Jackson is a difficult player to evaluate. In his short career, he has been historically successful as a runner. However, his passing abilities haven’t always met the same standard as other quarterbacks in the NFL. Now, the Ravens must weigh the various aspects of his game to determine whether to pick up Lamar Jackson’s 5th-year option and/or potentially give him a long-term extension.

Jackson has been historically great as a rusher

You can’t talk about Jackson without mentioning his production on the ground. Although he’s only been in the NFL for three seasons, he might already be the best rushing quarterback the league has ever seen. His 1,206 rushing yards in 2019 were an NFL record at his position, and his career total of 2,903 yards ranks 12th all-time.

All of the players above Jackson on that list have significantly more time in the NFL than he does. The only player ahead of him to play fewer than 10 seasons is Russell Wilson (nine). At the top of the list is Michael Vick with 6,109 yards, so it seems like Jackson has a ways to go to catch him.

However, it might happen sooner than you think. Vick averaged about 436 rushing yards across his 13 seasons. Meanwhile, Jackson is currently averaging approximately 969 rushing yards in his three years in the NFL. At that rate, he’ll catch Vick in just four seasons. Regardless of what you think of Jackson overall, that is a staggering pace.

Although Jackson has been great on the ground, his passing abilities have often lagged. Statistically, he’s been reasonably successful, particularly during his MVP season, when he threw for 3,127 yards and 36 touchdowns. However, his advanced metrics have generally been underwhelming.

The Offensive Value Metric (OVM), a grading system created by the (Bx) Movement to evaluate players based on how efficiently they produced their statistics, hasn’t graded Jackson particularly well. In 2018, he received the fifth-lowest overall grade amongst all quarterbacks (17.25). His grade improved significantly during his second season, rising to 24.01, before falling back slightly in 2020 to 22.41.

During his second and third seasons, Jackson’s grades indicate that he was far more impactful on Baltimore’s offense than he was as a rookie. On the other hand, they still aren’t exceptionally high. They ranked 14th and 29th during their respective seasons. While Jackson has clearly become a better passer, he still isn’t contributing as much through the air as many other quarterbacks.

The most important factor in determining Lamar Jackson’s OVM grades so far in his career has been his completion statistics, a true crux in the 5th-year-option decision. In 2020, he completed a notably low 64.4% of his passes. Even worse, that number was -0.9% lower than expected according to the NFL’s advanced metrics. Both of those statistics ranked in the bottom half of the league.

However, as with his overall grades, Jackson has shown significant improvement from his rookie season, when he was one of the NFL’s worst-performing quarterbacks in both categories. His completion percentage of 58.2% was 5.3% lower than expected. Each of those metrics ranked fourth-worst among all qualifying quarterbacks in 2018.

Jackson still isn’t an elite passer, but he’s made clear progress. If he were still playing at the level he did during his rookie season, this discussion might look quite different. As it stands, though, Lamar Jackson’s improvements in this area will likely go a long way towards convincing the Ravens to pick up his 5th-year option and giving him an extension in the future.

Jackson was wildly inconsistent as a passer in 2020

Another concern found in Jackson’s advanced metrics last season was his inconsistency. Take a look at the chart below. The black dots represent Jackson’s weekly grades, while the yellow line shows the league average for quarterbacks during the regular season. 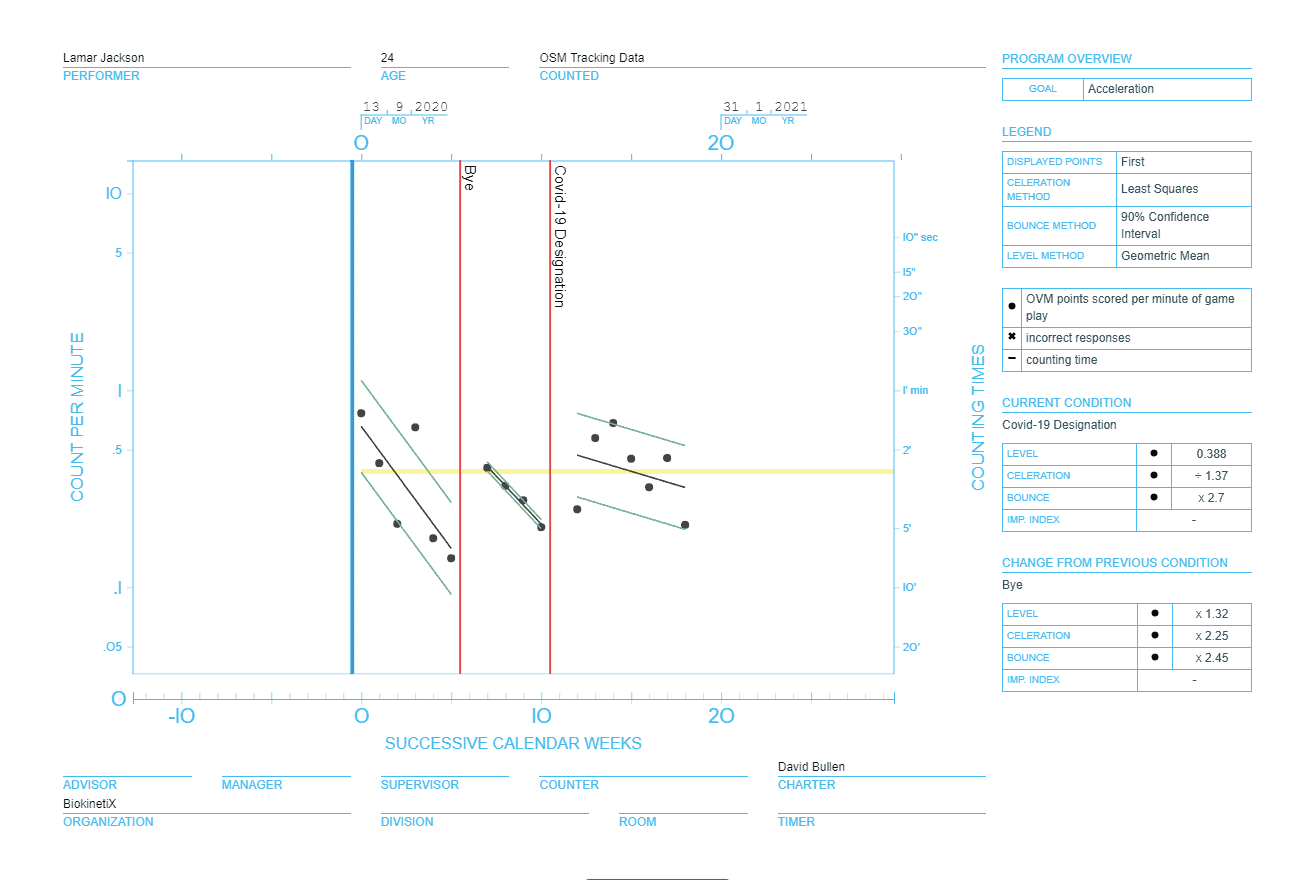 As you can see, Jackson’s grades varied dramatically throughout the season. They ranged from a high of 45.91 in Week 1 to a low of 8.43 in Week 6. Thanks to his rushing abilities, being a consistent passer is less critical for Jackson than for other quarterbacks. However, it can still cause serious problems. If a quarterback has a poor performance during a critical game, it can ruin your team’s entire season.

On the other hand, a string of peak play at the right time might be enough to win a Super Bowl. Ravens fans should be familiar with that concept since it happened with Joe Flacco during the playoffs the last time Baltimore won the Super Bowl. Still, I’m sure the Ravens would prefer more consistency from the position.

Despite his flaws, the Ravens would be foolish not to pick up Lamar Jackson’s 5th-year option and give him a long-term extension

Jackson isn’t an elite passer. He might never be. But he is a stellar runner, and you can’t deny that his run-focused style is working. Wins aren’t a quarterback statistic, but it’s impossible to ignore how successful the Ravens have been under Jackson. He has just seven losses in his first 37 regular season starts, and Baltimore made the playoffs in each of his first three seasons.

It’s true that Jackson’s playoff record could be better and that certain adjustments need to be made to accommodate his specific playing style. As such, the Ravens can’t ignore the success he’s had simply because of those potential problems. They should do what they can to keep him in Baltimore for as long as possible, at minimum picking up his 5th-year option.