Breakout TE Logan Thomas still has room to improve in 2021

By Lucas Ellinas
July 19, 2021
What's in this article? Click to show
Kyler Murray’s rookie year was good, but last season was even better
Murray also improved his advanced metrics in 2020
Murray and the Cardinals’ offense could be even better next season
Want more NFL news and analysis?

Kyler Murray had an excellent rookie season with the Arizona Cardinals, affirming Kliff Kingsbury and the Arizona front office’s decision to draft him first overall. Murray followed up his standout debut with an even better sophomore season, and the advanced metrics suggest that there might be even better in store for him and the Cardinals’ offense in 2021.

Kyler Murray’s rookie year was good, but last season was even better

It’s no understatement to say that Murray had a spectacular rookie year. He totaled 3,722 yards, 20 touchdowns, and 12 interceptions through the air, along with 544 yards and 4 touchdowns on the ground on his way to winning Offensive Rookie of the Year.

That is a solid start, but it pales in comparison to what he did in 2020. Last season, Murray threw for the same number of interceptions but increased his other passing totals to 3,971 yards and 26 touchdowns. His rushing totals increased as well, to 819 yards and 11 touchdowns. Those improvements led to Murray making his first Pro Bowl and has him looking like a legitimate NFL star and Kingsbury looking like a genius.

Along with the better box score, Murray’s advanced metrics were far better in his second season in Kingsbury’s offense. As evidence, let’s look at how he performed according to the Offensive Value Metric (OVM), a grading system created by the (Bx) Movement to evaluate players based on how much impact they had on the creation of their statistics, rather than the statistics themselves.

Murray did extremely poorly on this metric during his rookie year, earning a grade of just 19.64. That grade ranked 30th out of 39 qualifying quarterbacks. In his second season, however, Murray was miles better, with a grade of 25.21, which ranked 16th. In one offseason, he transformed from one of the league’s least effective passers into a player who consistently provides excellent value to his offense through the passing game.

To gain further context for Murray’s OVM grades in Kingsbury’s offense, let’s look at how he performed on a week-to-week basis. In the charts below, you can see his weekly grades from 2019 and 2020, marked by the black dots. For comparison, the season average OVM grade for wide receivers from those years is represented by the yellow lines. 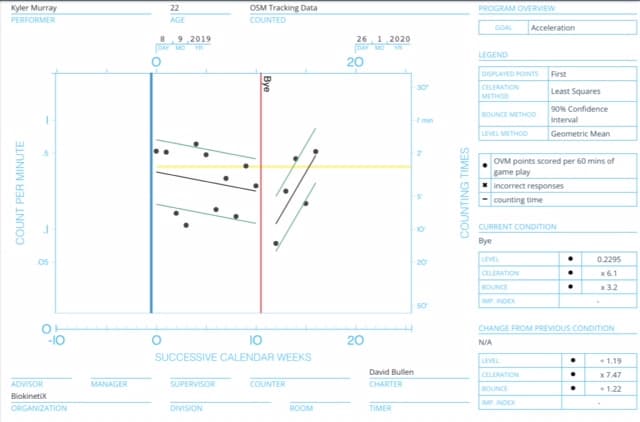 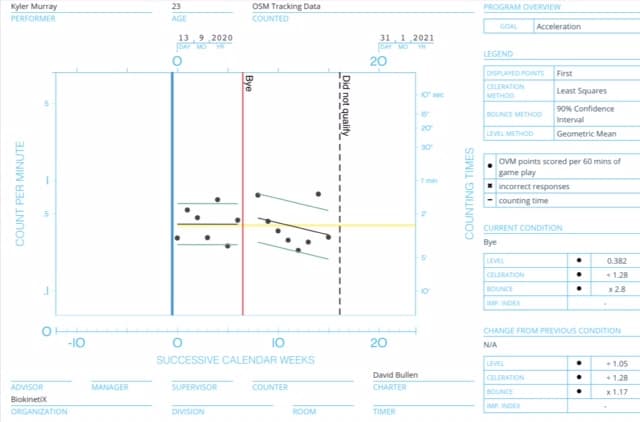 As you can see, Murray has been highly inconsistent in both of his first two NFL seasons. In 2019, he earned four grades above 30 points, which represent reasonably effective performances. Unfortunately, he also received five grades below 10 points.

During those weeks, he provided almost nothing to the Cardinals’ offense as a passer. There was a difference of more than 30 points between his highest grade (36.09 in Week 5) and his lowest — an abysmal 4.43 in Week 13.

In 2020, that inconsistency was still there. In fact, the gap between his best and worst grades was almost exactly the same. The difference was that both his highs and lows increased by about 10 points, rising to 45.1 and 13.93, respectively.

Across the entire 2020 season, Murray totaled three games with grades above 40 and seven below 20. Taking the season as a whole, all of Murray’s grades shifted upward, even if the level variance didn’t change.

If Murray continues to increase his overall level as a passer next season, or if he can reduce the number of below-average games he produces, he will be one of the NFL’s highest-value passers.

In order to explain the improvement in Murray’s OVM grades in his second season, we need to look at the advanced metrics involved in calculating quarterback grades. In many ways, Murray’s advanced metrics actually stayed consistent during his first two seasons.

He threw the ball slightly further downfield in Year 2 — 7.1 air yards on average across all of his attempts and 5.1 air yards on completions in 2019, compared to 8.0 and 5.9 air yards in 2020. However, he also threw into tight windows slightly less often, the percentage dropping from 14% to 13.3%.

Put simply, while Murray’s actual completion percentage only increased by a small amount, he overperformed in 2020 where he underperformed as a rookie.

Murray and the Cardinals’ offense could be even better next season

Arizona added a number of players during the offseason that should make Murray’s job significantly easier in 2021. Signing A.J. Green can’t hurt, even if the veteran wide receiver hasn’t played at a high level for several seasons. The drafting of explosive wide receiver Rondale Moore could wind up being more impactful. If either of those additions bears fruit, the Cardinals’ offense will be even more dangerous than it was a season ago.

Combine that with the defensive upgrades Arizona made, and the team will undoubtedly improve next year, even if Murray only plays at the same level he did last season. If he improves even further, the Cardinals might transform from a dark horse playoff candidate into a legitimate contender.

Breakout TE Logan Thomas still has room to improve in 2021