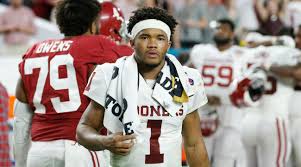 Photo Credit: Sports Illustrated
What's in this article? Click to show
What Happened?
What Did Schefter Say?
What Did Schefter Mean?
How Did We Get Here?
This Would Be Unprecedented
Does This Even Make Sense?
Twittersphere for the Win

It took less than 24 hours after Kliff Kingsbury was introduced as the Arizona Cardinals new head coach for Twitter to do it’s thing. If you glanced at the “trends for you” section of Twitter on Friday morning, you may have noticed Josh Rosen’s name. If you have an inquiring mind, you may have investigated as to why Rosen was trending.

This would have lead to you finding out that Twitter is running rampant with a preposterous roster management concept based on an October sound byte from Kingsbury, and the erroneous headlines attributed to an Adam Schefter interview with Mike Greenberg.

A video of Kingsbury from October of 2018 has been making the rounds. In the video, Kingsbury gives high praise to Kyler Murray. Hesays “I would take him with the first pick of the draft if I could.” During this same time span, Adam Schefter said it was not “implausible” for the Cardinals to draft Murray and trade away Rosen. There is a ton more context to this quote, which we will get to later, but the Twittersphere did it’s usual misguiding non-sense, and posted the video with headlines like “Cardinals might be open to drafting Kyler Murray 1st overall, trade away Josh Rosen, per Adam Schefter”

This culminated in click-bait gold mines, declaring this quarterback switch “could reportedly” happen, despite such a claim being grounded in no reality whatsoever. Such misinformation then manifested itself one more butterfly-wing flap further to other fan bases of other teams deeming Rosen available for their first round pick.

My friend, who is a New York Giants fan, sent me this exchange with her dad from this morning, asking if such a possibility were true (and yes I corrected that the Giants hold the 6th pick, not the 5th pick). Everyone wins, right? Kingsbury gets his dream quarterback, the Giants end up with Barkley and one of the quarterbacks they passed on for the running back, and the Cardinals still have a high draft pick to improve the roster.

Snap back to reality. This is *never* going to happen. I cannot stress that enough. And this entire debacle is directly tied to the negative side of the 24/7, click-bait-we-need-page-views, Twittersphere misrepresentation, news cycle era in which we live.

What Did Schefter Say?

Apparently no one took the time to watch the video clip of the Schefter interview. Well here is the full context of his quote, when asked if the Murray/Rosen swap is within the realm of possibility:

“The one thing about the NFL is that quarterbacks are currency. And I can tell you this – last year, when the Cleveland Browns had the first, and fourth overall picks, at one point in time – I know people will be skeptical of this – they considered taking quarterbacks at one AND four, and then auctioning off one of the quarterbacks that they liked less. So if you’re the Arizona Cardinals, and you like Kyler Murray that much – it’s hard to imagine him going number one overall – but maybe there’s a scenario that you get him and then you auction off Josh Rosen. If that’s what the new [coach] likes, that’s what he wants, why would you not acquiesce to that, when you could get a king’s ransom for Josh Rosen who some teams really like. Again, we’re getting things started here really early, and really putting things out there, but it’s not implausible that that scenario could unfold.”

There’s a lot to unpack here. The crux of this entire concept is that Schefter is citing an idea floated about in the Cleveland Browns organization leading up to the 2018 draft that they could take quarterbacks at both number one and number four, and then hold an auction with teams wanting to trade for one of the two. And wouldn’t you know it, that never came to fruition. The Browns took the quarterback of their choosing at one, Baker Mayfield, and took the highest rated player on their board remaining at number four, Denzel Ward.

What Did Schefter Mean?

This bares repeating: Schefter referenced an idea about auctioning off two quarterbacks, an idea that never transpired, that was talked about inside an organization that is *not* the Cardinals.

Schefter also carefully chooses his words. He ends the theory by saying “we’re getting things started here really early, and really putting things out there.” He is acknowledging the fact that in less than 24 hours of the Cardinals introducing Kingsbury as head coach, he is now on national television conjuring up fanciful draft/trade scenarios.

What Schefter explicitly does not say is anything close to the words, “per sources,” “according to sources,” “I’ve already heard that,” “executives say this bares watching,” etc, etc. None of this is reporting. All of this is conjecture. This idea is not “reportedly” possible just because you wrote it in a headline.

You know who did actual reporting on the matter? Ian Rapoport. Want to know what he reported regarding this matter? “Checked with a high-ranking #AZCardinals source, who called this notion of trading QB Josh Rosen: ‘Ludicrous. Not Happening.”

Schefter’s “implausible” comment was geared toward expressing the state of the NFL pertaining to how much value quarterbacks have. The Indianapolis Colts practically remade their entire roster into a playoff caliber team with the return of Andrew Luck, and a single trade with the New York Jets.

How Did We Get Here?

Of course, Schefter isn’t to blame for any of this. This is on the media, and on Twitter. Any blue check verified account that put this out there with the notion that the Cardinals “might be open to” this Murray-draft/Rosen-trade quarterback swap, citing “per Adam Schefter,” committed an exceptionally inexcusable dereliction of duty.

Schefter is a leading NFL insider. His entire job is to break news, be it trades, draft targets, draft picks, coaching hires, or just drama. Using the word “per” in front of Schefter’s name insinuates that what is to follow is sourced based reporting. That’s the network associate of connectivity that all of us football fans have with the words “Adam Schefter.”

Maybe, “Adam Schefter floats theory about Cardinals future quarterback situation” isn’t as sexy a tweet or headline as you wish it were, but it’s more intellectually honest than what sparked this rapidly spread drivel.

This Would Be Unprecedented

As for the mechanics of the trade itself, such a move would be unprecedented. Since the 1970 merger, 107 quarterbacks have been drafted in the first round. Precisely *zero* of those quarterbacks failed to make it to a second season with the team that drafted them.

Most of these quarterbacks fit nicely into a single bucket – A back half of the first round pick that didn’t pan out and the team moved on. Others had some extracurricular activities derail their careers; Marinovich, Manziel. Marinovich flamed out of the league so hard he ended up getting a 30 for 30 about him and he still got two years on his original team.

Does This Even Make Sense?

Rosen being moved after his rookie season would be first instance in NFL history in which such a transaction would be consummated. The odds are outlandish enough, but if there was a new general manager in town (i.e. John Elway) the theory would have a stronger case.

But there’s not. General manager Steve Keim, the guy that traded up to draft Rosen, remains. If the guy that drafted the quarterback is still in the building, that guy is going to give that quarterback every shot possible to succeed. Keim is not going to walk away from Rosen after one season in a public move that signals he was wrong and the newly hired Kingsbury is calling the shots now.

There is also the financial component. Trading away Rosen would cause the Cardinals to eat $10.4 million dollars in cap space since Rosen’s contract is fully guaranteed.

Kingsbury was brought in to fast track Rosen’s development, and before Kingsbury could even finish compiling a coaching staff, Twitter was sending Rosen to the Giants and pre-ordering Kyler Murray Cardinals jerseys.

Twittersphere for the Win

None of this ever had traction. Schefter floated an idea based on a premise that because quarterbacks hold so much value, if the Cardinals absolutely love Murray, they could move Rosen for a ransom. There are so many if’s and contingencies to what Schefter said, and absolutely no sources or reporting to it at all.

But that doesn’t make for flashy headlines.