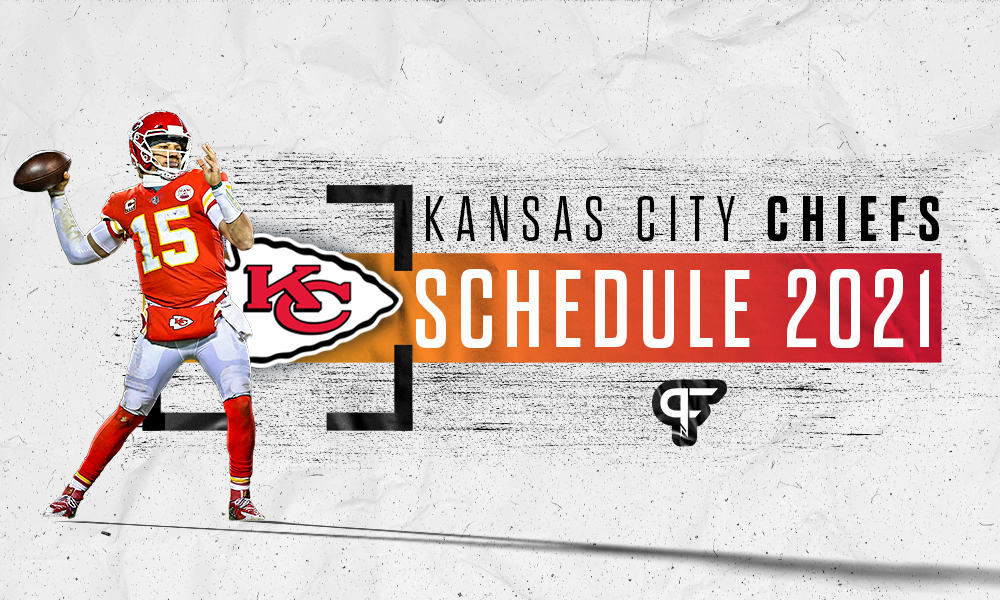 What is the Kansas City Chiefs’ 2021 NFL schedule, how many primetime games do they play, and who are the toughest and easiest opponents on their schedule this season?

How many primetime games do the Chiefs play in 2021?

When is the Chiefs’ bye week?

The Chiefs 2021 schedule essentially ranks in the middle of the pack in terms of strength of schedule. They are tied with the Minnesota Vikings for the 14th-toughest schedule. Kansas City has a slightly more difficult home schedule (ninth-toughest) than road schedule (10th-easiest).

When you look at how the Chiefs’ 2021 schedule breaks down, it is very much an even split. 11 of their 17 games come against teams projected to win between 7.5 and 10 games next season. Three bouts then come against clubs predicted to win more than 10 games. Those clubs are the Buffalo Bills, Baltimore Ravens, and Green Bay Packers.

The matchups with the Bills and Ravens will not scare the Chiefs. In 2020, they defeated the Bills in both the regular season and the AFC Championship Game. Additionally, Patrick Mahomes has led the Chiefs past Lamar Jackson’s Ravens team in each of the past two seasons.

The bout with the Packers has the potential to be the game of the year. The prospect of Mahomes and Aaron Rodgers meeting in the Super Bowl was a mouth-watering prospect last season. However, we may once again be stopped from seeing that if the situation between Rodgers and the Packers is not resolved ahead of the 2021 season.

The Chiefs will also play three games on their 2021 schedule against teams anticipated to win seven contests or fewer. Those games will be played against the New York Giants, Cincinnati Bengals, and Philadelphia Eagles. All three of those teams are in an intriguing situation with young QBs. The Bengals and Joe Burrow are perhaps the biggest unknown in terms of the potential ceiling. Yet, the Eagles with Jalen Hurts could cause problems with an offense that will likely utilize multiple styles. It would be a huge surprise if the Chiefs do not win all three of these games.

It is hardly a shock that the Chiefs enter the 2021 season with the highest projected win total, and a middle-of-the-pack schedule only helps matters. Kansas City will be looking to make it three straight Super Bowl appearances and four straight AFC Championship Game appearances this season. Based on their schedule, there is little standing between them and clinching yet another No. 1 seed in the AFC.

Battles with the Bills and Ravens will be key moments, as well as how the Chiefs’ division rivals develop next season. If Mahomes stays healthy, 12 wins should realistically be the Chiefs floor in 2021.