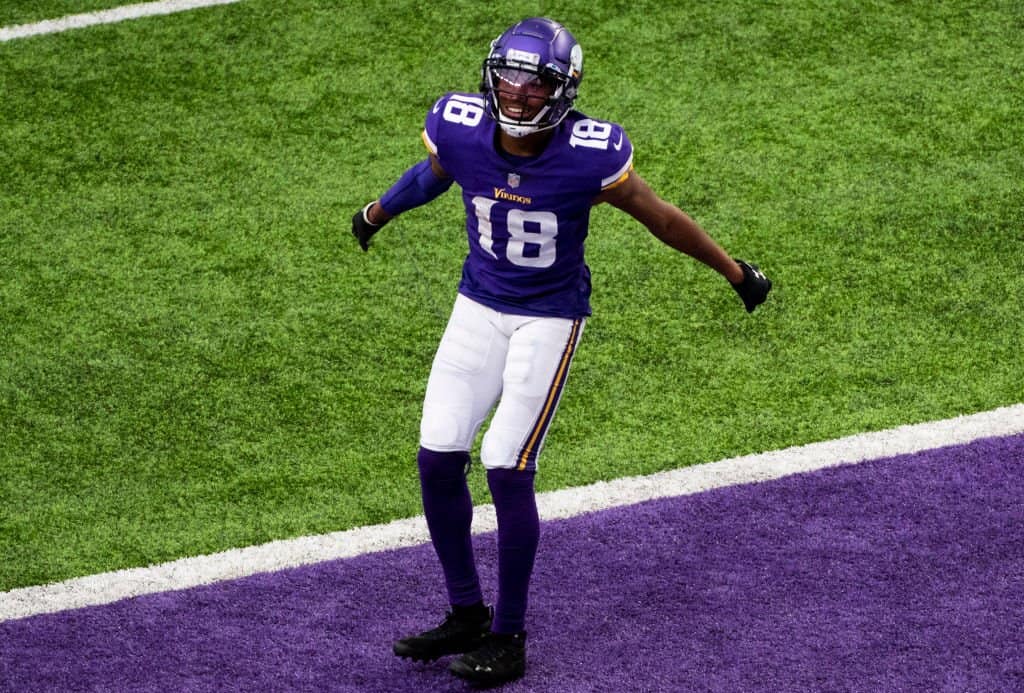 (Photo by Stephen Maturen/Getty Images)
What's in this article? Click to show
Justin Jefferson has maintained his college success into the start of his NFL career
Justin Jefferson’s advanced metrics rank near the top of the league
Will Minnesota find a new quarterback during the offseason?

The Minnesota Vikings cannot be happy with their performance so far this season. I don’t know what their expectations were internally before the year began, but I feel relatively confident that they set the bar higher than being one of the worst teams in the NFL. However, they have had one notable bright spot, rookie Justin Jefferson.

The team drafted Jefferson in order to help compensate for the loss of Stefon Diggs, who was traded away to the Buffalo Bills during the offseason. No rookie was ever going to be able to fully replace Diggs, who spent five seasons in Minnesota as part of a dangerous one-two punch at wide receiver alongside Adam Thielen, but Jefferson has done a better job than most would have anticipated.

Jefferson currently ranks 10th in the NFL with 537 receiving yards, and he has played in one fewer game than eight of the nine players ahead of him. And while he only has three touchdowns, that is in part because most of the Vikings receiving touchdowns have been hogged by his teammate, Thielen, who is tied for the league lead with seven. On the whole, it is a stellar start for the rookie, which is fortunate for Minnesota because not much else has gone right for them so far this season.

On the surface, Jefferson’s success isn’t that surprising. It’s true that in his final season at LSU he was often outshone by his younger teammate Ja’Marr Chase. However, the National Championship-winning LSU offense was so prolific under eventual first-overall selection Joe Burrow that Jefferson still caught 111 passes (tied for first in Division 1) for 1,540 yards (third) and 18 touchdowns (second).

That said, there have been plenty of high-profile wide receiver prospects that were not immediately successful in the NFL, at least not to the same degree as Jefferson has been. It isn’t that common for a rookie to translate their college success to the pro level quite so quickly. So, let’s use the Offensive Value Metric (OVM) grade, a grading system created by the (Bx) Movement to measure how important a player was to their offense, to break down what has made Jefferson so successful in his debut NFL season.

So far this season, the OVM has given Jefferson a grade of 37.98, making him the highest-graded rookie in 2020 and the sixth-highest graded wide receiver. The players ahead of him are a who’s who of elite NFL wide receivers: Deebo Samuel, Davante Adams, Tyler Lockett, and Chris Godwin all make the list. The only lesser-known name is Demarcus Robinson of the Kansas City Chiefs.

So, why does Jefferson rank just behind these stars, and ahead of so many other NFL elites at his position? Well, his advanced statistics are excellent across the board, but two in particular stand out. The first is the catch percentage, arguably the most important metric for evaluating wide receivers. After all, while there are numerous essential components to playing the position at a high level, from running the proper routes to eluding defenders once the ball is caught, none of them matter if the receiver in question cannot catch the ball. Jefferson has excelled in this area. His catch percentage of 77.8% ranks 12th among qualifying wide receivers, indicating that, despite his inexperience, he has already proven himself to be a reliable target.

The other important factor when determining Justin Jefferson’s OVM grade is his ability to create extra yards once the ball is actually in his hands. Thus far this season, he has averaged 6.8 yards after the catch (YAC), tied for 10th in the NFL among qualifying wide receivers. On its own, that is an impressive total.

However, it is not necessarily a reflection of how impactful he was on Minnesota’s offense. Imagine a scenario in which a wide receiver catches the ball on a trick play that fools the defense completely, and they now have 40 yards of open field in front of them. The vast majority of NFL wide receivers would be fully expected to gain those yards. Your team doesn’t need Odell Beckham Jr. for that play to result in a huge gain.

Therefore, in order to properly evaluate Jefferson’s performance, we need to put his statistics in context. Fortunately, the NFL has the answer to this problem. Using numerous on-field factors, their statisticians calculate the YAC that each player should have averaged in theory. In Jefferson’s case, his average was actually 2.7 yards higher than expected, tied with A.J. Brown for the third-highest differential in the league. This statistic clearly shows just how valuable Jefferson is to the Vikings offense. He gains almost three yards more than the average NFL wide receiver would have. That might not sound like much, but it really adds up over the course of a game.

Will Minnesota find a new quarterback during the offseason?

In spite of Justin Jefferson’s best efforts, the Vikings appear to be in a race to the bottom of the NFL standings. With five losses already on the books, their hopes of a playoff berth already seem damaged beyond repair. Fair or not, Kirk Cousins will likely get a great deal of the blame for this failure.

Fortunately for Minnesota, at the end of the season, the worst team in the NFL will get quite the consolation prize: a chance to draft Clemson Tigers star Trevor Lawrence (assuming he doesn’t decide to return for his senior season). I can’t say for certain whether or not the Vikings are intent on drafting a quarterback this offseason, but I doubt they would pass on the opportunity to select Lawrence if he falls into their lap (or they fall into his, to put it more accurately).

However, Minnesota has some tough competition for this opportunity. There are currently six other teams with one win or fewer, including the 0-7 New York Jets. The Vikings are a bad team, but I’m not sure they’ll be quite bad enough to overtake the other contenders.

However, even if they can’t quite land Lawrence, they might position themselves to select one of the draft’s other premier quarterbacks, such as Justin Fields or Trey Lance. Or maybe they’ll decide to stick it out with Cousins for one more season and take a player at another position of need. Regardless, the team can feel confident in the fact that their quarterback, whoever it might be, will have an excellent young wide receiver to support them.