Josh Allen might be the most improved player in the NFL over the last three seasons. He looked like a potential bust as a rookie, but has improved each subsequent year dramatically. In 2020, he led the Buffalo Bills to the AFC Championship, earning the franchise their first playoff win since 1995 in the process. That level of success has made the idea of the Bills picking up Josh Allen’s 5th-year option and giving him a long-term extension significantly more palatable than it was even one year ago.

During each season of his young career, Allen has seen almost miraculous statistical improvement. The chart below shows his statistical progression since he entered the league in 2018.

Allen’s rookie statistics were unimpressive, to say the least. He was among the worst starting quarterbacks in the NFL. However, he improved significantly on every relevant statistic the following year.

Then, in 2020, his developments were even more dramatic. He threw for nearly 1,500 more passing yards and 17 more touchdowns, in addition to increasing his completion percentage by about 10%. That level of progress in such a short amount of time is genuinely staggering. Allen went from being one of the NFL’s worst starting quarterbacks to an MVP candidate in just three seasons. Just imagine where he’ll be a year from now.

The advanced metrics confirm what Allen’s traditional statistics tell us. According to the Offensive Value Metric (OVM), a grading system created by the (Bx) Movement to measure how impactful a player was on their offense relative to their role in it, Allen has become a more effective player with each season he has been in the NFL.

During his rookie year, he received a grade of 14.49, which ranked 38th among 39 qualifying quarterbacks. Then, during his sophomore season, his grade improved to 20.41. While not a fantastic grade, it elevated him to 28th during that season.

In 2020, his grade again increased by about six points to 26.75, which ranked eighth in the NFL. In short, over the course of three seasons, he went from one of the least efficient quarterbacks in the NFL to one of the most efficient.

Explaining why Allen’s grade was so high in 2020

Since Allen earned such a high OVM grade last season, it should come as no surprise that he performed well on many of the advanced statistics that go into calculating a quarterback’s grade. He threw the ball an average of 8.8 yards downfield on all of his pass attempts, which ranked 10th among all quarterbacks last season.

His average only on completions was 6.9 yards, which was tied for seventh. Allen’s completion statistics look even better, with his completion percentage 69.2% ranking fourth, while also being 4.6% higher than expected (a differential that ranked second). Put simply, Allen threw the ball further downfield than most other quarterbacks but still completed passes at a higher rate than his competitors.

Josh Allen’s 2020 season was remarkably consistent, giving the Bills more reason to use the 5th-year option or a long-term extension

Another impressive facet of Allen’s breakout 2020 season was his consistency. You can see clear evidence of that in the chart below. The black dots represent Allen’s weekly grades, while the yellow line represents the average OVM grade for quarterbacks during the regular season. 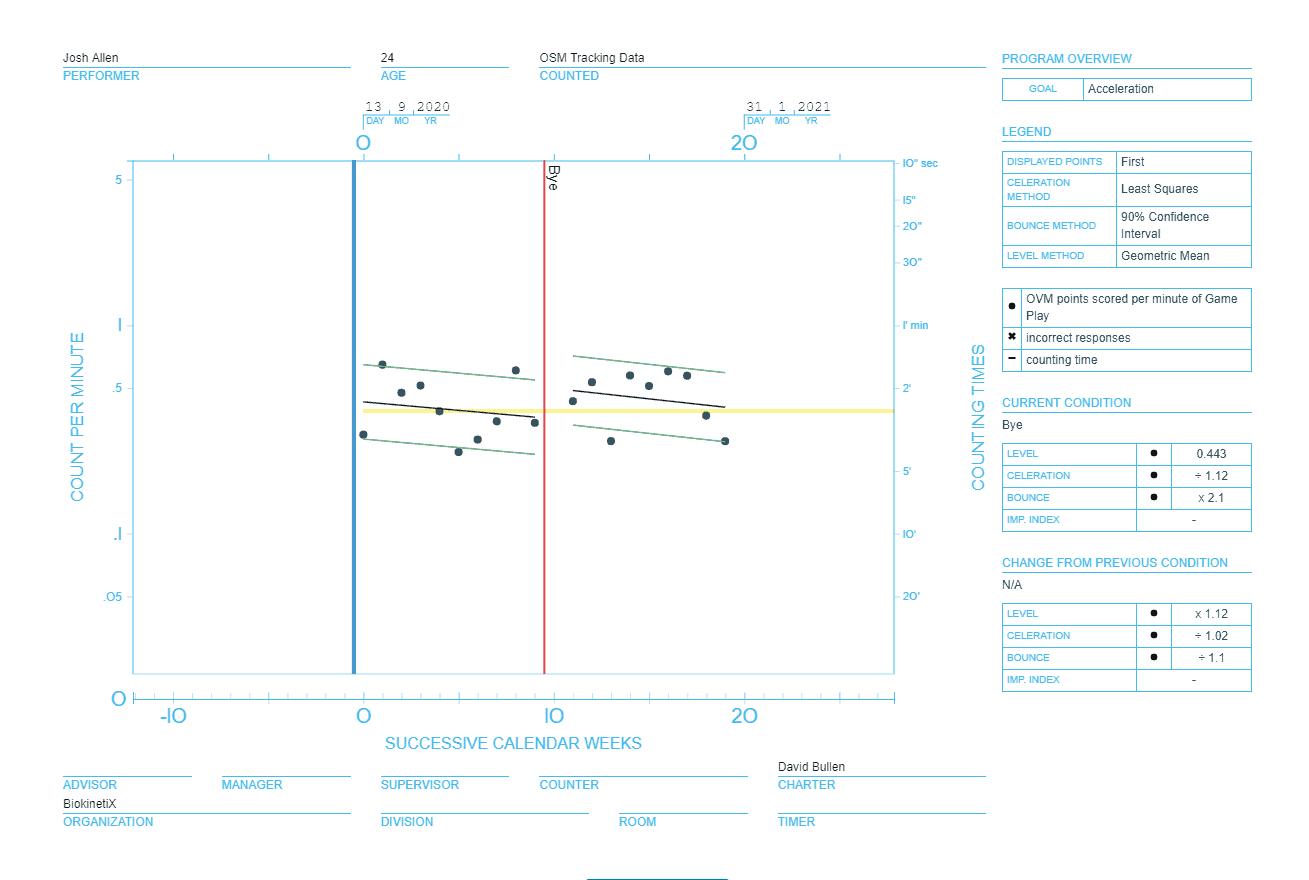 As you can tell, Allen was remarkably consistent. Yes, there is some variance in his grades, but he avoided the massive peaks and valleys that appear on some other player’s charts. For a player who has a reputation for inconsistent play, that is an excellent sign.

Allen’s passing abilities took some time to develop. However, his competence as a runner was immediately apparent when he entered the NFL. He rushed for 631 yards and 8 touchdowns during his rookie year and has ranked inside the top 10 in rushing yards by quarterbacks in each of his first three seasons.

He might not be the best rushing quarterback in the league (at least not so long as Lamar Jackson is playing at a high level), but he is certainly in the top 10. And now that his passing statistics have caught up, Allen is a genuine dual-threat in a way that few other quarterbacks can match.

Given his dramatic improvements throughout his young career, giving Josh Allen an extension seems like a no-brainer. Despite a rocky start, he has become one of the most exciting young quarterbacks in the NFL. It’s possible, of course, that he will take a step back in the coming seasons. His rise was sudden and dramatic, and his fall could be equally so.

That said, it seems just as reasonable to suggest that Allen will stay the course, maintaining his current level of play or even continuing to improve. After all, he hasn’t shown any signs of regression. The coaching staff around him has remained largely the same, with offensive coordinator Brian Daboll not being given a head coach position during the offseason.

Barring a dramatic shift, Allen seems set to be a force in the AFC for years to come. The Bills would be smart to make sure he spends those years in Buffalo.