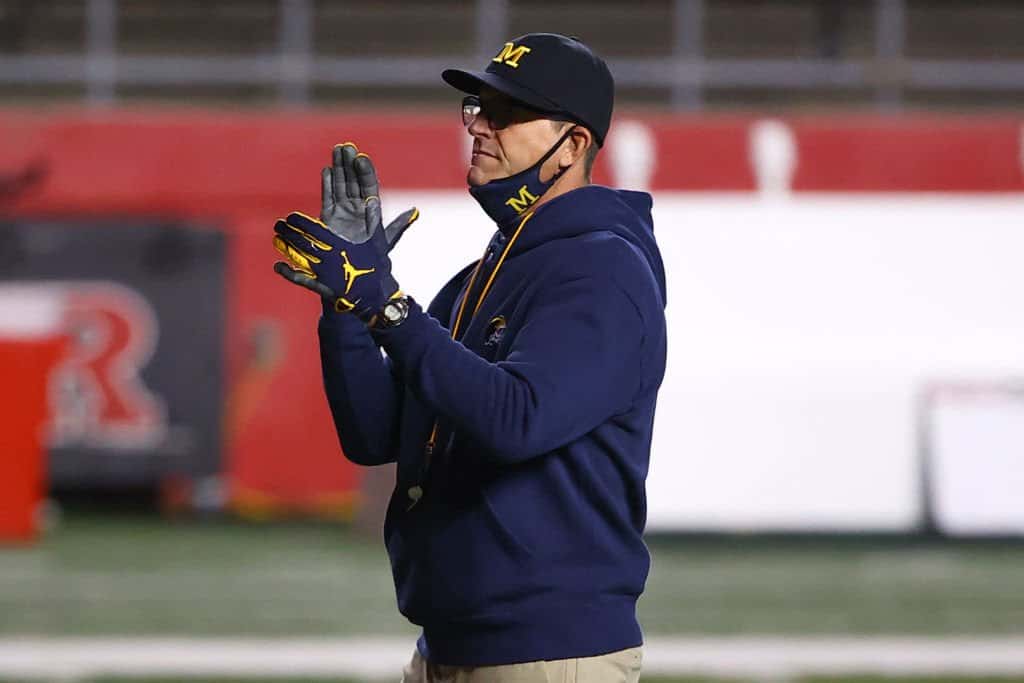 PISCATAWAY, NJ - NOVEMBER 21: Michigan Wolverines head coach Jim Harbaugh on the field prior to the college football game between the Rutgers Scarlet Knights and the Michigan Wolverines on November 21, 2020 at SHI Stadium in Piscataway, NJ. (Photo by Rich Graessle/Icon Sportswire via Getty Images)
What's in this article? Click to show
Jim Harbaugh’s early coaching career
Making a success of the San Francisco 49ers
Jim Harbaugh’s time as Michigan’s head coach
Teams rumored to be interested in Harbaugh as head coach

During his playing days, Jim Harbaugh earned the nickname the “Comeback Kid”. After several years out of the NFL, is a comeback in the cards for the former San Francisco 49ers head coach or will he remain at the Michigan Wolverines?

Update January 08: According to ESPN’s Adam Schefter, Jim Harbaugh and the Michigan Wolverines have reached an agreement on a contract extension. It looks like he will not be heading to the NFL after all.

A career in coaching seemed destined, almost pre-determined for Jim Harbaugh. His father, Jack, was a well-traveled high school and college football coach and the apple fell extremely close to the tree. So close, in fact, that Jim would follow the footsteps of his father to multiple schools over the course of his coaching career.

Where most players wait for their playing career to end before reaching for the clipboard, Jim found a way to merge multiple roles. Harbaugh was a first-round pick of the Chicago Bears in the 1987 NFL Draft but once he left the Bears for the Indianapolis Colts he found himself a Saturday job.

On a Sunday he would be Jim Harbaugh, NFL quarterback but on a Saturday he was an assistant coach for his father at Western Kentucky. With the official title of “offensive consultant,” the younger Harbaugh would also be responsible for recruitment. It would be a skill that he would put to good use further down the road.

Once his playing career came to an end, Harbaugh put his skills to use as the quarterbacks coach for the Oakland Raiders. However, it wouldn’t be long until he landed his first head coach role at San Diego. In three years with the Toreros, Harbaugh amassed a 29-6 record and guided San Diego to two Pioneer League titles.

Success at San Diego led Harbaugh to an old stomping ground at Stanford. The Cardinal had gone five years without a winning season, with Harbaugh inheriting a 1-11 team from the 2006 campaign. The Stanford turnaround was slow but ultimately successful. Harbaugh oversaw a 29-21 record, two Heisman finalists, and secured the first Stanford bowl game win since 1996.

In his final season in charge Stanford finished with a 12-1 record. Harbaugh’s achievement was recognized with the 2010 Woody Hayes Coach of the Year Award.

Making a success of the San Francisco 49ers

Despite a 2009 flirtation with the New York Jets, his success at Stanford led him to the San Francisco 49ers. Once again, Jim Harbaugh was tasked with turning around a team starved of success. The 49ers hadn’t had a winning season since 2002, with their Super Bowl XXIX success a distant memory.

Unlike at Stanford, the success came thick and fast for Harbaugh at the 49ers. With a 13-3 record in 2011, Harbaugh was voted the AP NFL Coach of the Year. Despite the offensive nature of his coaching introduction, the 49ers excelled defensively under Harbaugh.

They had the best rushing defense in the NFL that season and continued to be defensively strong throughout his tenure. Combined with a simple power run offense, with two tight sets, and an emphasis on play action passing, the 49ers became one of the most difficult teams to stop in the NFL under Harbaugh.

From success to sour relationship with San Francisco

In just his second season as NFL head coach, Harbaugh led the team to the Super Bowl and NFC Championship. Dubbed “The Harbaugh Bowl” as Jim faced brother John, the 49ers lost to the Baltimore Ravens despite a spirited second half fightback.

Although 2013 saw Jim Harbaugh become the first NFL head coach to go to a conference championship game in each of his first three seasons, cracks were beginning to form in his relationship with the 49ers.

Reports of a power struggle between Harbaugh and the 49ers front office began to surface. After a season of comparative failure in 2014, Harbaugh was relieved of his duties as an NFL head coach.

28 years after leaving Ann Arbor as a player, Jim Harbaugh returned to his alma mater as the head coach. The Michigan Wolverines had scraped together 20 wins over three years prior to Harbaugh’s appointment, with a 5-7 record in Brady Hoke’s final season in charge.

He is reportedly liked by players, university staff, and boosters alike. However that isn’t the full story.

How successful has Harbaugh’s tenure at Michigan really been?

For all the wins, for all the pleasantries, Harbaugh can be deemed to have been a failure at Michigan for a number of reasons. Under his leadership, Harbaugh has failed to lead the team to the College Football Championship. The Wolverines have never even won a Big Ten Championship with Harbaugh as head coach.

Perhaps most galling to Michigan fans, the Wolverines have never beaten Ohio State during Harbaugh’s tenure. The rivalry is one of the biggest in all of sports and Michigan’s failure to win under Harbaugh hangs like a black cloud over his tenure. The Buckeyes have also been a thorn in the side of Harbaugh’s recruiting history at Michigan. He has also failed to maximize the potential of the five-star recruits that they have landed during his tenure.

This season has been a disaster for the University of Michigan. Although they had an impressive win over Minnesota to open the season, defeat to rival Michigan State and a heavy loss to Wisconsin amongst others have left the program with a 2-4 record in this shortened Big Ten season. It is the worst record for the Wolverines since 2008.

Teams rumored to be interested in Harbaugh as head coach

Despite Michigan’s abysmal performance this season, rumors are flying about the NFL’s interest in Jim Harbaugh. They began to surface during November, as it became apparent that certain NFL teams would part ways with their existing head coach. When the Detroit Lions parted ways with Matt Patricia, Harbaugh’s name was linked to that vacancy.

However, the rumors reached a crescendo in early December with multiple outlets reporting NFL interest in Harbaugh. Those rumors appeared to be confirmed by Michigan insider John U. Bacon. According to Bacon “at least five NFL teams have expressed an interest in hiring him – per usual – though not clear if any have made firm offers yet.”

Little interest from the NFL for Harbaugh’s services

That appears to be in direct contradiction to what sources close to Pro Football Network understand. In his NFL Rumors & Draft News mailbag back in November, Tony Pauline cast doubt on an NFL future for Harbaugh. On the NFL Draft Insiders podcast this week, Pauline reiterated that understanding saying:

“Realization is starting to set in for Harbaugh. The fact is, there’s little interest for his services in the NFL.”

According to Pauline, it is more likely that Harbaugh remains at Michigan.

“I talked to someone close to the situation and he said what he thinks is going to happen is Harbaugh is going to stay and is going to actually take a pay cut to stay. He doesn’t have a lot of options.”

Oliver Hodgkinson is an NFL draft and NFL analytics contributor for the Pro Football Network. You can follow him on Twitter at @ojhodgkinson.
In this article:head coach news, Head Coach Rumors, Jim Harbaugh, Michigan Wolverines, Stanford Cardinal