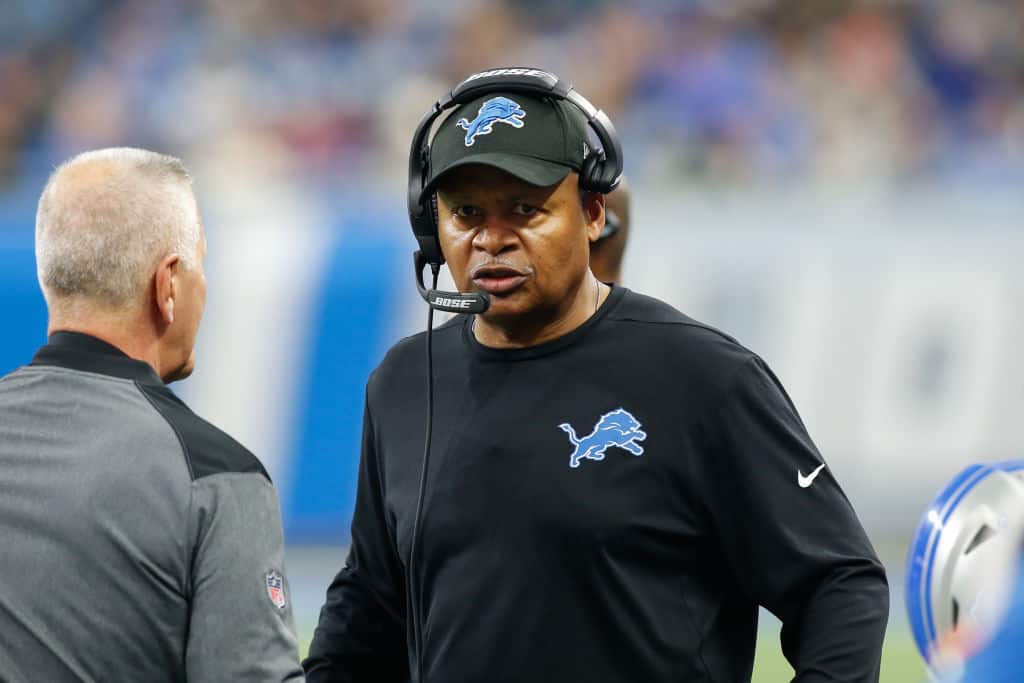 After a few years out of the spotlight, Jim Caldwell is again drawing interest as an NFL head coaching candidate. The veteran made his name with the Indianapolis Colts as one of the offensive coaches for Peyton Manning. Caldwell eventually succeeded the retiring Tony Dungy as the team’s head coach in 2009.

Jim Caldwell solidified his status in the NFL with the Indianapolis Colts as one of the offensive minds behind Peyton Manning’s success. Eventually, he took over after Tony Dungy retired as the team’s head coach in 2009. His debut season saw the team go 14-2 but ended in a loss to the New Orleans Saints in Super Bowl XLIV.

He retained the AFC South and returned to the playoffs the following year. Though, they lost on Wild Card Weekend to the New York Jets. His time in Indianapolis came to an unfortunate conclusion, though. Manning missed the entirety of 2011 to undergo neck surgeries and the team slumped to an embarrassing 2-14 season.

Caldwell was eventually fired with a 26-22 regular season record but wasted no time before joining the Baltimore Ravens as quarterbacks coach in the same offseason. He was promoted to offensive coordinator following an unsavory Week 14 loss. Caldwell played a crucial part in Joe Flacco and the offense’s magical postseason run, culminating in a victory in Super Bowl XLVII.

Jim Caldwell’s last NFL head coaching job was with the Detroit Lions, where he spent four seasons at the helm. In that time, he led the team to three winning seasons and two playoff appearances.

His 36-28 regular-season is the highest winning percentage for any Lions head coach who has spent a season or more with the team since the 1950s. He brought stability to a franchise that has been treading water for much of its existence. Still, his inability to win games in the postseason saw the team look in another direction.

There had always been rumors that general manager Bob Quinn wanted to bring in somebody he was more familiar with from his time. Matt Patricia, the New England Patriots defensive coordinator, quickly replaced him. Patricia’s disastrous 13-29-1 record with the Lions shone a light on Caldwell’s successes.

Caldwell interviewed for other head coaching positions since leaving the Lions at the end of the 2017 season but was unsuccessful. In the end, he spent time with the Miami Dolphins as an assistant head coach and quarterbacks coach. Yet, he’d inevitably step away from Brian Flores’ staff temporarily for health reasons.

Teams rumored to have interest in Jim Caldwell as head coach

Pro Football Network Insider Tony Pauline reported that he expects Jim Caldwell’s name to be in the discussion for several jobs this offseason. Caldwell has already interviewed with the Houston Texans for their vacant head coach position. He will get invitations to interview for other roles before the end of the hiring cycle.

Jim Caldwell’s health concerns appear to be behind him. Speaking back in August to former safety Glover Quin, who he coached in Detroit, he stated, “I’m feeling great, actually. Almost back to fighting weight, but I feel good. I had an issue that popped up that really was something that could be corrected without surgery, and just a matter of getting more rest and watching my diet.”

Ultimately, Pauline doesn’t expect him to be successful. Still, the fact that he’s drawing interest is a testament to the esteem he’s held around the league.