With Gardner Minshew under center, can the Jacksonville Jaguars provide value in their betting odds in the 2020 NFL season?

There really are not that many changes for the Jaguars offensively in 2020. The growth of Minshew will be a crucial element to how they perform. Eifert is immediately the most talented tight end on the roster and could be an interesting red-zone weapon. Similarly, the arrival of Thompson could mean we see Fournette off the field a little more in 2020, having played 83% of the snaps in 2019.

The Jaguars did not invest much draft capital in their offense, but they did add a potential X-factor in Laviska Shenault out of Colorado. Shenault can be a weapon in both the pass and run game, logging 149 receptions and 42 carries during his time at Colorado. He struggled in his Junior season, seeing a drop off in receptions, yards, and touchdowns. However, he is supremely talented and could be a high-impact contributor in 2020. 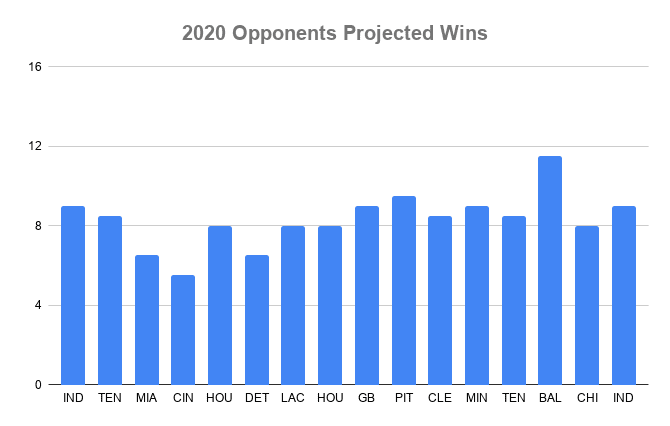 The Jaguars have one of the most middle-of-the-road schedules of the 2020 season, with 14 of their 16 opponents projected to win between 6.5 and 9.5 games. What that means is that while the schedule is not overly difficult, it is certainly not easy either. Their easiest game of the season is projected to come in Week 4 when they face the Cincinnati Bengals, while their toughest is expected to be Week 15 on the road against the Baltimore Ravens.

They do have a reasonably easy start, with three of those first six games coming against teams projected to win 6.5 games or less in the 2020 season. However, what that means is that if they do not capitalize early, then this season could look awfully messy, real quick. Not one of their final 10 opponents are projected to win less than eight games, which means there will be no let-up in the second half.

This schedule for the Jaguars does not get any more comfortable when you start breaking it down in more detail. They do only have to play one prime time game in 2020, which comes in Week 3 when they host the Miami Dolphins. Playing regularly on a Sunday can be an advantage as it avoids short weeks and the complications that come from being on Thursday or Monday Night Football regularly.

However, outside of primetime games, there are several disadvantages on the schedule for the Jaguars. Firstly, the Jaguars were supposed to play back-to-back home games in London in 2020. That second game would have been a massive advantage for the Jaguars, but with the cancellation of the International Series in 2020, that advantage has been lost.

Additionally, the Jaguars are at a disadvantage in both of their games against the Houston Texans. In the first game, it will be the second of back-to-back road games, following the game in Cincinnati in Week 4. In the Week 9 matchup, they will catch the Texans coming off their Week 8 bye, while the Jaguars will have spent the previous weekend playing on the West Coast.

2020 is going to be a really tough year for the Jaguars. They play in an extremely tough division, with a schedule that never lets up throughout the 17 weeks and with multiple points of disadvantage. They are going to need Minshew to take the next step as a quarterback if they are to remain in the playoff race into the second half of the season.

So much of their season will depend on how they perform in that opening six games, where the three weakest projected opponents on the schedule can be found. If they come out of that with three wins, then they have a shot of hitting the over. However, coming out of that stretch with just one or two wins could mean we see the Jaguars struggling to get close to five wins, which is the total projected by my colleague Cole Thompson.

Given that the Jaguars lack sure-fire contributors at key positions, there is a lot to be pessimistic about entering 2020. First-round pick Henderson could be thrown into the starting lineup quickly on the outside, and the team will likely be looking at their pass rush to help out a mediocre secondary.

That pass rush could be superb if Allen and Ngakoue are together, but rumors swirling that Ngakoue will not play on the franchise tag, or could be traded, then they may not have that pass rush to lean on. If the pass rush cannot consistently harass opposing quarterbacks, then this defense could find themselves vulnerable to being passed on plenty in 2020, putting a lot of pressure on their second-year quarterback.

The play of Minshew is going to be the crux of whether this team gets close to hitting the over or not. If Minshew struggles, then 5.5 wins looks exceptionally high. However, if he takes the next step in certain areas, then we could be looking at a team capable of getting closer to a .500 record.

However, even if Minshew does take those steps, six wins with their schedule and a team devoid of talent in multiple areas will be tough. Therefore, this looks like a prime opportunity to take the under on the Jaguars projected win total.