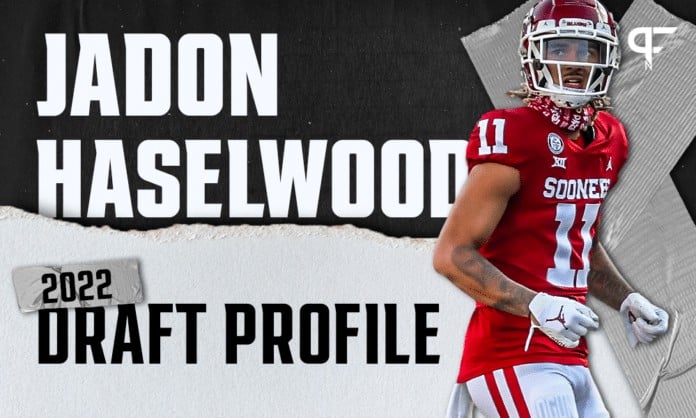 Jadon Haselwood has battled obstacles in his college career, but does his scouting report reveal NFL Draft potential for the Oklahoma WR?

Although Ohio State arguably has the two best receivers in the class, the Oklahoma Sooners have a roster stacked with pass-catching prowess as well. Can Jadon Haselwood emerge as not only the No. 1 target for Spencer Rattler but as a genuine NFL Draft prospect? The Oklahoma WR arrived in Norman with a considerable reputation, but what does Haselwood’s scouting report tell us about his NFL potential?

Although 2021 was a down year for the program, Oklahoma has produced first-round receivers in two of the last three years. While CeeDee Lamb and Marquise Brown are the standard-bearers, there have also been multiple mid-round picks at the position in recent years. Can Haselwood join them in the 2022 NFL Draft?

Let’s start his scouting report with the most instantly alluring aspect — size.

At 6’3″ and 202 pounds, Haselwood fits the aesthetic of the modern-day contested-catch receiver. He possesses a big, physical frame, and you better believe he’s not afraid to use it. We’ll come to how he uses that as a pass catcher shortly, but that physicality comes with additional benefits.

There are repeated examples on tape where Haselwood is active as a blocker. This comes both in the ground and passing games. While Haselwood plays with physicality in the ground game (helping open running lanes downfield), he also mixes it up when he’s not the target as a receiver. One notable example comes from the 2019 Texas Tech game where he chip blocks a defender, enabling his teammate to gain more yards after the catch.

Physicality as a pass catcher

Nevertheless, as a WR prospect in the NFL Draft, this scouting report needs to tell you what Haselwood offers as a pass catcher. Well, contested catches aren’t really that with the Oklahoma WR: 50/50 balls are more like 80/20 when Haselwood is involved.

Of course, his size and physicality are a component of this. However, Haselwood possesses solid hands, impressive catch radius, and excellent technique. In games studied, he plucked the ball out of the air on the boundary and hauled it into his body multiple times.

Furthermore, his physicality should mean he won’t have any issues overcoming press coverage in the NFL. Haselwood also showcases excellent footwork in his releases, allowing him to set up his defender to fail.

Although Haselwood has impressive elements in his scouting report, there are areas for improvement. There’s a reason why the Oklahoma WR isn’t often listed among the upper echelons of 2022 NFL Draft pass catchers.

There will, of course, be a red flag from an injury perspective. A torn ACL is a severe injury to overcome. While players do recover and play to an elite level, there is always the chance of reoccurrence. Playing an injury-free season in 2021 will help alleviate those concerns.

Haselwood lacks elite long speed. The Oklahoma WR ran a 4.57 40-yard dash in high school. While that’s by no means sluggish, he’s not going to be a speed threat in the NFL. He won’t create separation downfield by outrunning a defensive back.

This season, Haselwood could elevate his stock with consistency in his route running. There are some examples of crisp, exceptional routes on his tape. However, there are others where he rounds off at the top of the route. Consistency will be key this season.

There have been lofty NFL Draft expectations heaped on Haselwood’s shoulders from a young age. A physical freak and sensational standout at Cedar Grove High School, an early scouting report provides a glimpse at an exceptional talent.

In a scouting report on his 247 Sports recruiting page, Haselwood is described as having first-round NFL Draft potential. Comparisons are the bread and butter of analysis in the modern era, but being likened to Keenan Allen is not something to take lightly. Yet, with the physical frame and elite ball skills demonstrated for Cedar Grove, it’s not hard to see the comparison.

Although his 744 receiving yards and 15 touchdowns between his freshman and junior season may seem relatively meager, Haselwood was the standout pass catcher in a predominantly run-based offense. The talent was there to see, and as a result, he was a five-star recruit. Furthermore, he was the top-ranked WR in the nation and the fourth-best player in the country.

Naturally, Haselwood commanded the attention of all the major college programs. An Ellenwood native, he committed to Georgia early in 2017, shutting down his recruitment. However, he rescinded his commitment to the Bulldogs during a senior season where he racked up 1,032 yards and 11 touchdowns and earned first-team All-American honors from MaxPreps.

Despite this, Georgia remained in his final four ahead of a reveal during the All-American Game. With a table of caps bearing Georgia, Oklahoma, Tennessee, and Florida State logos, Haselwood announced his college destination on live TV. He was headed to Norman.

“Sometimes, you got to step out of your comfort zone,” he beamed.

With his physical presence and elite pass-catching skills, Haselwood was primed for an immediate impact at Oklahoma. While some newcomers take time to adjust to college football, the Oklahoma WR was ready to go.

In his debut in the season opener against Houston, Haselwood snagged 2 receptions for 46 yards. During the second game of the season, the Oklahoma WR secured his first touchdown. Furthermore, he torched South Dakota for 78 yards on just 3 receptions. Against Texas Tech, Haselwood logged a career-high 6 receptions while adding 59 yards to his résumé.

Despite his early career success, Haselwood tallied just 19 receptions, 272 yards, and 1 touchdown in his freshman season. However, with Lamb headed to the NFL Draft, there was a sense of expectation and excitement for Haselwood’s role in the Oklahoma WR room ahead of his sophomore season in 2020.

The path to the NFL Draft doesn’t always run smooth, and for Haselwood, disaster struck in spring 2020. In what was described as a “freak accident” while at home, the Oklahoma WR tore his ACL. Even at that early point in the year, the expectation was that Haselwood would lose his entire sophomore season to the injury.

While overcoming adversity, is the best yet to come?

Seven months later, Haselwood was back with his teammates and ready to play against Kansas. The Oklahoma WR snagged a 33-yard reception in his return to the field before reflecting on the time spent away from it.

“Those times were tough, but being there for my team, that just makes up for time lost. Being back is a great thing.”

However, it wasn’t all sunshine and rainbows for Haselwood. He’d miss the next game against Oklahoma State and played in just two more games for the rest of the year. The Oklahoma WR was absent for the Cotton Bowl win over Florida, citing personal reasons.

Once considered the best receiver in the nation, Haselwood began his third season at Oklahoma with just 337 yards and 1 touchdown on his résumé. While marred by injury and obstacles, his career to date hasn’t lived up to his potential. Yet.

“I mean, we see the critics and the statistics but a lot of stuff we can’t control,” the Oklahoma WR told the media in the spring. “I’m sure the world’s going to see what this unit can do.”