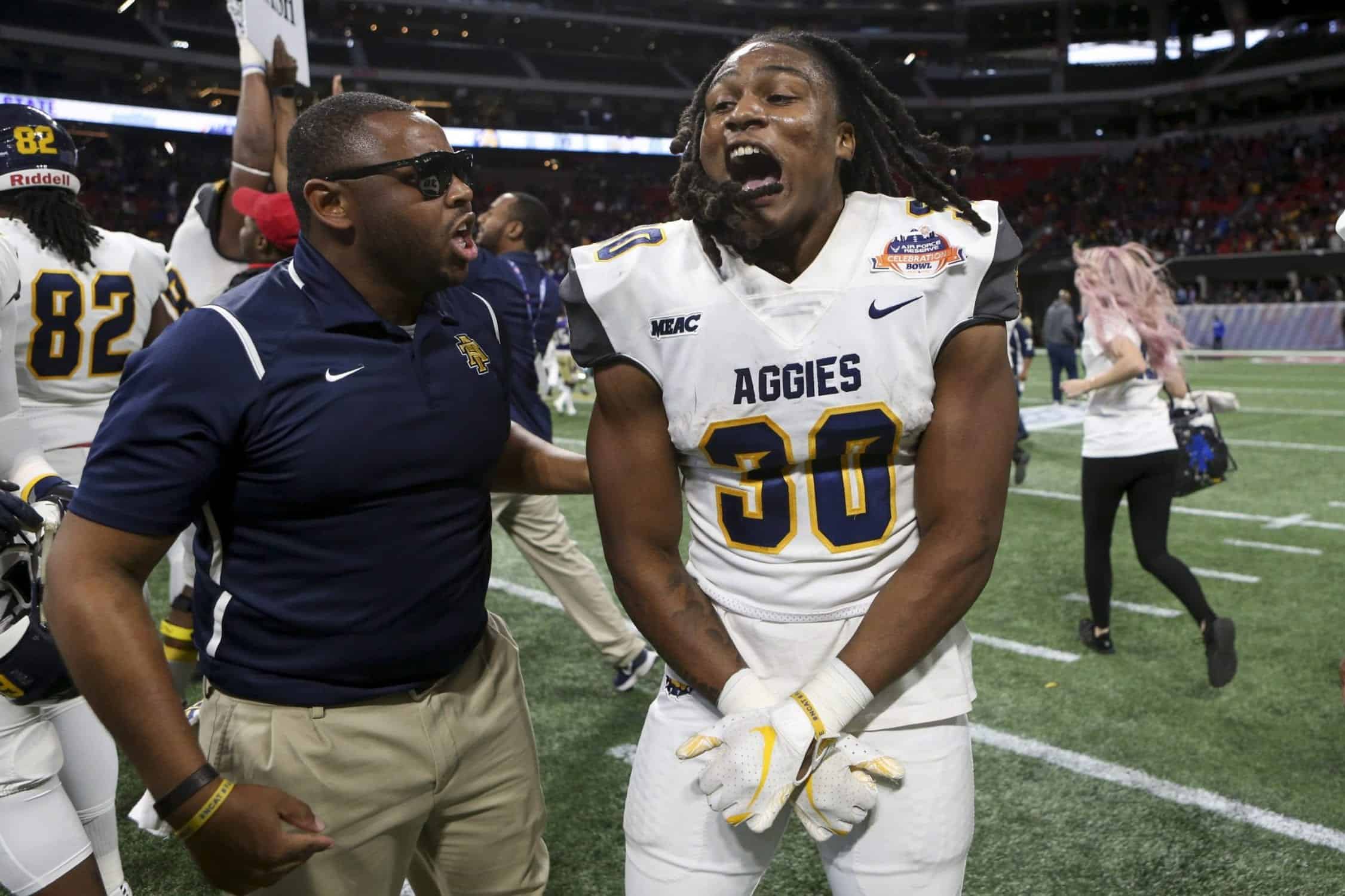 Photo Credit: SI.com
What's in this article? Click to show
Story of struggle and redemption early on
Martin is a legitimate draft prospect
NFL comparison and draft positioning

The College Bowl season has started, and FCS and Division I players alike are making names for themselves as they look toward the NFL Draft. One of those talented NFL Draft prospects is North Carolina A&T running back Jah-Maine Martin.

Update: Shortly after we published this story, Martin announced on Twitter that he is returning to school for his senior season. He’ll have another year to turn heads and continue to improve his skillset as he looks ahead to the 2021 NFL Draft.

The well-traveled redshirt junior back has been tremendous this year in the Mid-Eastern Athletic Conference and became an FCS All-American with his standout season. The big-play man is coming off a bowl victory against Alcorn State in which he ran for 110 yards and two touchdowns. He will now set his sights on the NFL and hope to hear his name called in the latter portion of the selection process.

Below, I will take a look at Martin’s journey to reach this level of dominance for North Carolina A&T and what makes him such an intriguing NFL Draft prospect. The NFL has seen multiple Aggies drafted in recent years, such as Tarik Cohen, and Martin should be the next. PFN’s Bill Riccette mentioned Martin as a potential late rounder during this past Saturday’s Live Blog. He may not be Cohen, but Martin is a fascinating player in his own right.

Story of struggle and redemption early on

Martin starred at Conway High School in South Carolina before signing to play college football with Coastal Carolina. The talented tailback rushed for over 1,000 yards in back to back seasons to close out his high school career and was selected to play in the South Carolina North-South All-Star Game. Once Martin reached the college level, his talent was undeniable. He only played in three games but rushed for over 175 yards on 27 carries for the Chanticleers.

However, Martin faced some legal issues, and the school suspended him from the football team following the 2017 season. He received a call from North Carolina A&T coaches and decided the Aggies were the best fit for him moving forward. During his first season with the Aggies, Martin formed a lethal one-two combo with former starter Marquell Cartwright. Despite only starting two games, Martin managed to rush for 656 yards and seven touchdowns on 98 carries in his sophomore season

Martin is a legitimate draft prospect

Despite the early success at North Carolina A&T, the best was yet to come for the star running back. Martin has been an absolute star and revelation for the Aggie football team and turned himself into a legitimate NFL Draft prospect. He has amassed 1,246 yards rushing on 151 carries with 20 scores. His 8.3 yards-per-carry average leads the entire FCS, and he’s shown some high-end speed with long runs of 84 yards and 75 yards this year. Take a look at an example of that burst on this second-half touchdown run against Alcorn State in the Celebration Bowl this past weekend.

Jah-Maine Martin with the 75 yard TD to start the 2nd half 🏈🏃🏽. Aggies now lead Alcorn State 31-10 with 14:47 remaining in the 3rd quarter!#CelebrationBowl #NCAT pic.twitter.com/nkeSBFiMF0

Martin has a compact-build at 5’11” and 214 pounds, but he has the home run speed to break away on long runs. He compiled over ten runs of 55 yards or more in 2019. The explosion is on display on this run against South Carolina State earlier this season.

Martin started his high school career as a defensive lineman before being moved to running back. The coaches did so to take advantage of his speed, and the move has certainly paid dividends for Martin’s career prospects. The defensive background shows in Martin’s aggressive and powerful nature as a runner. He hits the holes hard and never shies away from contact at the point of attack.

One player I like to equate Martin with is Tennessee Titans starter, Derrick Henry. Although the size of the two runners is very different, both are violent runners who run upright and have deceptive long speed to finish runs consistently with significant gains. Aside from the dip in competition, one other weakness of Martin’s game is his lack of receptions at North Carolina A&T. The ability to catch the ball out of the backfield is crucial in today’s NFL, and Martin has not displayed that during his time as an Aggie.

This lack of evidence as a pass-catcher could hinder Martin’s ability to stay on the field at the next level and could negatively affect his draft stock. If he can showcase decent hands at the Combine and his Pro Day, he will stand a much better chance at being drafted. Two teams that could show interest are the Buffalo Bills and Chicago Bears. Buffalo drafted Martin’s former teammate, defensive end Darryl Johnson Jr. in the 2019 NFL Draft, and Frank Gore is entering the twilight of his career. The team could use some fresh legs to complement last year’s draft pick, Devin Singletary.

There’s an obvious connection with Chicago because of current Bears’ star and former Aggie great, Tarik Cohen. The aptly dubbed “human joystick,” Cohen has made some big plays for the Bears during his tenure, and that could influence their decision with Martin. While Martin may not share the same video game-like agility and receiving proficiency, he would add another weapon in the return game and complement both Cohen and starter David Montgomery.

Had he entered the draft, Martin would have had a chance to be drafted as early as the fifth round in April when the 2020 NFL Draft rolls around. But with him returning to school, he’ll look to improve that position in 2021.

Scott Gorman is a writer for PFN covering the NFL Draft. Find him on Twitter: @sgormanPFN.