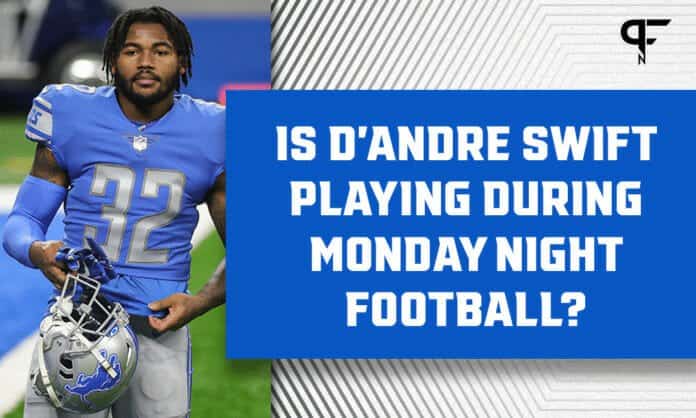 Will D'Andre Swift be active for Monday Night Football? This fantasy injury report discusses that and more for Lions vs. Packers.

Fantasy football managers who had Detroit Lions running back D’Andre Swift on their bench last week watched in horror as the 22-year-old had a stellar afternoon against the 49ers. He finished with 19 touches for 104 total yards and a touchdown. Many NFL insiders reported Swift would have a limited role after a preseason derailed by a groin issue. How should you approach him heading into Monday Night Football? Let’s take a look at Swift’s fantasy injury report.

The short answer is yes. However, you may have trepidation after new Lions head coach Dan Campbell’s Week 1 shenanigans regarding Swift’s status. It was surprising to see him listed as questionable heading into tonight’s game. Swift practiced all week and even had a full session on Saturday, so it would be a shock if he were suddenly inactive.

Swift is on the RB2 radar against the Packers tonight. Green Bay is an 11.5 point favorite over Detriot, and the over/under on this matchup is 48.5. The Packers will want to bounce back after losing to the Saints in the biggest upset of Week 1. Swift should see plenty of targets from quarterback Jared Goff, who has a history of leaning heavily on his running backs as receivers out of the backfield. Swift averaged 4.4 targets per game last season.

If you still have heartburn over Swift’s availability, you could always use him in your flex spot. This would provide you flexibility (no pun intended) if he’s suddenly inactive. If Swift is out, you would have several viable options to replace him.

The Lions will likely rely on Goff and the passing game in the second half. As a reminder, wide receiver Tyrell Williams has already been ruled out. Receivers Amon-Ra St. Brown, Trinity Benson, and Quintez Cephus are intriguing options if you find yourself in a bind at the flex position.

Two other Lions starters, outside linebacker Trey Flowers and defensive end Michael Brockers, are also listed as questionable. Former Packers running back Jamaal Williams is on track to participate in his revenge game. He was limited on Thursday and Friday. Yet, he was a full participant on Saturday and was removed from the injury report.

Packers left guard Lucas Patrick returned to practice on Saturday after being concussed on the final offensive snap of last week’s game against the Saints. He is questionable for tonight’s game. Safety Darnell Savage is also questionable, while tight end Josiah Deguara (concussion) is doubtful.

Lions running backs coach Duce Staley has publicly stated that he does not have any long-term concern over Swift’s groin injury. The second-year back will be in a position to thrive against the Packers tonight. Green Bay’s defense has allowed an average of 21 touches, 87 total yards, and 16 PPR fantasy points per game to opposing RBs over in their last five regular-season games.