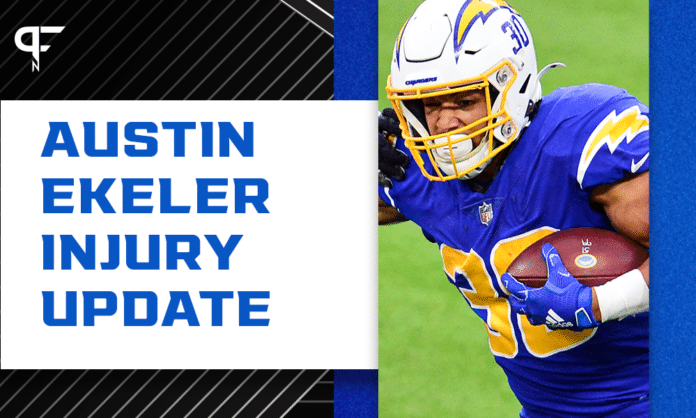 Is Austin Ekeler playing this week? Hamstring injury returns ahead of Week 1

Is Austin Ekeler playing in Week 1 following his hamstring injury? The fifth-year RB will be crucial against the vaunted Washington defense.

By Dalton Miller
September 12, 2021
What's in this article? Click to show
Will Austin Ekeler’s injury keep him out of Week 1?
Injury history
Ekeler’s fantasy value if he plays vs. WFT

The Los Angeles Chargers are tired of seeing Austin Ekeler on the injury report, but unfortunately, he’s back at it again in 2021. Now, we could get deep into the weeds of the Chargers’ curse, but it’s not that serious yet. Hopefully, this is the year the Bolts can finally keep their star players healthy because they have a lot of talent on the roster. Will Ekeler play this week, and what is his fantasy football outlook for Week 1 if he does?

Will Austin Ekeler’s injury keep him out of Week 1?

Ekeler was back at practice on Friday in a limited capacity after missing the team’s previous two practices. He suffered a hamstring strain in 2020, and we’re back in that same arena to begin 2021. However, he won’t have to land on injured reserve this time.

Head coach Brandon Staley said Ekeler looked good on Friday, and they’re optimistic for Sunday against the vaunted Washington Football Team defense. However, hamstrings are an incredibly touchy injury to deal with. Returning too soon could re-aggravate a soft-tissue injury like that.

Ekeler enters his fifth NFL season with the Chargers, and all but 2019 proved how difficult the running back position can be on the body.

In 2017, Ekeler broke his hand during a loss to the Chiefs. He didn’t miss any games, but he had to play the rest of the season in a cast. Still, Ekeler rushed for 5.5 yards per carry as a rookie and caught 27 passes.

In August of the next season, Ekeler suffered a calf strain but returned in time for the regular season. He’d play 14 games before the injury bug crept back into frame. During a Dec. 9 game against the Bengals, Ekeler suffered a neck stinger and a concussion. He missed the final two contests.

After remaining healthy and catching a million passes in 2019, 2020 again proved difficult for the Chargers running back. Ekeler missed six games in the middle of last season with a hamstring strain that landed him on IR. Then, in the team’s season finale against the Chiefs, Ekeler suffered another concussion.

Concussions are like potato chips. Once you eat one, it’s tough to avoid eating more.

Ekeler’s fantasy value if he plays vs. WFT

Death. Taxes. Wondering if Austin Ekeler is playing this week. Something in life are inevitable. Ekeler gave fantasy managers heart palpitations after reports surfaced he was dealing with a hamstring injury that popped up this week. After back-to-back DNPs on Wednesday and Thursday, Ekeler turned the corner on Friday [September 10] and was a limited participant.

He is officially listed as questionable for the Chargers’ Week 1 game against the Washington Football Team. Head coach Brandon Staley said on Friday that Ekeler “looked good out there.”

Thats a massive sigh of releif as Ekeler is one of the permier RBs in fanatsy. After an RB4 finish in 2019, Ekeler averaged 18.1 opportunities and 16.5 points per game (including Week 4 when he suffered his hamstring injury). Even missing six games, Ekeler commanded 65 targets, eighth-most among all RBs, catching 54 for 403 yards. Add in the addition of OC Joe Lombardi, formerly of the Saints, and Ekeler could be primed for an Alvin Kamara-type role.

I am tempering expectations in Week 1 due to his hamstring and facing a Washington defense that ranked No. 3 in fantasy points allowed to RBs at just 18.7 per game and likely got even better. You’re still starting Ekeler, but he is a lower-end RB2 rather than an RB1 for Week 1.