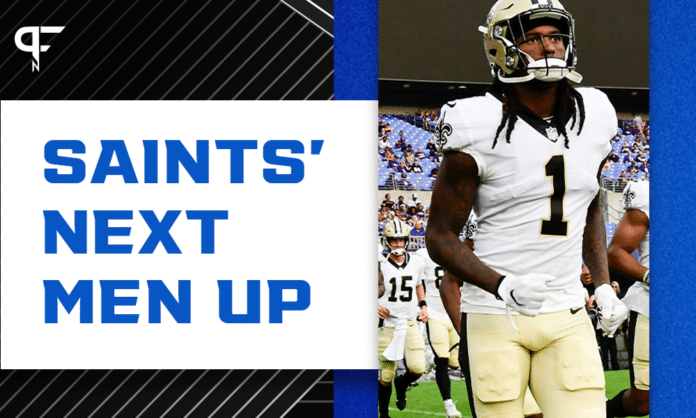 What will the Saints' passing offense look like without Michael Thomas at the start of 2021? Marquez Callaway and others need to step up.

By Adam H. Beasley
September 2, 2021
What's in this article? Click to show
How will the Saints’ offense manage without Michael Thomas?
Marquez Callaway coming up big in Thomas and Smith’s absence
Any sleepers hiding within the Saints’ offense?

The New Orleans Saints offense has far bigger concerns right now than who will get Michael Thomas’ targets over the next five games. Their more pressing concern is when they will be back home. Hurricane Ida has ravaged the Gulf Coast, and elected officials are begging people to stay away if they can. The Saints, who for now will play in Jacksonville and practice at TCU, can indeed stay away. But it’s about as far from an ideal situation as an organization can start a season.

How will the Saints’ offense manage without Michael Thomas?

This is a football team determined to win games. And without Thomas — the three-time Pro Bowler who begins the season on the Physically Unable to Perform (PUP) list with a significant ankle injury –, that isn’t an easy task.

So what’s Plan B? Where will his targets go?

The answer would have been a lot easier if there was clarity on Tre’Quan Smith’s mysterious injury, but he hasn’t been a regular participant in practice in weeks. The sense among beat writers seems to be that his issue isn’t significant, but even if he plays Week 1, he’ll likely be a bit rusty.

And whenever he does return, it probably won’t change the Saints’ pecking order much. An ascendant Marquez Callaway has become QB1 Jameis Winston’s preferred target.

Marquez Callaway coming up big in Thomas and Smith’s absence

Callaway looks to be an absolute steal for the Saints, who grabbed the former Tennessee wideout as an undrafted free agent in 2020.

He got his feet wet with 21 catches for 213 yards in 11 appearances as a rookie, but nothing he did then could have prepared anyone for his emergence this summer.

Callaway caught 8 passes for 165 yards and 2 touchdowns in the preseason. The vast majority of that production came during the Saints’ MNF game against the Jaguars. If the Saints were hoping to keep Callaway’s improvement a secret, his nationally televised showcase spoiled those plans.

“Usually, when you see something show up in a game, you’ve probably seen it in practice,” Payton said. “We’ve seen Marquez [Callaway]. I saw that [growth] a year ago, but we’ve seen his growth right in front of our eyes.”

“That game, though, is usually what’s needed for that confidence,” Payton added. “Some guys in practice can excel but sometimes they have a hard time going across the street and performing in the stadium. He doesn’t have a hard time doing that. You want to see that constant growth for a lot of different players.”

Any sleepers hiding within the Saints’ offense?

Even Callaway, a healthy Smith, and a peak Alvin Kamara probably won’t be enough for a functional passing game. That’s why the Saints could use a big Year 3 from Lil’Jordan Humphrey, another undrafted wide receiver with obvious physical gifts.

We hear the Saints see real upside in Humphrey due to his size (6’4″, 225) and smarts. That showed up in the preseason when he averaged 14.7 yards per catch and had 2 touchdown receptions.

It’s a gamble, of course, to put so much hope in a group of receivers with such a slim track record. But the Saints are making do with what they can, both on the field and off, for the time being.