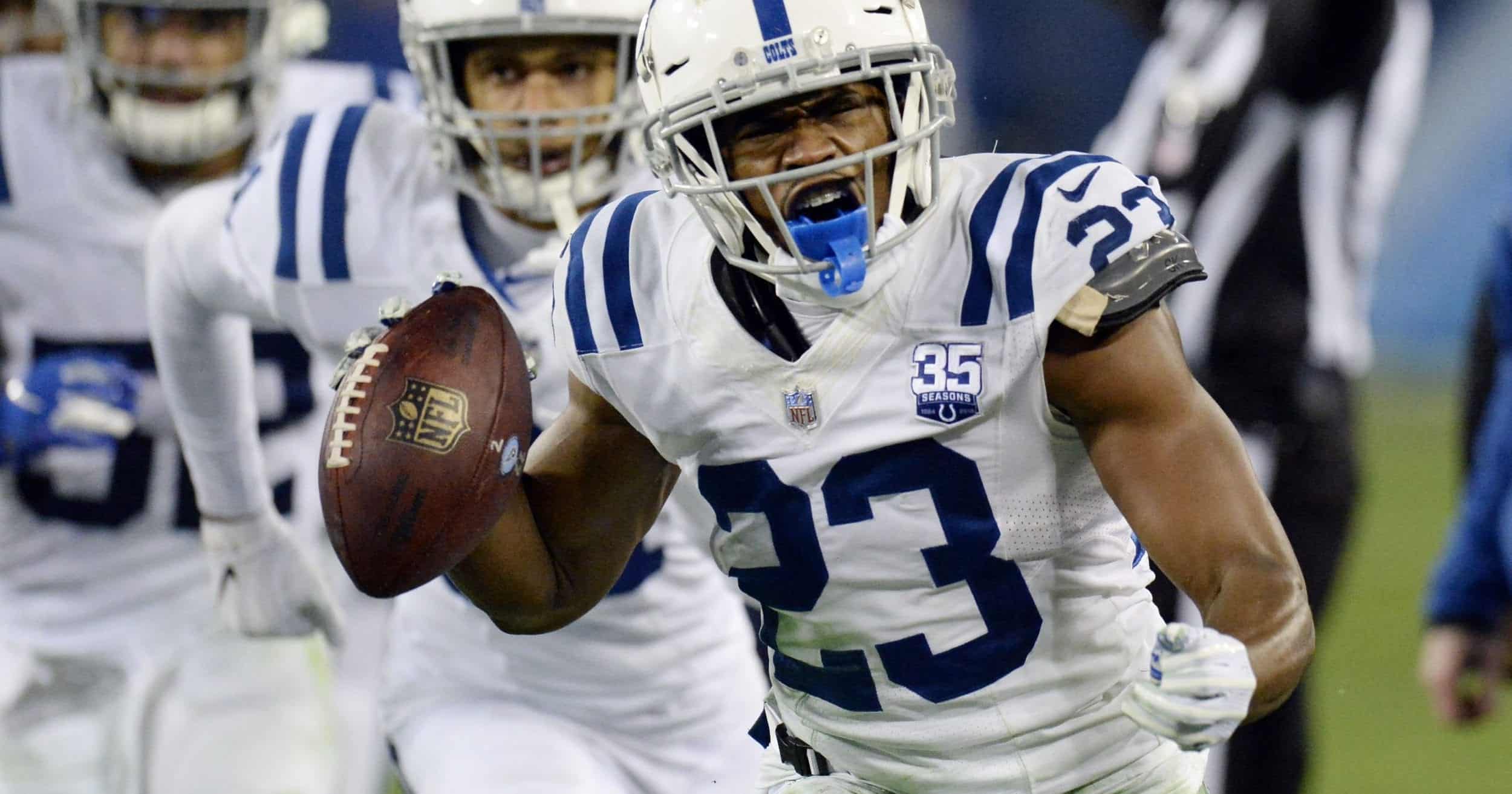 The Indianapolis Colts raised eyebrows last week when they made Kenny Moore the highest paid slot corner in the National Football League with a four-year, $36 million contract extension. After all, the former undrafted free agent out of Valdosta State was only 23-years-old. His breakout sophomore campaign garnered plenty of attention, but he was hardly a household name. It’s not often a player goes from undrafted to the highest paid player at his position so quickly. So, how did Kenny Moore go from camp casualty to core player in two short years? What makes him so valuable to the Colts?

NFL players typically begin their organized football careers at a very young age. Especially when they hail from legendary football hotbeds like Valdosta, Georgia. Valdosta is the type of town so steeped in football culture parents and coaches start projecting kids’ future positions on the gridiron the moment they can walk. It’s the kind of place where football is life. It’s everything. All-consuming. It’s the only thing anyone is talking about from one Friday night to the next. Whether you’re at church, the grocery store, or the dinner table you are likely discussing Valdosta football.

In this regard, Kenny Moore’s football career was atypical from the beginning. While his peers were fastening chin straps, Moore was competing in soccer, basketball, and track at Lowndes High School. In fact, he even worked the concession stand during his high school’s football games before ever stepping onto the field:

“My basketball coach ran the visitor side concession stands at Lowndes games,” Moore said. “He was asking if anybody was free to help him. I was the one that said yeah, I could do it.”

It wasn’t until a track teammate convinced him to join the football team his senior season that his football career began. 18 tackles, 2 interceptions, 2 pass breakups, and a trip to the Georgia 6A state playoffs later, Moore was offered a scholarship to Valdosta State.

Football or the Air Force?

Kenny Moore started his college career still unsure if football was the right path for him:

“My mind has been a lot of places,” Moore recalled. “I didn’t expect to play. I was actually about to go to the Air Force my second semester of college if I did not play my freshman year. It was all God. It’s just the path he wanted me to take.”

Luckily for Colts fans, the Valdosta native appeared in 10 games as a freshman including one start (18 tackles, 1 interception). He also starred on special teams with 7 tackles (more on that later). It was this crucial experience that convinced Moore to stick with football:

“Starting out I didn’t have the intentions of playing,” Moore said. “I ended up starting a game freshman year, and I’m thankful for that. It was really the guys who came before me who taught me how to be a college athlete.”

Thankfully, Moore would commit to football and go on to have a very successful four-year collegiate career. His 65-tackle, five-interception performance garnered him a spot on the 2016 Division II First Team All-American team his senior season. This following a second-team finish the season before. His 11 career interceptions rank fifth all-time in Valdosta State history.

Starting back at the bottom

On the heels of a standout Tropical Bowl (FBS Division I college all-star game) performance, Moore posted a 4.47 forty-time, 40.5″ vertical, 6.86 three-cone at Valdosta State’s Pro Day. But, despite his production, a strong showing on the all-star circuit, and impressive testing, Moore went undrafted (not unlike Penny Hart). The Division II All-American would ultimately sign with the New England Patriots. A team with a proven knack for finding good undrafted cornerbacks.

Much as he has at previous levels, Moore made his presence felt immediately. His natural ball awareness was on display once again. The now rookie tallied 4 pass breakups and 2 interceptions over the first 3 days of competitive drills. Even Bill Belichick couldn’t help but take notice:

“He had a good spring,” Belichick said. “Kenny was a good, solid player in college. We’ll see how it goes. He may have some versatility to play inside and outside.”

However, as is often the case with undrafted rookie standouts, Moore became a numbers casualty on final cut day. A decision by Belichick and the Patriots that’s likely to keep Indianapolis Colts fans grateful for the foreseeable future. General manager Chris Ballard would claim him immediately inheriting his three-year, $1.66 million contract the following day.

Moore’s ascension with the Indianapolis Colts

Kenny Moore’s Indianapolis Colts career would have a familiar beginning. Just as in college (and New England), he would stand out on special teams first. While used sparingly defensively early on, he was on every unit in the kicking game totaling 285 snaps, per PFF (subscription required). He would even see four starts at outside cornerback down the stretch as injuries mounted and playoff hopes disappeared. All told registering 30 tackles, 5 pass break-ups, and an interception over 384 snaps. A more than solid offering from an undrafted free agent from Division II.

Then came 2018 and the hiring of head coach Frank Reich and, subsequently, defensive coordinator Matt Eberflus. Eberflus would go on to install the most zone-heavy, double-high safety scheme in the NFL. A change that would weaponize Moore’s strongest traits: agility, physicality, and ball skills.

The second-year upstart would break camp as the starting slot corner. And that’s just the tip of the iceberg. Not only did he see 590 snaps in the slot, but also 230 outside, 55 in the box, and even 32 as a down lineman. The latter likely in exotic sub packages. All while maintaining kickoff, punt return, and field goal block duties. For those counting that’s 1,063 defensive snaps and another 148 on special teams (PFF). To say Kenny Moore was heavily utilized by the Colts would be an egregious understatement. He did everything short of reprising his role as concession stand attendant.

Moore’s impact on the Indianapolis Colts

It’s easy to see why the Colts could value such a versatile player so highly. However, for all of his duties, where he truly makes his greatest impact is in the slot. A position that is quickly becoming among the most valued in football. A major benefit to the Colts Tampa-2 base defense is the freedom it gives its second level defenders to make plays. With a two-man safety net in place, they are able to read what’s in front of them and attack the ball aggressively. In other words, an absolutely perfect fit for Moore’s skill set.

Playing on his toes with eyes in the backfield is where Moore truly shines (as did Darius Leonard). The Colts playmaker filled the box score with 81 tackles, 5 sacks, 6 pass break-ups, and 4 interceptions. His 41 stops (playoffs included) led all NFL corners. As did his 70 pass rush snaps, 13 (tied) pressures, and 2 batted passes. In short, Moore was among the most productive corners, and players, in all of football. Reich lauded Moore’s multifaceted impact:

“Kenny is the consummate pro,” Reich said. “It’s not only a high level of play, it’s the consistency of play that I really think he embodies. We saw his play-making ability last year on the ball, sack, blitzer, but just really the way he brings that energy every day out at practice. And in the community, he’s a leader.”

Where does Moore go from here with the Indianapolis Colts?

Indianapolis Colts general manager made a decisive move in locking up Kenny Moore with two-years of team control remaining. I have no doubt part of the calculation is the rapidly increasing market for versatile slot corners. It’s also an encouraging message the rest of the locker room both present and future. A sentiment Ballard recently echoed:

“Just look at the roster and look at the contracts that are going to be coming up over the next two to three-year period,” Ballard points out. “Eventually what you would like to happen is you are paying your own guys. You are rewarding the guys in the locker room who have done the right things for you.”

Another aspect is locking Moore in before he turns 24. Ballard sees a player entering his physical prime with only seven seasons of football experience. Which is perhaps the most truly remarkable aspect of Moore’s career trajectory. The team is banking on this extension looking like a bargain two years from now as Moore continues to develop. A bet I’d make with confidence.

In this article:Featured, featured, Kenny Moore