OSM Back to the Future: Panthers TE Ian Thomas’ top-ranked performance from 2018

Ian Thomas has yet to deliver on his potential for the Carolina Panthers, but his top-ranked performance by OSM from 2018 showed what he is capable of.

By Nicholas McGee
June 26, 2020
Jump around this article Click to show
Ian Thomas reliable but results unspectacular
A third-year leap?

Ian Thomas has yet to deliver on his potential for the Carolina Panthers but has produced flashes that he can become a crucial contributor for their offense, with one such display coming in his top-ranked performance by Offensive Share Metric (OSM) in 2018. Through two seasons with the Panthers, Thomas has just 52 receptions for 469 yards and three touchdowns. He has not nailed down the starting role in that time, making only nine starts since being selected in the fourth round two years ago.

Yet in his rookie season, he received the top single-game OSM grade by a tight end for his efforts in the 24-17 defeat to the Tampa Bay Buccaneers in Week 13.

He earned that grade despite failing to light up the stat sheet or excel in any advanced metric, making his high score an extremely curious one. In the latest in our OSM Back to the Future series, we examine how a mediocre performance on the surface saw him finish top of the tight end leaderboard.

OSM uses the NFL’s NextGen Stats and a series of algorithms to assess a player’s contribution to his offense’s production by looking at the factors only he could control.

Thomas’ performance against the Buccaneers garnered a grade of 59.94, indicating an elite level of performance. He was perfect catching the football, hauling in all five of his targets. However, he finished the game with just 46 yards and did little with the ball in his hands after the catch.

Indeed, Thomas averaged just four yards after catch per reception, per NextGen Stats. His expected YAC per reception was 5.5 yards. Thomas’ average separation from the nearest defender was only 7.1 yards despite him being given an average of 9.3 yards of cushion.

So how did he end up with the top individual game grade by a tight end for the 2018 season? The tape does indeed prove that there was more to his display than initially meets the eye.

Thomas’ first significant gain of the game came in the third quarter on a drive that ended in a Devin Funchess touchdown to cut the Buccaneers’ lead to 24-17.

That score may not have happened if not for a smart play by Thomas, who stayed alive to give Cam Newton a target as he rolled to his left to escape pressure. Thomas made the catch on the sideline for an 11-yard gain to bring up a new set of downs on a play that had appeared destined for a sack.

His most impressive play of the game came with under four minutes remaining in the fourth quarter, Thomas producing the type of athletic reception that, as his pre-draft testing indicated, has always been in his locker.

Thomas has impressed since the draft

Thomas earned a Relative Athletic Score (RAS) of 9.29 for his efforts at the 2018 Scouting Combine. RAS is a composite metric on a 0 to 10 scale based on the average of all the percentile for each of the metrics the player completed during his workout. 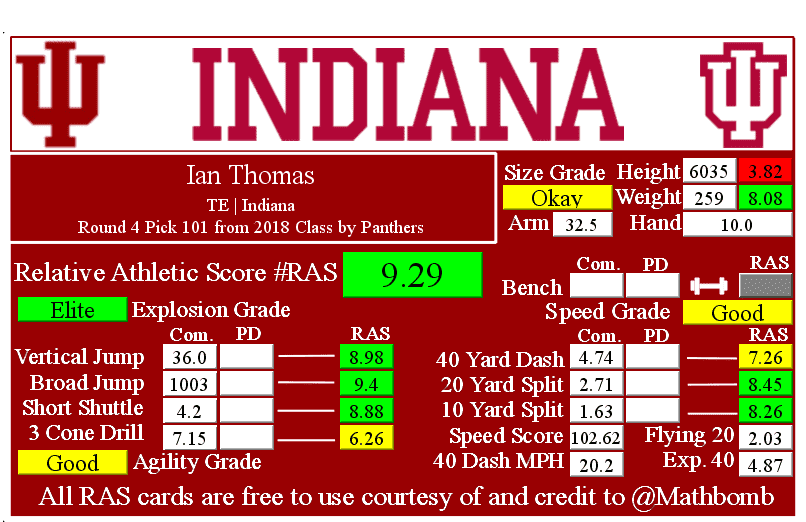 Where he excelled was in the metrics that measure explosion, showcasing the power he has in his lower body in the vertical jump and the broad jump.

It was his strength in the former that came to the fore on this 20-yard reception that put the Panthers on the edge of Buccaneer territory, Thomas leaping to make an excellent adjustment to the football and come down in bounds.

That drive stalled, but Thomas made sure the Panthers’ last shot at tying the game got off to a strong start, with a nine-yard reception coming after he faked a block and snuck wide open into the flat as the Panthers made an intelligent call to get him in space.

The Panthers fell short in their attempts to tie the game. Still, Thomas’ performance, however forgettable in a losing season, serves as evidence he can thrive in a starting tight end role, one in which he will be expected to jump into in the 2020 season under new head coach Matt Rhule.

Though his box score stats were not overly impressive, Thomas’ monstrous OSM grade against the Buccaneers was deserved.

He played a key role in a scoring drive by helping Newton turn what should have been a negative play into a positive one, while the 20-yard reception that was the longest gain of a potential game-tying drive was almost entirely down to his athletic ability.

Thomas’ production may have been moderate, but there is no doubt that his influence on the overall output of the offense was significant.

With the combination of athleticism and awareness he demonstrated against the Buccaneers, Thomas can become a consistent difference-maker in a third-year that should see him receive significantly more opportunities to showcase his physical gifts than he has to his point in his still brief pro career.

Thomas has the skill set to outperform his draft position. His numbers to this point do not reflect his potential, however, should he indeed become a focal point of the Panthers offense in 2020, Thomas’ stats at the end of his third season are likely to make for much more pleasant reading.