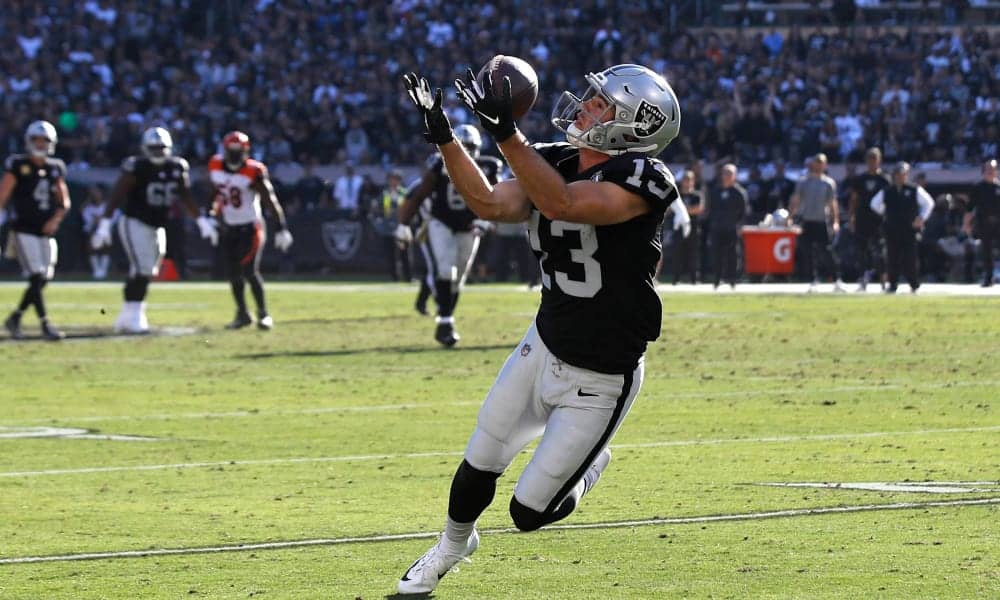 Hunter Renfrow has emerged as one of the best value picks of the 2019 NFL Draft. His selection in the fifth round by the Oakland Raiders did not receive the same fanfare as the ill-fated arrival of Antonio Brown. However, ten games into his rookie season, Renfrow is proving to be a perfect fit for quarterback Derek Carr and an offense that is surpassing expectations.

Mike Mayock has been widely praised for the rapid progress made by his first draft class as Raiders general manager. While Offensive Rookie of the Year candidate Josh Jacobs and defensive end Maxx Crosby have taken much of the acclaim, Renfrow’s consistent contributions have been just as valuable.

Renfrow’s importance to the Raiders’ passing attack was evident in his performance in their 17-10 win over the Cincinnati Bengals.

He did not light up the box score, recording just five catches for 66 yards, but his effort saw him finish Week 11 ranked second among wide receivers in Pro Football Network’s Offensive Share Metric (OSM).

OSM uses a series of algorithms and the NFL’s NextGen States to determine how responsible a player was for his offense’s production by looking at the factors only he can control.

As his elite grade of 45.02 indicates, Renfrow was a massive factor in the success of his offense last Sunday. The former Clemson star made three catches on third down that went for double-digit yardage, with two of those receptions coming across Oakland’s two touchdown drives.

Renfrow’s quickness, change of direction ability, and ball tracking skills frequently saw him come through in the clutch in his college career. Those same traits were all on display again as he helped the Raiders make a series of crucial conversions.

Their first third-down hook up was a deep connection for which neither is widely regarded. Carr has been much maligned as a downfield thrower. Still, he picked up 27 yards on this completion as Renfrow used his quickness to take advantage of a natural pick play and beat William Jackson with a double move before making a fantastic adjustment to the ball.

It is in the short passing game where Carr and Renfrow’s growing rapport is more consistently evident. Carr is statistically among the most conservative quarterbacks in the NFL and has an average depth of target (ADOT) of just 6.9 yards per attempt in 2019. Only five qualifying quarterbacks have an inferior ADOT to Carr this season.

Carr’s apparent unwillingness to push the ball deep plays to the strengths of slot receiver Renfrow. He can maximize the impact of those short completions and did so on the Raiders’ second and final touchdown drive. Renfrow cleverly contorted his body to adjust at the catch point that ensured he avoided potential big hits from two converging defenders, securing a reception to put the Raiders at the Bengals’ two-yard line.

The trust Carr has in Renfrow will only grow if he continues to make such plays in the congested area, and the Raiders quarterback can also afford to have faith in the rookie’s ability in space.

Renfrow’s second-longest play of the day saw him capitalize emphatically on the cushion provided to him by Jackson, who was playing off-man coverage. According to NextGen Stats, Renfrow averaged 3.9 yards of separation versus Cincinnati, the fourth most of all pass-catchers in Week 11, and he generated plenty of it on this third-quarter completion.

Having seen what Renfrow can do in the open field with the ball in his hands, future opponents may be reluctant to afford him such space. Regardless of how he is covered, expect Carr to continue to target a player who has proven reliable and made vital plays on scoring drives.

Renfrow may not be the wideout Oakland fans wanted to see become a Carr favorite. However, as the Raiders push for the playoffs, there is mounting evidence he is precisely the receiver their quarterback needed.

In this article:Hunter Renfrow, Oakland Raiders