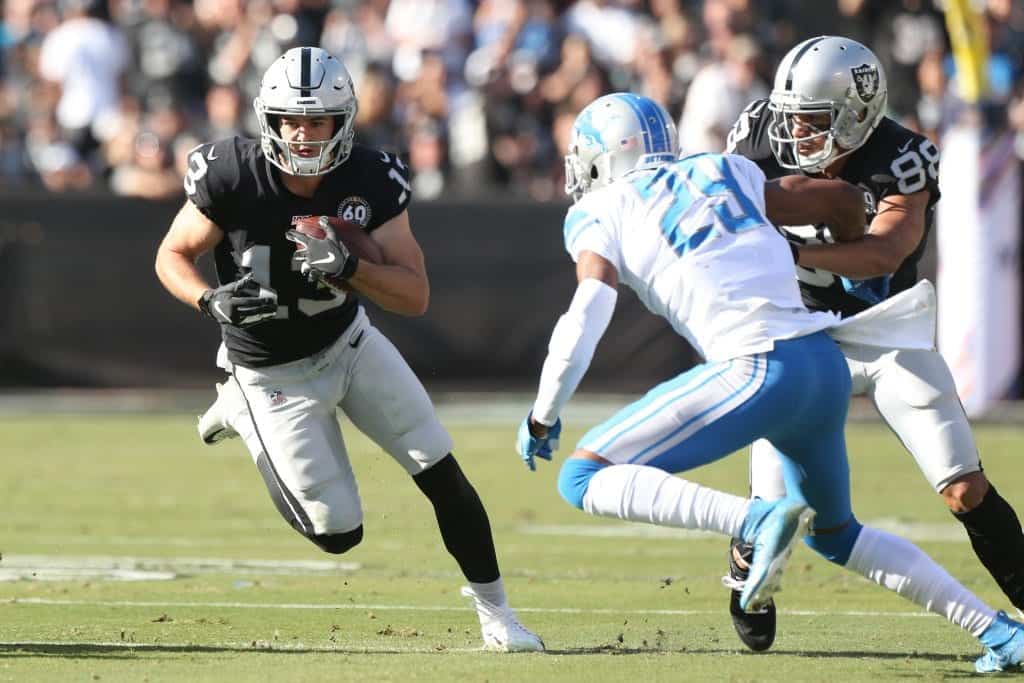 Photo Credit: Cary Edmondson-USA TODAY Sports
What's in this article? Click to show
Examining Renfrow’s OSM grades over the course of the season
The reason behind Renfrow’s massive improvement
Renfrow’s future with the Raiders

Hunter Renfrow had a slow start to his career with the Oakland Raiders. Through the first seven weeks of his rookie season, he had just 115 yards and no touchdowns. However, in the last three weeks, Renfrow seems to have settled into his role with the Raiders and has had some excellent statistical performances, amassing 184 yards and two touchdowns.
However, statistical improvement can sometimes be misleading. The fact that a player had more yards or scored more touchdowns might be the result of them getting more opportunities, or the players around them performing at a higher level, instead of an increase in their own abilities.

The goal of PFN’s Offensive Share Metric (OSM) is to clear up this confusion and show how much impact a player actually had on his own production, and on the team’s offensive production overall. Looking at Renfrow’s OSM grades, we can see that his recent statistical success has coincided with a similar increase in his impact on those statistics.

Examining Renfrow’s OSM grades over the course of the season

So far this season, Renfrow has only received enough targets to qualify for a grade in four games. In the first two, Weeks 2 and 5, he received grades of 28.23 and 23.44. Among other qualifying receivers, those grades were 43rd and 47th, respectively. That level of contribution is far from terrible; Renfrow certainly wasn’t hurting the Raiders with those performances. But recently, he has shown significant improvement.

In Weeks 9 and 10, Renfrow received grades of 40.79 and 42.53. Not only do those grades represent a massive improvement from earlier in the season, but they also place Renfrow among the best at his position. In Week 9, his grade was the eighth highest of any wide receiver. And although the Week 10 grades have yet to be finalized, Renfrow’s performance would have placed him at sixth a week ago. In short, not only has Renfrow contributed more on the stat sheet, but he has also increased his influence over his statistics to an elite level.

The reason behind Renfrow’s massive improvement

Explaining why Renfrow’s grade increased is actually reasonably simple. Most of the metrics that contribute to Renfrow’s OSM grades have remained relatively consistent throughout the season. Consider the amount of separation that he had on his targets as an example. Across the four games in which Renfrow earned a grade, defenders were on average 3.0, 3.1, 2.9, and 3.8 yards away from Renfrow at the time of the catch or incompletion. Compared to other qualifying receivers, those statistics are merely average. However, the more relevant point is how little they changed from early in the season to now, meaning they were not the primary factor increasing Renfrow’s OSM grades. And the majority of his other advanced metrics remained constant as well.

The primary factor that changed for Hunter Renfrow and the Raiders in the last several games was a much less complicated statistic: his catch percentage. It shouldn’t surprise you to learn that a receiver who catches the ball more often when it is thrown to them will have a higher OSM grade than one who doesn’t. In Renfrow’s case though, the difference was dramatic. Between Weeks 2 and 5, he caught just five of his 13 targets for a catch percentage of 38.5%. But over the last two weeks, that percentage has skyrocketed to 83.3%.

This trend really started in Week 8 against the Houston Texans, when Renfrow caught all four of his targets for 88 yards and a touchdown. Had he been targeted one more time, the resulting OSM grade would likely have been similar to Weeks 9 and 10. So, over the last three weeks, Renfrow has gone from catching approximately a third of his targets to catching almost all of them. He and Raiders quarterback Derek Carr appear to have formed a real connection on the football field.

Renfrow’s future with the Raiders

Hunter Renfrow will probably never be the star for the Oakland Raiders. The Raiders are a run-heavy team, preferring to place a large portion of the offensive burden on Renfrow’s fellow rookie Josh Jacobs. However, in the modern NFL, even the teams that run the ball the most need to pass on occasion, and the best friend of a run-heavy offense is a wide receiver that both the head coach and the quarterback know they can trust in critical situations. His touchdown against the Detroit Lions was an excellent example of this. Carr scrambled to his left after escaping pressure in the pocket, searching for a target. Renfrow, seeing his quarterback in trouble, worked his way open at the edge of the endzone and caught the game-winning touchdown. That kind of link between a wide receiver and his quarterback is invaluable to an offense, and Renfrow appears to be well on his way to becoming that player for the Raiders. If he continues down his current path, the 2019 fifth-round pick could quickly become an essential component for Oakland’s offense.