Jarvis Landry had an excellent season statistically in 2019, but how much value will the team really be losing if he misses games in 2020?

By Lucas Ellinas
August 5, 2020
What's in this article? Click to show
Using the OSM to examine Landry’s value to the Browns
Explaining why Landry’s grade was relatively low
How much value will Cleveland lose if Landry misses time in 2020?

Jarvis Landry had an excellent statistical season in 2019, despite playing the entire year with an injured hip that required surgery during the offseason. In total, he caught 83 passes for 1,174 yards and nine touchdowns, both career highs. Unfortunately, Landry is still recovering from that surgery, which forced the Cleveland Browns to place him on the active/physically unable to perform list.

However, Landry is hopeful that he will be ready to play by opening day. Despite Landry’s optimism, though, there is always the chance that he misses a game or more. The question then becomes how much value will Cleveland’s offense be losing if Landry misses significant time in 2020?

Using the OSM to examine Landry’s value to the Browns

Landry’s traditional statistics last season were impressive, but that method of measuring a player’s season doesn’t always tell the full story. Sometimes, a player will have great statistics, but still won’t be providing as much value to their offense as they could be. Fortunately, PFN’s Offensive Share Metric (OSM) was designed to rectify this flaw with traditional statistics. Using the NFL’s Next Gen Stats, the OSM evaluates how responsible a player was for the statistics that they produced.

As impressive as his traditional statistics were, Landry did not fare particularly well according to the OSM. His season-long grade of 32 ranked 53rd in the NFL among the 93 qualifying wide receivers. That is relatively average in the grand scheme of things, but you would likely better expect from a high-profile wide receiver like Landry.

Looking at his week to week grades, we can see that Landry’s mediocre level of play held throughout the entire season. Looking at the chart below, you can see his grades from each week in which he qualified, marked with black dots, compared to the league average for wide receivers, marked by the yellow line. 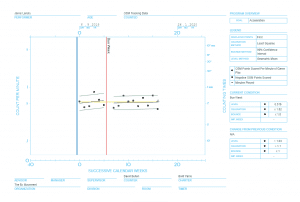 As you can see, Landry’s grade barely deviated throughout the season, hovering around the league average for the entire year. To a certain extent, consistency can have value because it means that coaches know what they are getting from their players. However, in an ideal world, Landry would show the same level of consistency, but at a much higher level.

Brown’s fans might be surprised to see Landry fare so poorly. After all, as I have already mentioned, his traditional statistics look very impressive. However, when you examine his advanced metrics, explaining why his grade wasn’t particularly impressive. While a player’s OSM grade is created by combining numerous factors, the most important by far in Landry’s case was his catch percentage. Last season, he caught just 60.14% of his targets.

That number ranked in the bottom half of the NFL among wide receiver’s who played enough to received grades (58th, to be precise). Naturally, catching the passes that are thrown to them is one of the easiest ways to increase the amount of impact a receiver has over the statistics they produce. A player like Michael Thomas, who catches upwards of 80% of his targets, has a more positive influence on his statistics than Landry because he does a better job of taking advantage of his opportunities. Meanwhile, throwing the ball to Landry results in an incompletion almost as often as it does a catch.

How Landry performed before arriving in Cleveland

Landry didn’t always provide such limited value to his roster. Back when he played in Miami, Landry was a significantly more efficient player. Due to a lack of data, we can only look at grades going back to 2016, but during Landry’s last two seasons with the Dolphins (2016 and 2017), he received grades of 36.62 and 37.68. Both grades ranked eighth in their respective seasons, which is a dramatic improvement over how he has performed with the Browns, as well as representing phenomenal performances overall.

So, what changed once Landry left the Dolphins? Well, I’ve already mentioned how his low catch percentage heavily impacted his OSM grade last season. That was also true in Miami, but there he performed significantly better.

In 2016 and 2017, Landry caught 71.76% and 69.57% of his passes, respectively, both of which are very respectable numbers. But then, in his first season in Cleveland, his catch percentage plummeted to just 54.36%, a more than 15% decrease from the previous year. His percentage from last season did represent an improvement, but he still caught passes at a rate of around 10% lower than what he achieved with the Dolphins. That is an enormous difference, one that easily accounts for the precipitous decline in Landry’s grade.

The change in Landry’s role after switching teams

You might be inclined to point out that Landry occupies a different role with the Browns than he did in Miami. And you would be right. In Cleveland, Landry is targeted significantly further downfield. In 2016 and 2017, Landry was targeted just above six yards downfield on average. With the Browns, that number has increased by about four yards.

This change is not taken into account when calculating Landry’s grade because it is not something he could control. However, it does give us some valuable context regarding the role in which Landry operates the best. He provides a great deal more value to his offense when catching short passes, rather than deep ones, which is why he performed better according to the OSM when in the Dolphins offense. It also indicates that, going into 2020, Landry might provide more value to the Browns if they adjusted his role.

How much value will Cleveland lose if Landry misses time in 2020?

Even though Landry’s provided relatively limited value to the Brown’s offense last season, it is worth noting that he was still their highest-graded player in 2019. As such, losing him for an extended period of time would be a significant blow to their offense. Additionally, despite the team’s overall struggles and Landry’s own injury, he did show improvement during his second season in Cleveland. That could be an indicator of him becoming more comfortable with his new role, which means that if Landry is healthy next season, we might see him continue to grow within the offense.

Alternatively, under new head coach Kevin Stefanski, the Browns might utilize him in a different way, perhaps in a manner more akin to how he was used with the Dolphins. In that case, we could see Landry return to providing an increased level of value in 2020. Hopefully, he can start playing again sooner, rather than later, allowing us to watch how he develops during his third season in Cleveland.