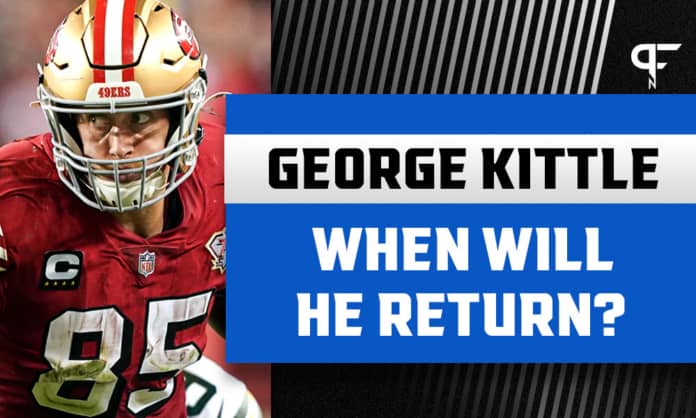 When is George Kittle able to return for the 49ers after the tight end was placed on the IR with a calf injury ahead of Week 5?

By Ben Rolfe
October 10, 2021
What's in this article? Click to show
How long is George Kittle out?
How the calf injury played out
What should fantasy managers do with Kittle?

After playing through the pain in Weeks 3 and 4, George Kittle was placed on the injured reserve with a calf injury ahead of the San Francisco 49ers’ Week 5 matchup. What is the timeline that led to Kittle’s injury leading to the 49ers placing their star tight end on the IR, and when might San Francisco fans and fantasy football managers expect to see him back on the field?

How long is George Kittle out?

Once a player is placed on the IR, he must remain there for a minimum of three games. Now, you may notice the emphasis on games in that previous sentence. Well, that is because it makes a big difference as to when Kittle can return from his injury. With the 49ers having their bye in Week 6, Kittle will not be eligible to return until Week 9 at the earliest. That is somewhat of a blow to fantasy managers who might have thought that Kittle would actually only miss two games after being placed on IR.

How the calf injury played out

Kittle’s calf injury seemed to come out of the blue ahead of Week 3. Kittle had not been listed on the injury report in Week 1 or 2 but appeared for the first time on Wednesday of Week 3. Let’s look at how the timeline has played out.

09/26/21: Despite being listed as questionable for Week 3, Kittle is active against the Packers. He plays every single offensive snap and is targeted 9 times, pulling in 7 for 92 yards.

09/29/21: Kittle is again absent from 49ers’ practice. He would also miss Thursday’s practice before practicing in a limited fashion on Friday.

10/08/21: A significant change to the pattern from the week before sees Kittle not practice on the Friday before Week 5. He is then listed as doubtful heading into the game against the Arizona Cardinals.

What should fantasy managers do with Kittle?

There is really not very much Kittle’s fantasy managers can do. If you have an IR spot in your league, great. Stash him there and wait. If not, then you may have to simply swallow the bench spot for Kittle.

If you drop him, someone else will quickly scoop him up. That will likely come back to haunt you when he returns and is the stud fantasy tight end we know he can be for the 49ers.

It is a tough position to be in because even if you try to trade Kittle, the value will not be worth it. No one is going to give you the value that Kittle can provide when he returns. The one caveat is if you are 0-4 or 1-3 in a redraft league.

In that situation, then shop Kittle around and see what you can get despite the injury. Kittle’s return won’t matter if you do not win at least a couple of the next four games. Your season will already be over.