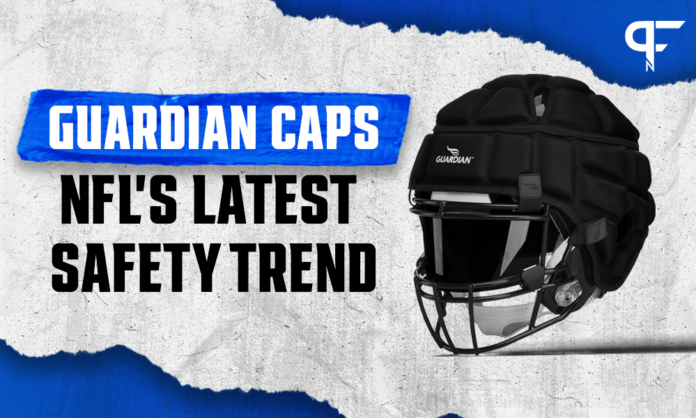 Across NFL training camps, several players have been sporting Guardian Caps to their helmets in the latest advancement to help prevent CTE.

As you have scrolled through your favorite team’s Twitter or Instagram feeds this week, you might have noticed something jarringly different. Gone, for many, are the hard-shell NFL helmets football players have worn for decades. They have been replaced by something that looks like it’s out of science fiction. They’re called Guardian Caps.

The easiest way to describe the visual, for those who haven’t: A helmet that Marvel’s The Thing would wear if he played football and was somehow at risk of developing Chronic Traumatic Encephalopathy (CTE).

Feels good to be back ⚡️🤘🏽 pic.twitter.com/km66ONFZiF

These helmet covers are the Guardian Caps. They’re designed to dissipate the dangerous energy of repeated blows to the head. They snap on top of the players’ regular helmets, providing two levels of protection.

“Obviously, we are hitting every single play, all practice, all year,” said Miami Dolphins defensive lineman Zach Sieler, one of dozens of NFL players now practicing with an added layer of protection. “It’s supposed to help us with preventing concussions. The Dolphins have done a really good job at player safety and making sure that they are giving us the best and the safest equipment.”

The NFL has made dramatic changes to the game in recent years in an effort to reduce the brain injuries that lead to CTE. And the league deserves credit for a significant decrease in concussions, including a 5% year-over-year drop in the 2020 season.

But concussions aren’t the only cause of CTE. Subconcussive head impacts are another. That’s where the Guardian Caps, which the parent company says reduces the G-force of a collision by up to 33 percent, are particularly effective.

At least, that’s the position held by the American Football Coaches Association, which encourages its members to consider joining the hundreds of pro and amateur football teams that use the product.

“Guardian Caps effectively reduce the overall buildup of small blows that occur over the course of a season by allowing greater energy dissipation at the point of contact with a pliable material,” the AFCA says on its website. “The cap is attached to the outside of the helmet in such a way that it allows for shifting and movement independently of the helmet, which redirects some of the blow upon contact.”

Offensive and defensive linemen are most at risk for subconcussive injuries. Therefore, they’re the ones most commonly spotted wearing Guardian Caps at NFL practices. But even some skill position players — including Los Angeles Chargers RB Austin Ekeler — have strapped them on in recent days

“I mean, you look goofy as heck, but other than that, you look fine,” Sieler said with a chuckle. “But if it is going to help prevent concussions, which could take you out for a week or a career, I’m going to be happy with that.”