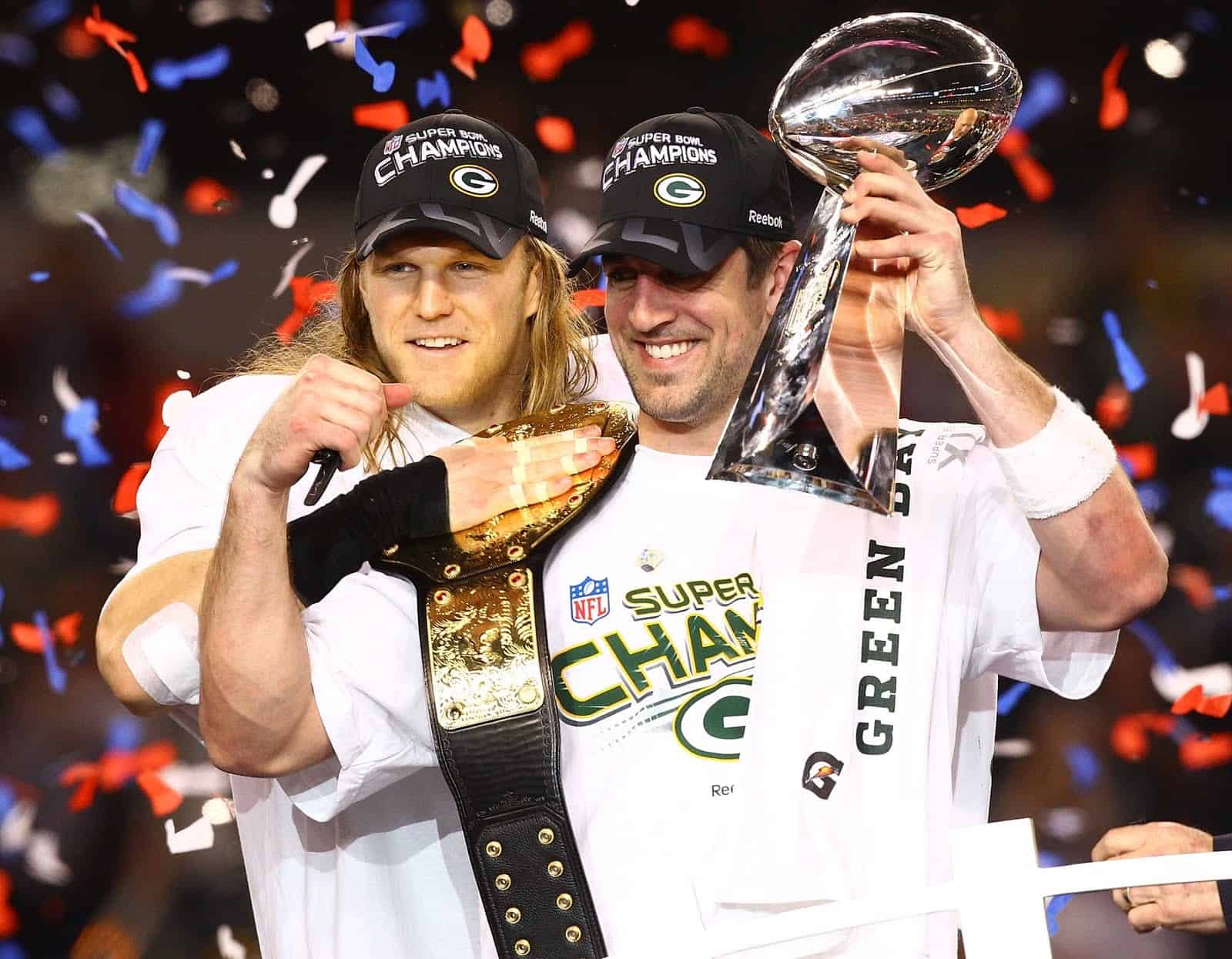 We are less than two weeks away from Matt LaFleur’s first draft as head coach of the Green Bay Packers. But before we enter a new era in Green Bay, let’s reminisce one last time on the Mike McCarthy days. Here is a look back on their last ten first round picks:

Raji is the highest player selected by the Packers since they took A.J. Hawk fifth overall in 2006. While his career in Green Bay was short-lived (six years), he is still one of the most beloved players of the Mike McCarthy era. Not only did fans love his large (quite literally) and light-hearted spirit, but his pick-six and hula dance in the 2011 NFC Championship game is one of the most iconic plays in the franchise’s history.

Raji was an anchor on the Packers defense during their championship run in 2010, but also saw snaps offensively. Starting in the 2011 playoffs, the Packers experimented with using Raji’s 337-pound frame as a goal-line fullback. This birthed Raji’s nickname “The Freezer”– a play on Chicago Bears great William “The Fridge” Perry.

It’s hard to think about the Super Bowl XLV champion Packers without B.J. Raji coming to mind. While his time in Green Bay was limited, his impact on the franchise is eternal.

Matthews is another Packers great synonymous with the 2010 Super Bowl run. His selection in the 2009 Draft, however, was somewhat controversial. Green Bay fell in love with Matthews throughout the draft process; so much so that they traded a second and two thirds to New England to select him at 26. It was a surprise move for most because Matthews had a second-round grade almost universally throughout the league.

Matthews immediately validated himself as a first-round pick, however. In his rookie season he broke the franchise record for sacks by a rookie (10), he became the first rookie Packer to be selected to a Pro Bowl since James Lofton in 1978 and was named the NFC Defensive Rookie of the year.

He followed up a stellar rookie season with an even more impressive second act. In year two, Matthews made his first All-Pro team and was named the PFWA NFL Defensive Player of the Year. His biggest accomplishment that season, however, was his performance in Super Bowl XLV. On the first play of the fourth quarter, Matthews striped Pittsburgh running back Rashard Mendenhall and forced a momentum-swinging turnover. While quarterback Aaron Rodgers walked away with MVP honors, Matthews was also a deserving candidate.

Since the 2010 Super Bowl, Matthews has made two All-Pro teams and four Pro Bowls. A plethora of injuries, however, have stunted his production in the last few years. The organization this offseason finally decided to part ways with Matthews after ten years with the team. While he is now a member of the L.A. Rams, to most fans he will always be a Green Bay Packer.

When healthy, Bryan Bulaga has been a key contributor to Green Bay’s offensive line. His first start didn’t come until week five of his rookie season but started every game the rest of that year; including the Super Bowl. That season Bulaga became the youngest player to ever start in a Super Bowl (21 years 322 days).

Most fans will remember the historic stretch of games Aaron Rodgers went on at the end of the 2010-11 season. Bulaga was a huge reason why. His impressive rookie season earned him NFL All-Rookie team honors.

Since that year, however, Bulaga’s career has been shrouded with inconsistency. Not necessarily inconsistent play; rather, he hasn’t been able to stay healthy consistently. He only played nine games in 2012 and then missed the entire 2013 season with an ACL injury. In fact, throughout his entire career, only once has he played all 16 games (2016) and has only played 14 or more games three times.

2019 will be a pivotal year for Bulaga, as there have been murmurs around the organization that his days with the green and gold may be numbered.

Want to talk about a bust? Insert Derek Sherrod.

Coming off of Super Bowl XLV, Green Bay selected Sherrod 32nd overall. After Aaron Rodgers’ unbelievable end to the 2010 season, the organization wanted to do everything they could to protect him. Sherrod was supposed to be the missing piece opposite Bulaga that would solidify the O-line and allow Rodgers to thrive. Unfortunately, injuries – and quite frankly horrendous play – led to Sherrod only starting one game in four years.

Nick Perry’s career has been a bit of a roller coaster. At times, he showed tremendous potential and looked like a competent running mate alongside Clay Matthews. But – stop me if you’ve heard this before – multiple injuries plagued him from reaching his ceiling. He only appeared in six games his rookie year and has never played a full 16 game season.

2016 was by far Perry’s best year. Green Bay had just re-signed him to a one year $5.05 million “Prove it” deal, and he was motivated for a bigger contract. Perry’s 11 sacks marked his first (and only) double-digit sack season. This led to the team signing him to a five year $60 million contract following that season. In hindsight, that was an awful deal for Green Bay. He has only played in 18 games the last two season and only registered 8.5 sacks.

The team cut ties with Perry back in early March – a move that was seen coming a million miles away – and he is yet to be picked up by another squad.

There was a lot of hype around Jones when they drafted him at 26 in 2013. Leading up to the draft, viral videos surfaced of Jones at the Senior Bowl going up against OT Eric Fischer (selected number one overall that year) where Jones looked dominant. At this time, Green Bay was a perennial Super Bowl contender but was looking for a dominant pass rusher to put them over the top. But after spending first round picks on pass rushers in back to back years, neither guy panned out.

Jones was able to stay relatively healthy, playing at least 13 games all four years with Green Bay. The on-field production however just wasn’t there. In four years with the team, Jones only produced nine sacks. Green Bay let him go following the 2015 season and has struggled to maintain a roster spot anywhere else in the league.

Just the image of Roger Goodell having to walk up the podium and utter the words “Ha Ha Clinton-Dix” on national television would have made this pick worth it. Fortunately for Green Bay, there was also a solid football player behind the name.

After three consecutive years of first-round busts, Green Bay was finally able to get a Pro Bowl caliber player 2014. From the start, Clinton-Dix was a home run. Most mocks had him going tenth overall to the Detroit Lions, if not sooner. It was a shocker when he was still there at 21 for Green Bay.

Clinton-Dix was remarkably healthy throughout his Green Bay career, not missing a single game – a breath of fresh air for Packer fans. While he only made one Pro Bowl and one All-Pro team (both in 2016), he was the anchor of a defense that played in two NFC Championship games and another NFC Divisional round game. His playmaking ability on the back end was reminiscent of what Nick Collins brought to the position before his career-ending neck injury.

Despite success throughout his first five years, Green Bay traded Clinton-Dix to the Washington Redskins midway through the 2018 season. 2018 was the last year on his rookie deal, and Green Bay did not want to pay him top dollar in free agency. The Packers have since filled the hole at safety, signing former Bears safety Adrian Amos in free agency. Ironically enough, the Bears signed Clinton-Dix to replace Amos on their roster this offseason as well. The career of Clinton-Dix in Green Bay was short-lived but exciting. While Packer fans might be convinced that his best days were left back at Lambeau, deep down there is a little anxiety about now facing this guy twice a year.

Damarious Randall was by no means a bust in Green Bay, but with as much talent as he possessed, his Packers career was slightly underwhelming. Randall was converted from a college safety to a cornerback at the next level and suffered some growing pains as a result. He started just nine games in his rookie campaign but showed some flashes with three interceptions and 14 passes defended. A groin injury plagued his 2016 season, but he bounced back with a solid 2017 year before ending the season on injured reserve with a knee injury.

In a somewhat unexpected move, the team traded Randall away following the 2017 season in exchange for Cleveland Browns quarterback DeShone Kizer. While he may never be an elite player, Randall has shown enough talent throughout his career to solidify a starting role. It will be interesting to see how he develops in Cleveland, but it may be some years before the verdict on that trade is revealed.

Clark started his NFL career with a slow rookie season but quickly picked up the pace in year two and three. While the stats are not exactly eye-popping, he has totaled 110 tackles and 10.5 sacks the last two seasons. He was also named a Pro-Bowl alternate in 2018.

Clark’s career is still young and could go in many directions. The good news for Green Bay is that everything seems to be trending in the right direction. He has gotten significantly better each season, and his production has validated that. If he can stay healthy – and based off of recent history of young Packers players, that is a big if – he could become one of the NFL’s premier interior defensive linemen. It will be interesting how he fairs in year two of Mike Pettine’s defense.

This was a pretty significant pick for the Packers, as it was the first ever selection for GM Brian Gutekunst. It’s too early to put a grade on this pick, but so far so good. Alexander was one of the bright spots on what was otherwise a very depressing season. His strides of progression from week to week were extremely pronounced, and if he can continue that trajection into year two then he will be one of the league’s best corners.

Although he was an All-Rookie team performer last season, expectations for year two should be somewhat conservative. It’s common to see young corners struggle in year two after a breakout rookie campaign. Packers fans should remember Casey Hayward and the trajectory his career took early on. After a historically great rookie season, he struggled with consistency the remainder of his Packers career. Now, a lot of that inconsistency was due to injuries, but it goes to show that year one success doesn’t guarantee continued success.

Overall though, Alexander is an incredibly intriguing prospect in Green Bay’s secondary, and his selection left fans with a tremendous first impression of Brian Gutekunst.