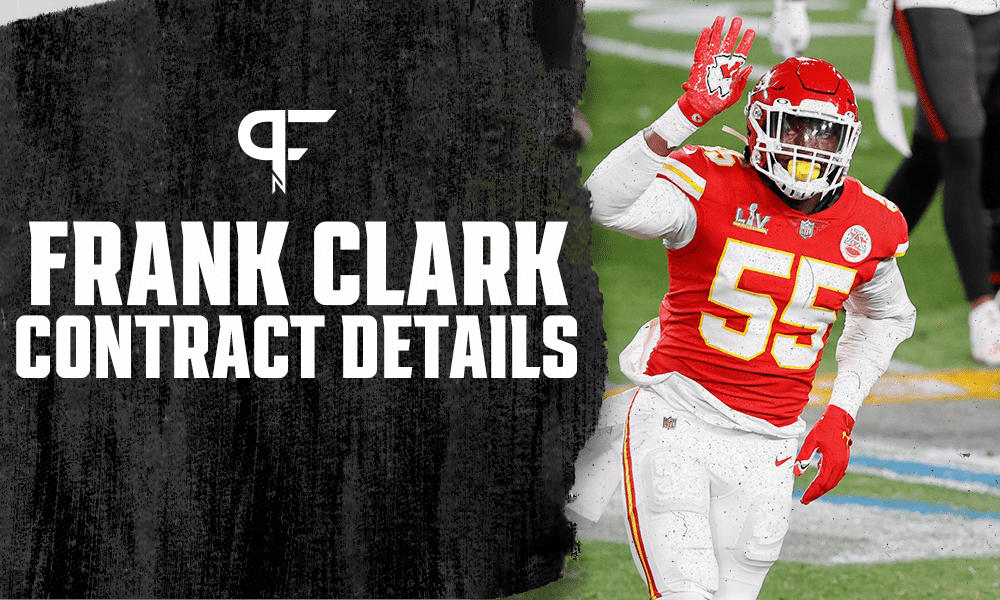 By Ben Rolfe
June 25, 2021
What's in this article? Click to show
Frank Clark’s contract details and bonuses
What impact does Clark’s deal have on the Chiefs’ salary cap?
What options do the Chiefs have with Clark’s contract?
Want more NFL news and analysis?

With Frank Clark hitting the headlines for all the wrong reasons during June, what is the situation with his NFL contract? Let’s examine the details of Clark’s contract, his salary-cap implications with the Chiefs, and the Chiefs’ options going forward.

After playing on the franchise tag with the Seattle Seahawks in 2019, Clark signed a five-year contract with the Chiefs. His contract is worth $104 million across the five seasons, including a $19 million signing bonus and $43.8 million guaranteed at signing.

The guarantees on the contract were made up of the signing bonus and Clark’s 2019 and 2020 base salaries. $7 million of the 2020 base salary was paid as an advance in 2019, meaning it is treated similarly to a signing bonus and prorates across the contract. Clark’s $18.5 million salary in 2021 became fully guaranteed at the start of the 2020 league year.

Clark has three years remaining on his contract

Clark and the Chiefs signed the five-year contract in 2019. It end after the 2023 season, leaving three more seasons on the deal. However, the 2021 season is the final year with guarantees.

What impact does Clark’s deal have on the Chiefs’ salary cap?

What options do the Chiefs have with Clark’s contract?

With the latest news surround Clark’s arrest, what options do the Chiefs have with Clark’s contract?

Releasing Clark in 2021 would have been extremely expensive

What are the implications of the Chiefs releasing Clark next season?

The Chiefs may decide to ride through the 2021 season with Clark on the roster. If that is the case, the Chiefs can release Clark with few concerns next offseason. With no guaranteed salary remaining, it would just be the remaining prorated bonus that would be due. That would leave $13.6 million in dead money on the Chiefs’ salary cap in 2022.

However, if the Chiefs release Clark with a post-June 1 designation, they would have $6.8 million in dead money in both 2022 and 2023.