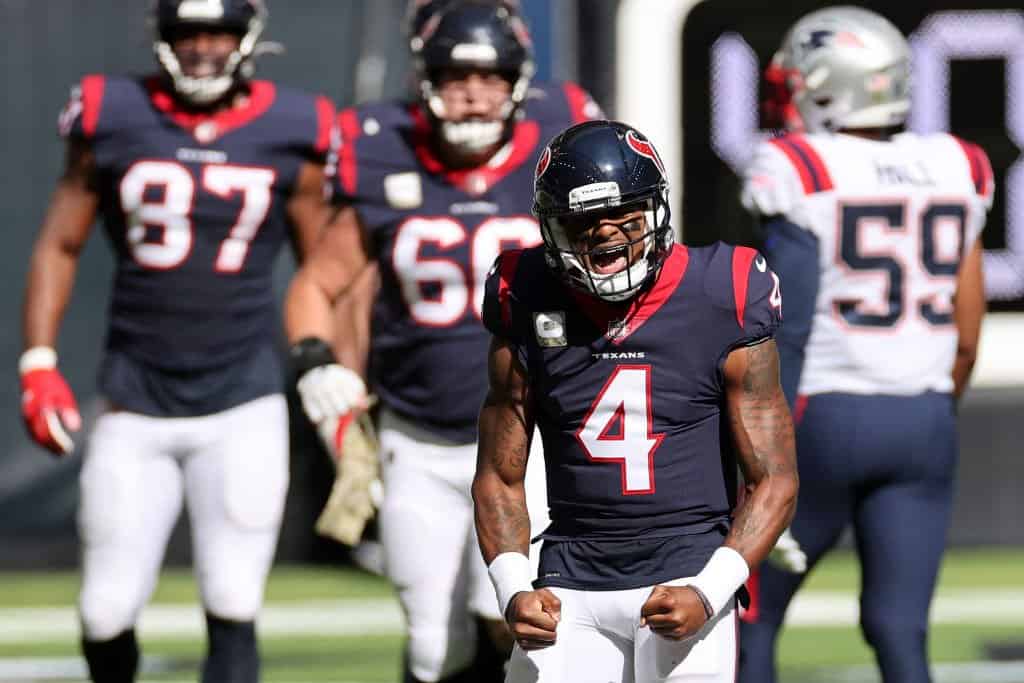 HOUSTON, TEXAS - NOVEMBER 22: Deshaun Watson #4 of the Houston Texans reacts following a touchdown in the first quarter during their game against the New England Patriots at NRG Stadium on November 22, 2020 in Houston, Texas. (Photo by Carmen Mandato/Getty Images)
What's in this article? Click to show
Sources indicate that the Dolphins could be the desired destination for Watson
What would it cost for the Dolphins to acquire Deshaun Watson?
Want more NFL news and analysis?

We learned today that Deshaun Watson officially put in a trade request out of Houston. Does Deshaun Watson have his eyes on the Miami Dolphins as his preferred landing spot? Rumors have been swirling for weeks about which NFL teams may be in the running for Watson, but could the Dolphins be the perfect match for Watson and the Houston Texans?

The Dolphins have been a big part of the conversation surrounding Watson since it became clear he was unhappy.

The Dolphins are one of a few potential landing spots that would have the draft capital to acquire Watson. Now, it appears that the Dolphins and Watson may have a mutual interest in making that trade a reality. Sources have told Pro Football Network that, should the Texans officially open up trade negotiations with other teams about Deshaun Watson, the Miami Dolphins will absolutely involve themselves in the trade discussions.

A key question surrounding why Watson is looking to get out of Houston has been around the culture of the organization. According to Barry Jackson and Adam Beasley of the Miami Herald, that culture is part of the reason Miami is one of Watson’s preferred destinations.

“Watson reportedly likes the culture that Brian Flores has built with the Dolphins.”

They went on to quote a source who said that “Watson feels the situation [in Houston] is unfixable, and Miami is seen as the frontrunner behind the scenes.”

On Tuesday, PFN’s Insider Tony Pauline heard down in Mobile that “speculation by league decision-makers at the Senior Bowl has smart money on the New York Jets.” But Watson may have other plans. Sources told Pauline last night that Watson prefers to play for the Miami Dolphins moving forward.

What would it cost for the Dolphins to acquire Deshaun Watson?

On the January 12th edition of PFN Quick Slants, Benjamin Allbright discussed how the price could be a major stumbling block for acquiring Watson.

“Hypothetically, what would it take to move Deshaun Watson in a vacuum? He said it would take three firsts, three seconds, and a Pro Bowl-caliber player would start the conversation. So the idea that you’re going to get Watson for Tua and a first and something else is laughably ridiculous. It’s not happening. You’re not getting Deshaun Watson for less than it cost Jamal Adams.”

That price is unlikely to have changed massively for the Dolphins, even with the latest news of Deshaun Watson’s trade request. Watson making his desire to leave known will likely have impacted Houston’s asking price a little.

However, the Texans still have ample leverage over the situation. Despite his trade request, the Texans can still dictate Watson’s landing spot to some extent. Watson remains under contract through 2025 and will be subject to fines if he does not report to league-mandated events. Additionally, the Texans could request Watson pay back portions of his signing bonus.

Watson does have the power to veto any potential deal due to his no-trade clause. However, any team Watson wants to go to will have to agree on a price with the Texans first. Therefore, if the Dolphins are to make a trade work, multiple first-round picks, Tua Tagovailoa, and potentially more picks in later rounds could still be required.

One aspect for the Dolphins when considering the deal is the structure of Deshaun Watson’s contract. Giving up a potential franchise QB and multiple first-round picks is likely not that attractive when you have to pay a QB over $40 million a year. However, the way Deshaun Watson’s contract is structured does not make that the case for the Dolphins.

Watson signed a $37 million signing bonus when he agreed to his contract extension. That bonus is prorated across the next four years of the contract at $5.4 million per year. In the event of a trade, all of that bonus money would remain with the Houston Texans. For the team acquiring Watson, $5.4 million would come off Watson’s cap number in each of those next four years. Therefore, Watson’s cap numbers for the Dolphins would be as follows:

Those salary cap numbers are more than manageable for a quarterback who led the league in passing yards. Something that will play a part in the price is the dead money Watson would leave behind. In the event of a trade, Watson will leave $21.6 million in dead money on the Texans’ 2021 salary cap.

Acquiring Deshaun Watson will not be cheap for the Dolphins in terms of draft capital. However, it could be worth it for a team that looks set to challenge sooner rather than later.

In this article:Deshaun Watson, Featured