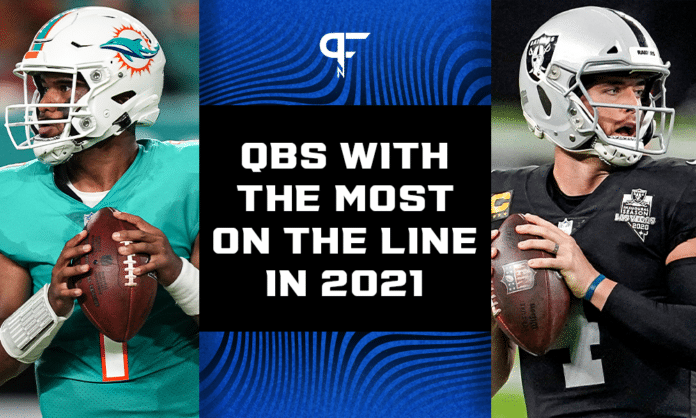 Five NFL quarterbacks with the most on the line in 2021

Entering the 2021 NFL season, there are a handful of quarterbacks who could be on the hot seat. Which QBs have the most to prove this year?

NFL careers will be made — or derailed — beginning this weekend, with some of the league’s best-known quarterbacks entering crossroad seasons. Who will secure their spot (and the bag), and who will give way to Spencer Rattler, Sam Howell, or Malik Willis?

NFL quarterbacks with the most on the line in 2021 | AFC

These AFC signal-callers must prove their worth in 2021 or risk being on the hot seat.

How can a quarterback taken No. 5 overall with nine career starts possibly be on the hot seat? When a front office quietly eyeing Deshaun Watson is turning up the heat.

Tua is the undisputed starter in Miami this year. And he almost certainly would have been even if the Dolphins traded for Watson. However, Tua has much to prove after a rocky rookie season — which included two benchings and an egg-laying in a win-and-in game against the Bills.

In four months, he’ll either cement himself as the Dolphins’ franchise quarterback or become the latest in a long line of failed projects since Dan Marino.

The narrative surrounding Carr has always been a bit unfair. He’s had a passer rating north of 100 in each of the last two seasons and has thrown for over 4,000 yards in each of the past three.

Still, the Raiders could cut Carr after this season with no dead money, and it’s hard to envision Jon Gruden rolling with him for a fifth season if they miss the playoffs in the first four.

NFL quarterbacks with the most on the line in 2021 | NFC

Which NFC quarterbacks have the most to prove in the 2021 season?

Giants co-owner John Mara isn’t going to be cool with another ho-hum year out of the Daniel Jones/Dave Gettleman partnership, stating this last month:

“I expect to win more games than we did last year. Hopefully we’re going to be a playoff team this year. You can call it anything you want,” Mara said during training camp. “I just want to feel like, after the last game, that what we have here is a team that can win a Super Bowl.”

Translation: Anything less than a big leap forward from 6-10 means a housecleaning in New York.

Jones is entering Year 3 and hasn’t looked like a franchise quarterback in his first two seasons. The No. 6 overall pick in the 2019 NFL Draft is 10 games under .500 as a starter and threw nearly as many interceptions as touchdowns in 2021.

If Matthew Stafford doesn’t win now, when? He has an elite defense, a brilliant coach, and after a decade in Detroit, he’s got the best weather on the planet in Los Angeles. Stafford could have gone through the paces and finished his career as a loveable Lions’ lifer (and too-often loser).

Yet, he didn’t want to go out like that, orchestrating a trade to Sean McVay and the Rams. We’re about to find out if the Lions lost all of those games despite Stafford, or in part because of him.

A Super Bowl will change his legacy, but a disappointing season will seal it.

The former No. 1 overall pick’s career basically hit rock bottom 18 months ago. After making nearly $21 million in five seasons with the Buccaneers, Winston took a minimum deal to back up Drew Brees. Throwing 30 interceptions in a contract year will have that effect.

Winston wisely linked up with Sean Payton in an effort to get things back on track, and after Brees’ retirement, re-upped in the offseason for $5.5 million. That’s backup money, but he won the starting job over Taysom Hill — and the battle wasn’t particularly close.

Winston could play his way to a nine-figure contract and find a permanent home in the Big Easy with a monster year.