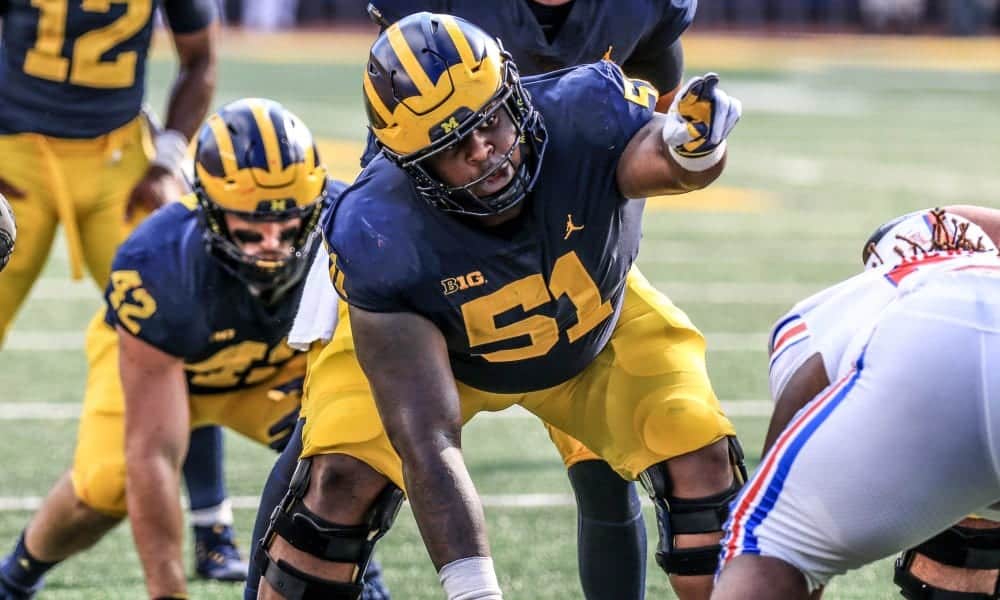 Draft day is finally here, folks. All the mock drafts, rumors, and smokescreens generated are now rendered futile, as we are merely hours away from entering the first round phase. Like most drafts, there figures to be some surprise selections that few anticipated, as well as perceived blue-chip prospects that slip through the cracks. I highlighted four prospects that could potentially become first-round risers in 2020, and hear their names called earlier than expected.

Had it not been for pre-draft labrum surgery, Jaylon Johnson would be a surefire first-round pick. In fact, odds are favorable that he comes off the board on Thursday night despite the surgery.

As our own Tony Pauline mentioned yesterday, four teams — the Las Vegas Raiders, Jacksonville Jaguars, Minnesota Vikings, and Seattle Seahawks — are high on the Utah cornerback. This information is consistent with what I heard over the past few weeks as well, so it is feasible that Johnson could hear his name called in the latter stages of opening night.

Johnson, my third-ranked cornerback prospect, is especially enticing for teams that covet lengthy, physical perimeter defenders, which aligns with the teams listed above. At six-feet, 193 pounds, Johnson has outstanding press technique, but also the fluidity and click-and-close ability to mirror wide receivers, and the length to disrupt the catch point. I’m not sure if he is a Day 1 starter on the outside, but the upside is there to evolve into a shutdown cornerback in time.

It’s not often you see an interior offensive lineman hear his name called in the first round, but Michigan’s Cesar Ruiz is a special talent. Further helping his cause is that while his primary position is center, Ruiz offers guard versatility. At 6-foot-3, 307 pounds, Ruiz is a fluid mover that plays with quick, active hands and leverage. The New Jersey native is a technically sound blocker and a plug-and-play option. He could be an alluring option for a team like the Seattle Seahawks or Baltimore Ravens late on draft night.

Another rapid riser, big-bodied pass catcher Michael Pittman Jr. has capitalized on a strong pre-draft cycle. As Pauline mentioned on Tuesday, “one team has Pittman graded as a top-15 player on their draft board.”

At 6-foot-4, 223 pounds, with a gritty play-style reminiscent of wide receivers of old, there is a lot to like about Pittman’s game. The USC product possesses the ability to work all three levels, but his specialty is winning jump-ball situations, where his physicality, frame, and high-point skills makes him near-impossible to defend in the red zone. Often knocked for his long speed, Pittman demonstrated his second-gear at the NFL Scouting Combine, turning heads with a 4.52 40-yard dash.

Pittman, who embraces special teams, should quickly earn a role as a red zone threat and special teams ace in the early goings, but the polished pass catcher will find himself in the starting lineup sooner than later. Pittman strikes me as a Baltimore Ravens-style prospect, and he would adequately complement the speedy Hollywood Brown, but I could see him going anywhere from 27 to 32 if he makes the first-round surge on Thursday.

In order for Jalen Hurts to come off the board on Thursday, Jordan Love would likely need to be selected within the first 20 picks. With teams like the New England Patriots and New Orleans Saints looming at the back end of the first round, Hurts, a proven winner who played at a high level for two major college programs, could be an inviting long-term option to lead their respective franchises. Also, don’t rule out the possibility of a team looking to trade back into the first round in a ploy to secure their quarterback of the future as opening night draws to a close.

After spending his first three seasons at Alabama, Hurts transferred to Oklahoma in January 2019 for his final year of eligibility. In a prolific senior campaign in which he finished second in the Heisman Trophy race, Hurts threw for 3,851 yards, 32 touchdowns, and eight interceptions, completing 69.7 percent of his passes. For his career, Hurts passed for 9,477 yards, 80 touchdowns and 20 interceptions.

Known for his toughness, leadership, and poise in big moments, Hurts figures to be an attractive option for a myriad of teams in search of their eventual face of the franchise. Though he’s likely poised to be one of the first picks off the board on Friday, it only takes one team to see the value and make the move.