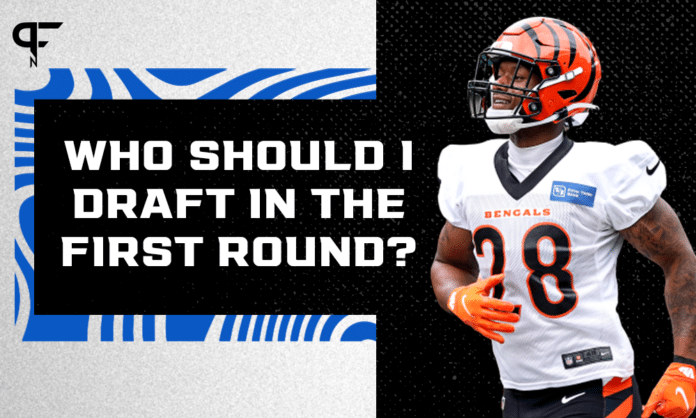 First-round fantasy football picks for your fantasy drafts in 2021

With less than a week until the NFL season kicks off, which players should be the first-round draft picks in 2021 for fantasy football?

Even amongst the best players in the NFL, not every player should be a first-round pick in fantasy football drafts. Some just carry too much risk to be a top-10 or 12 pick. With less than a week until the start of the fantasy football season and final drafts being held, which players should be the first-round selections in 2021?

No one is coming here for me to tell you that Christian McCaffrey should be a first-round pick. Not only is he that, but he’s the consensus No. 1 overall draft pick. It could be argued that McCaffrey is in an RB tier of his own. So let’s just knock out the first-round drafts picks and move on to where the debates start.

Players that should be first-round fantasy draft picks in 2021

We see the guys who are first-round picks in 99% of 1QB drafts. Now, we can look at players who I believe should be first-round fantasy football picks in 2021 drafts. They all have the pedigree along with the consistency that can be relied on as your first pick.

Once the first tier of running backs are off the board and the first receiver, Travis Kelce should be quick to follow. Normally, taking a TE as your first pick would be a head-scratching move. Kelce, however, is a difference-maker.

Kelce averaged 21 points per game last season (PPR) and 18.5 since 2018 (47 games). Those are WR1 numbers. There is a powerful argument for Kelce to be the first non-RB off the board in fantasy football drafts.

I am still trying to figure out why Ezekiel Elliott has somehow been written off and forgotten this offseason. He’s a combination of both Henry and Kamara in a way. In five seasons, he’s finished as the RB2, RB12, RB5, RB3, and RB9, respectively, averaging 1,276 rushing yards, 391 receiving yards, and 11.2 total touchdowns per season.

Just like we are doing for CeeDee Lamb and Amari Cooper, we need to cut Elliott a break for his post-Dak Prescott season. He has top-three RB upside but can get selected in the back-half of the first round of fantasy drafts.

Players in the first-round conversation

So far, we have labeled eight players that are first-round draft picks. Here is where the debate begins for the final two to four picks. Depending on the format (0.5 or PPR), guys could have significant swings in ADP and value. Furthermore, players that were once locked-in first-round picks are now questionable at that draft capital due to injuries or changes in the depth charts. Additionally, there are players projecting to take significant leaps in value as the season goes on.

Over the last two seasons, Aaron Jones has finished as the RB2 and RB5 while averaging 19.2 ppg (30 games). He’s finished as an RB1 in 43% of his games and as an RB2 or better in 76% of contests played. AJ Dillon could steal some red-zone touches and third-down work but not enough to drop Jones outside Round 1 conversations.

You won’t find a bigger Jonathan Taylor fan than me. When the Colts stopped messing around and turned Taylor loose, we got to see how truly special he is. Last season, in Weeks 13-17, he was the RB1 in fantasy with 125.3 points, racking up 651 rushing yards and 8 total touchdowns.

The question comes down to whether or not Taylor can see the same workload for an entire season. Nyheim Hines is still in town, and the Colts brought back Marlon Mack, who could also cut into Taylor’s opportunities. I have Taylor projected for over 1,400 total yards with 13 touchdowns. Needless to say, I’m not worried.

Nick Chubb is an outlier in fantasy football. Outside of Henry, he is the only RB that can have first-round value without being involved in the passing game. He pulls this off by being arguably the best pure rusher in the NFL.

Now, imagine Chubb lucks into 30 receptions — less than 2 per game. If that happens, he’s essentially a lock to finish inside the top-five RBs in fantasy football and be a massive steal in first rounds.

For this entire offseason, I have called Austin Ekeler the best second-round pick you can make in fantasy football. Since then, his ADP has continued to rise (13.0), and he is now a borderline first-round pick.

The Chargers are one of the most improved teams in the NFL, and Ekeler is one of the best pass catchers out of the backfield. Since 2019, he is second in targets (173) despite missing seven games last season (hamstring). Throw in new offensive coordinator Joe Lombardi, who comes from the Saints’ system, and Ekeler is primed to explode in 2021 in a Kamara-type role for the Chargers.

There are zero questions about Saquon Barkley‘s talent. As a rookie, Barkley was the RB2 with over 2,000 total yards and 15 touchdowns. In his second season, he had over 1,400 yards, despite being limited to 13 games.

But Barkley is coming off a torn ACL suffered in Week 2, and there are concerns that he could be limited when he comes back to the field. He has yet to take any hits this offseason, and when you select a guy in the first round, you need them to be available.

I will not fault anyone who takes Barkley as a first-round pick in fantasy drafts this season, but his recovery — along with questions with the Giants — has me tending to shy away from him inside the first 12 picks.

If you are in a PPR league, Calvin Ridley needs to be on the shortlist of receivers who could be first-round picks in 2021 fantasy football drafts. With Julio Jones out of town, Ridley is set to explode.