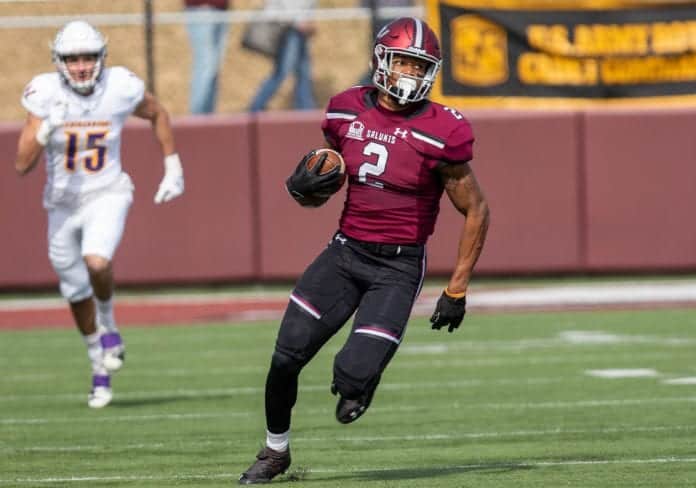 Pro Football Network's Andrew DiCecco unveils his final 2020 NFL mock draft, in which Miami picks their franchise quarterback, and a sleeper enters Round 1!

We are merely days away from the NFL Draft, and to some degree, there is less certainty than a month ago, with smoke beginning to build as teams prepare to make their move to secure their prospects of choice. Several things could change the landscape between now and next Thursday, but for now, we’re left running through the possibilities. I’m Andrew DiCecco, and this is my final 2020 NFL Mock Draft.

Cincinnati ends the suspense and secures their quarterback of the future to kick off the first round.

Chase Young, my top overall prospect in this class, adds to a loaded Washington defensive line that already boasts Daron Payne, Jonathan Allen, and Matt Ioannidis. This move earns them consideration for the top defensive line in football.

As if facing off against the likes of Davante Adams, Adam Thielen, and Allen Robinson twice a year isn’t daunting enough, the historically leaky Lions secondary sent top cover man Darius Slay to Philadelphia last month. With 2019 fifth-rounder Amani Oruwariye, a lengthy, albeit raw young talent, expected to start on one side, the Lions must fortify the position by taking the top cornerback in the draft.

My favorite prospect in the 2020 NFL Draft would be an ideal fit for any defense, especially a maligned Giants unit with glaring deficiencies at each level. Simmons, a versatile chess piece, can impact a game in a multitude of ways, and is a potential Defensive Rookie of the Year candidate.

A mild surprise here, as Miami bypasses Tua Tagovailoa and chooses the strong-armed signal caller from Oregon. Justin Herbert doesn’t share the same durability concerns and possesses every bit of upside, and while Tagovailoa is my top-rated quarterback prospect, selecting him in the top-five is a considerable risk when factoring the medical red flags.

Tua Tagovailoa’s draft day skid doesn’t last long in this scenario, as the Chargers anoint the Alabama passer to be Philip Rivers’ successor.

Derrick Brown, the top interior defender, is the perfect blend of size, athleticsm, and play strength. The Auburn standout plays with solid leverage and has the power to push the pocket. His ability to effectively play the run and the pass makes him the ideal three-down defensive lineman.

Arizona has surrounded Kyler Murray with plenty of firepower, and now add the draft’s premier tackle to protect last year’s first-round investment. Mekhi Becton has immense upside and has yet to scratch the surface of how good he can be.

Absent their two starting cornerbacks from a season ago, the Jaguars pounce on Florida standout C.J. Henderson, who should instantly nail down a spot on the outside. Henderson is a lengthy match-and-mirror cornerback who is a phenomenal athlete and arguably the best pure cover man in this class.

A star-studded Browns offense often stalled in 2019, due in large part to inconsistent play in the trenches. Wills, a supremely versatile offensive lineman, is a plug-and-play prospect, and adding him is the first step to ensuring that the offensive line won’t be what hinders the Browns in 2020.

With Robby Anderson now in Carolina, the Jets are in dire need of perimeter playmakers. Jamison Crowder has been an excellent addition in the slot, but Lamb gives the offense an entirely different dimension — which will alleviate pressure from workhorse Le’Veon Bell and allow Sam Darnold to take the next step in his young career.

The Raiders sorely lack a player that can stretch the field. Outside of Tyrell Williams, the cupboard is bare in terms of a vertical threat. Free agent addition Nelson Agholor will likely be used on the outside with the Raiders after seeing the bulk of his success in the slot with the Eagles, but the need for a primary receiving option is evident. Jeudy, an elite separator, effectively builds even more anticipation for the inaugural season in Las Vegas.

A convincing argument could be made for taking Javon Kinlaw here, but the prospects of coming away with electrifying Alabama receiver Henry Ruggs III will likely be too tempting to pass on. The 49ers add a game-breaking deep threat to complement George Kittle and Deebo Samuel.

The Buccaneers provide Brady with protection, selecting one of the top tackles in this loaded class. Tristan Wirfs, a terrific athlete and fluid mover in space, is a technically sound blocker that can step in and play from Day 1.

The Broncos don’t get their speed receiver here, but they do come away with an NFL-ready offensive tackle to protect Drew Lock for the next decade. Andrew Thomas, a three-year starter at Georgia, has extensive experience facing a vast array of pass rushers in the SEC, and a plays with a strong base, heavy hands, and a mean streak.

The Falcons add what some believe to be the top defensive tackle in the draft in Javon Kinlaw. The South Carolina product boasts superhuman strength, a lightning quick first-step off the ball, and violent hands. Kinlaw will be an instant producer opposite Grady Jarrett.