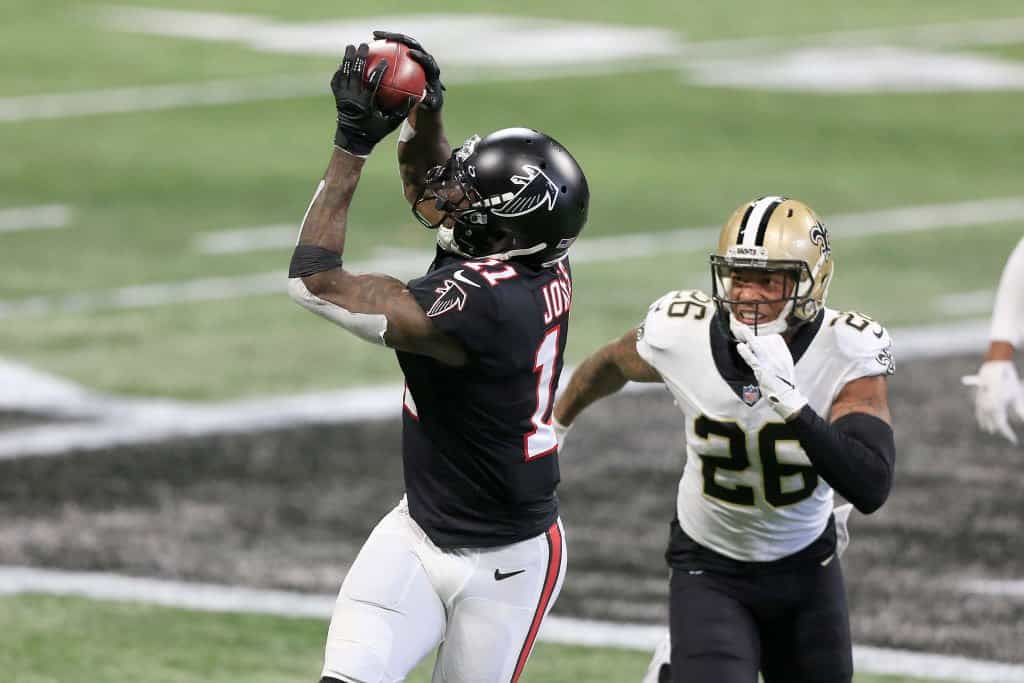 You want to ensure you have the most current injury information for your fantasy football roster as we reach the championship games in most fantasy football leagues. Make the proper adjustments with our Week 16 fantasy WR injury report and the concurrent updates throughout the week. Fantasy managers could be without wide receivers such as Julio Jones, DeVante Parker, Stefon Diggs, Kenny Golladay, and Hunter Renfrow in Week 16.

Keeping your fantasy football team up to date is crucial for success during the fantasy football playoffs and championship games. Some of the most notable pass-catchers on the fantasy WR injury update for Week 16 include Julio Jones and DeVante Parker, so we’re talking about major point swings hanging in the balance. That’s a lot of potential points that could sway what happens in your playoff or championship game.

Below is information regarding our Week 16 fantasy injury report and status, along with additional wide receivers around the league — those of which are sorted by conference.

The Atlanta Falcons could be without their star receiver for the last two regular-season games. Julio Jones missed Week 15 with a hamstring injury and received treatment. Ian Rapoport of NFL Network reported that Jones received a platelet-rich plasma injection for the injury. The hope is for the injection to speed up the recovery process for the veteran wide receiver.

Jones’ presence on the field has been missed, as the offense seems to struggle to find their stride without him. However, if the treatment works, the Falcons may get their star player back on the field for Week 16. There is still hope for fantasy managers that need that boost from Julio Jones during their championship matchups.

DeVante Parker is questionable for Week 16

Parker has had a couple of good outings this season but has mostly been quiet for fantasy managers. The former first-round selection has scored four times this year and has less than 700 receiving yards going into the final two weeks of the season. DeVante Parker’s play this season may drive his value down for next season, especially if he cannot play in the next two weeks.

Stefon Diggs is likely to play in Week 16

The Buffalo Bills had quite the scare during their Week 15 blowout of the Denver Broncos. Their star receiver, Stefon Diggs, left the game late due to a foot injury. Diggs had a stellar game against Denver, catching 11 passes for 147 receiving yards.

While Diggs’ injury was concerning for the Bills, it shouldn’t force him to miss any time. He’s likely to play in Week 16. Diggs has been a reliable option for fantasy managers this season. He remains near the top of the league’s receiving list in his first season with Buffalo. Diggs has three straight games of 10 or more catches, making him a great option in championship matchups.

Kenny Golladay is doubtful and likely out for Week 16

Having missed every game since before Thanksgiving, Lions’ WR Kenny Golladay’s Week 16 remains highly in doubt. Golladay has been attempting to return but has been unable to get back to form.

For fantasy managers, Golladay has been a bit of a letdown. After staying relatively healthy in 2019, Golladay has only played in five games for Detroit this season. With Golladay’s status up in the air, it’s time for managers to move on from him and look to other options if they haven’t already. It is unlikely that Golladay suits up for the Lions again this season.

Hunter Renfrow’s Week 16 is questionable due to a concussion

The Raiders may be without one of their most reliable receiving options for Week 16. Wide receiver Hunter Renfrow suffered a concussion in the Raiders’ Week 15 loss to the Los Angeles Chargers. The concussion occurred during a punt return when Renfrow took a punishing blow to the head.

While Renfrow’s status for Week 16 is in question, there is still a possibility that the second-year receiver plays. The Raiders face off against the Dolphins in Week 16 and the Broncos in Week 17.

Let’s dive into the AFC portion of the wide receivers you want to have on your fantasy radar. Stay up to date with our fantasy WR injury report for Week 16 to keep your fantasy roster fresh right up to kickoff.

Bills WR John Brown has yet to be activated from the injured list due to an ankle injury. Likely, the Bills won’t remove him from the list until the playoffs. They will need Brown healthy for their playoff run.

The Colts were without receiver Marcus Johnson for the remainder of their Week 15 game due to a quadriceps injury. He is questionable for Week 16.

Jaguars WR Collin Johnson left the game in Week 15 due to a hamstring injury. He is questionable for Week 16.

The Dolphins were without DeVante Parker and fellow receiver Jakeem Grant for Week 15 due to a hamstring injury. Grant is questionable for Week 16.

Jets WR Jeff Smith left Week 15 due to a shoulder injury and did not return. He remains questionable for Week 16.

The Titans placed receiver Kalif Raymond on the reserve list on Saturday. He may miss Week 16 but could be activated before the game.

Let’s dive into the NFC portion of the wide receivers you want to have on your fantasy radar. Stay up to date with our fantasy WR injury report for Week 16 to keep your fantasy roster fresh right up to kickoff.

The Cardinals held receiver Andy Isabella out of Week 15, despite being healthy. His status for Week 16 is questionable.

The Cowboys lost receiver Michael Gallup in Week 15 due to a strained hip. Gallup remains questionable for Week 16.

The Saints placed receiver Deonte Harris on injured reserve due to a neck injury.

Eagles WR Jalen Reagor left the Week 15 contest due to an ankle injury. Reagor will likely be questionable for Week 16.

Eagles WR J.J. Arcega-Whiteside was inactive for the team’s Week 15 game and may not see the field in Week 16.