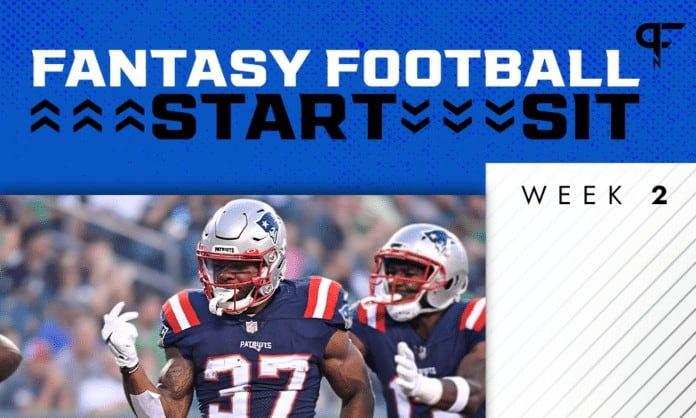 Now that the NFL is back and fantasy football lineups are being set, who makes the list of the top start/sit options for Week 2?

After months of waiting, the NFL finally made its return, which also means it’s time to overreact to what we saw on the field and how it related to fantasy football. With not all matchups being created equal, here are our top start/sit plays for Week 2 of fantasy football.

As the season kicks off, which QBs are must-starts and who should ride the pine in Week 2?

Even with Odell Beckham Jr. ruled out, I love Mayfield in Week 2, and he is one of my favorite streaming options to start. While his point total in Week 1 was nothing to write home about (13.6), Mayfield was slinging the ball around against a solid Chiefs defense. He threw for 321 yards while completing 75% of his attempts as his offense hung 29 points on the back-to-back AFC champs.

In Week 2, the Browns take on the Houston Texans, which should tell you all you need to know about how this game will go. Mayfield is a low-end QB1/high-end QB2 in Week 2 and leads my list of starts at QB.

I can only imagine how delighted Rams fans are right now. You go from Jared Goff, who was serviceable, to Stafford. And in his very first game, he lives up to all of the expectations. He brought a vertical threat to an offense that drastically needed one. On passes of 10+ yards, he was 7/9 for 212 yards with 3 touchdowns and a perfect passer rating (158.3). On play-action, which people wondered how effective it would be this year with the Rams’ scheme, Stafford was 8/8 for 155 yards and 2 touchdowns.

The Rams take on the Colts in Week 2 after Russell Wilson just carved them up. Stafford is a solid start as a QB1.

Statistically, Goff was great in Week 1. He completed 66.7% of his passes for 338 yards with 3 TDs and 1 INT. But we all know better than to take box scores at face value. The Lions were down 38-10 halfway in the third quarter and spent the next 25 minutes playing backyard football. Up until that point, the Lions had just 165 total yards of offense.

WR Tyrell Williams is unlikely to suit up in Week 2 (concussion), and the Lions are taking on an angry Green Bay Packers that allowed 11 passing touchdowns in total last season and the fifth-fewest fantasy points per game (16.1). Lightning won’t strike twice. Goff needs to remain on benches for Week 2.

While these RBs found themselves with adjusted roles in the preseason following injuries to surrounding players, they are on opposite sides of start/sit debates for Week 2.

Although Javonte Williams out-carried him (14 to 11), Gordon had 101 rushing yards on the day, which he capped off with a 70-yard scamper late in the fourth quarter. He also led the backfield in targets (3), hauling in all 3 for 17 yards. It’s worth noting that a bulk of Williams’ carries came when the Broncos were chewing the clock. This will remain a 50/50 split, but I don’t think that matters in Week 2.

The Broncos take on a Jaguars defense that struggled to contain 31-year-old Mark Ingram (85 yards and 1 TD). The Jags were 30th against RBs last season (30.1) and just allowed the third-highest total to RBs (36.4) this weekend. Gordon is a solid low-end RB2 this week, with Williams coming in as a flex. Both can be started in Week 2.

For once, we actually have a solid idea what the Patriots will do at RB. I’m sure I just jinxed it, but I will roll with it and deal with the hate on Monday.

Although he played in 53% of the offensive snaps, Harris saw an impressive 23 carries in Week 1, recording 100 yards, adding 2 receptions for 17 yards. While his fumble was costly, the fact Rhamondre Stevenson had one might balance things out and keep both out of the doghouse. When the Patriots plan on running the ball, which is often, it’s going in the hands of Harris. They take on the New York Jets in Week 2, and Harris should be treated as a solid RB2.

I have been talking about Williams all offseason but I was not expecting a top-four performance out of the gates. Williams had a huge day in Week 1, rushing 9 times for 54 yards with 1 touchdown while catching 8 of his 9 targets for 56 yards. In PPR, that’s 25 points, just 0.6 points ahead of teammate D’Andre Swift.

Williams has 200-touch upside, as I have reiterated this offseason. Now, I am not expecting to see a repeat performance in Week 2, but he is a start in a revenge game against the Green Bay Packers. Honestly, you should start him in fantasy football for this soundbite alone.

After one week, we didn’t gain much clarity on what Davis will be for fantasy managers this year.

Davis totaled just 72 yards on 18 touches in Week 1 against the Eagles, finishing as the RB30 on the week (10.2 points). Still, it’s worth noting the Eagles jumping out ahead early on likely led to a change in the game plan.

If they thought the Eagles got out fast, what do they think the Tampa Bay Buccaneers are going to do to them in Week 2?

The Buccaneers allowed only 47 rushing yards to Ezekiel Elliott and Tony Pollard (both of whom are more talented than Davis). Stay far away from Davis in Week 2. He is a very low-end RB3 at best for Week 2 and on my sit list for fantasy football.

On Friday, it was announced that Josh Jacobs (toe/ankle) was ruled out for Week 2 and that Kenyan Drake will take over RB duties. After all, they signed Drake to a two-year deal worth up to $14.5 million, with $11 million guaranteed for this reason. Well, here’s the thing, head coach Jon Gruden had an interesting comment after the announcement.

In Week 1, Drake had 6 rushes for 11 yards and caught all 5 targets for 59 yards. The organization decimated the offensive line in the offseason and was hit by injuries on Monday Night Football. The Raiders take on a Pittsburgh Steelers defense that ranked No. 2 vs. RBs in 2020 (18.7 points) and gave up 84 total yards to the Bills’ RBs last week. I am staying clear of this mess in Week 2 and keeping Drake on my bench to avoid the headache.