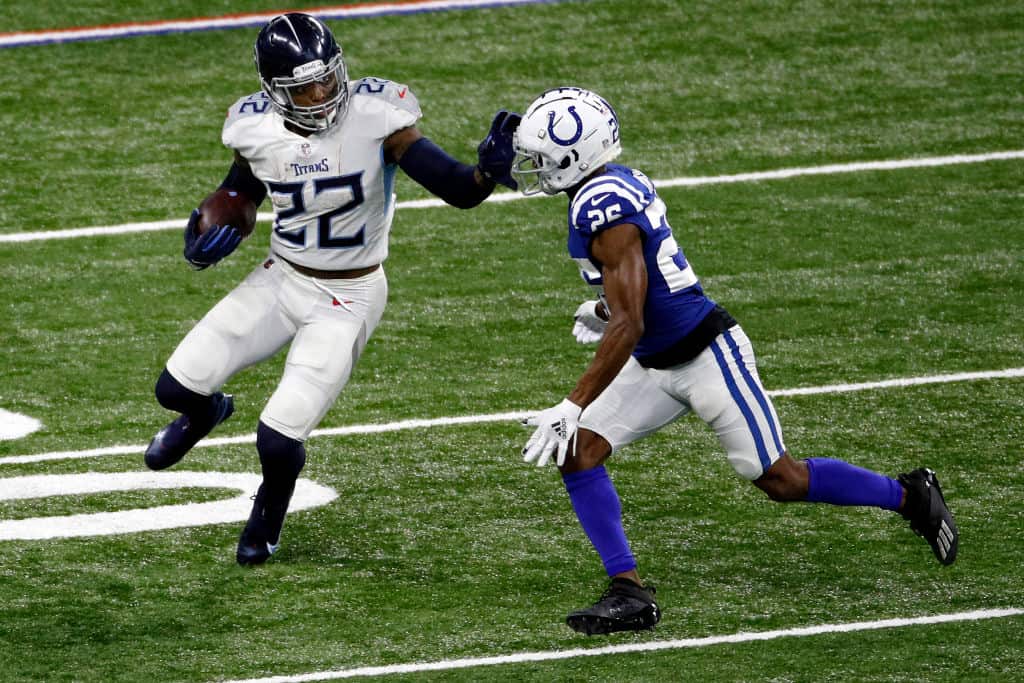 INDIANAPOLIS, INDIANA - NOVEMBER 29: Derrick Henry #22 of the Tennessee Titans carries the ball against Rock Ya-Sin #26 of the Indianapolis Colts during their game at Lucas Oil Stadium on November 29, 2020 in Indianapolis, Indiana. (Photo by Michael Hickey/Getty Images)
What's in this article? Click to show
What to keep in mind heading into Week 14 and searching for the best fantasy football running back
Derrick Henry tops the top-five fantasy RB rankings
D’Andre Swift rounds out tier 1 RB rankings
Want more fantasy football analysis and news?

It’s been a tough year for fantasy football with injuries to superstars from the minute the league resumed, but If you’re reading this, you’ve hopefully weathered the storm – and then weathered the storm after that – and made it to the fantasy playoffs. Making it this far was the easy bit, though, so take a look at our Week 14 fantasy RB rankings, looking at the must starts, the sleepers, and the busts who you should know as you attempt to get one step closer to a championship.

Week 13 brought with it the last bye week of the season, so you can relax heading into Week 14, knowing that you have all of the healthy players at your disposal to choose from.

There is a handful of star running backs looking to return from injury who have made their way onto our rankings. Headlining the list is Christian McCaffrey, and if you’ve managed to make the playoffs without your top pick, then you deserve credit and will hopefully benefit from his return. D’Andre Swift and Joe Mixon could also return this week after extended absences and have been ranked accordingly. RB busts at this stage of the season can be the difference between success and failure, though, so make sure to keep checking back, and we will provide updates once we know who is going to be active.

Derrick Henry is coming off an unproductive game by his incredibly high standards, but he gets a Jaguars team in Week 14 who have struggled against running backs all season. The Jaguars have hung around in games this season, despite their 1-11 record, but the game script will likely be in Henry’s favor, and he should see plenty of touches against a team who just gave up 179 yards from scrimmage to Dalvin Cook.

Aaron Jones had his second-highest yardage game of the season against the Philadelphia Eagles in Week 13, and his reward is a Detroit Lions defense, which gives up the most fantasy points in the NFL to running backs. He had 236 scrimmage yards and three touchdowns when the two teams played in Week 2 and should have another big day. With 5.2 yards per carry this season, fantasy managers will be hoping he gets more rushing opportunities.

The potential return of McCaffrey

We seem to have been waiting forever for the return of McCaffrey, but he’s trending in the right direction, coming off a bye week. If he does play, then he’ll slot right back into the role that saw him become the consensus top pick in fantasy drafts this summer.

Dalvin Cook is normally a top-three lock but lands just outside as he faces a tough Buccaneers run defense, allowing the fewest rushing yards in the league. They’re allowing an average of six receptions per game to the position, which will help Cook accumulate fantasy points, and it shows just how impressive Cook has been that he is still considered a top-five play.

It finally happened in Jacksonville. Dare Ogunbowale became the first Jaguars running back to have a rushing attempt since Chris Thompson in Week 9. James Robinson is the definition of a workhorse, getting the ball all game every game, no matter the score. The Titans run defense shouldn’t be feared, and Robinson’s volume makes it difficult to keep him out of the top five.

Chris Carson has only hit 100 yards from scrimmage twice this season, but he should see plenty of volume in a game against the New York Jets that the Seahawks should dominate. The Jets will be playing under a new defensive coordinator following Gregg Williams’s sacking, but the Seahawks, despite a Week 13 blip against the Giants, should be too good. Carson has eight touchdowns in eight games this season, and fantasy managers will be hoping he can find the end zone again.

Austin Ekeler had an underwhelming Week 13, but it was difficult to take too much from it given the fact that his Chargers were on the wrong side of a 45-0 scoreline. He gets the opportunity to put it right against a Falcons team who have been better defensively since head coach Dan Quinn’s departure. Ekeler’s receiving ability provides a good flood, though, and he should put up good numbers.

Alvin Kamara caught two passes in Week 13. That might sound unremarkable for a running back who is as dangerous out of the backfield as he is, but it’s his most since Taysom Hill became the starting QB. Hill’s fondness for running in the red zone and his disapproval of checkdowns puts a ceiling on Kamara’s potential, but the talent is difficult to ignore.

Nick Chubb had a disappointing Week 13 and still managed to finish as the RB10, which is a testament to how good he has been this season. He gets a tough matchup against the Baltimore Ravens, who have done a great job limiting opposing running backs, but he’s a huge part of the game plan for an offense, which is one of the hottest in football.

The last time we saw D’Andre Swift, he put up 149 scrimmage yards and a touchdown against a Washington Football Team defense which has shut down the majority of running backs they’ve faced. Since that point, the Lions have struggled to move the ball on the ground, and they’ll be delighted to welcome Swift back if he is able to return from a concussion. Adrian Peterson could handle the goal-line work, but the Lions should be playing from behind against the Packers, who have struggled to contain RBs.