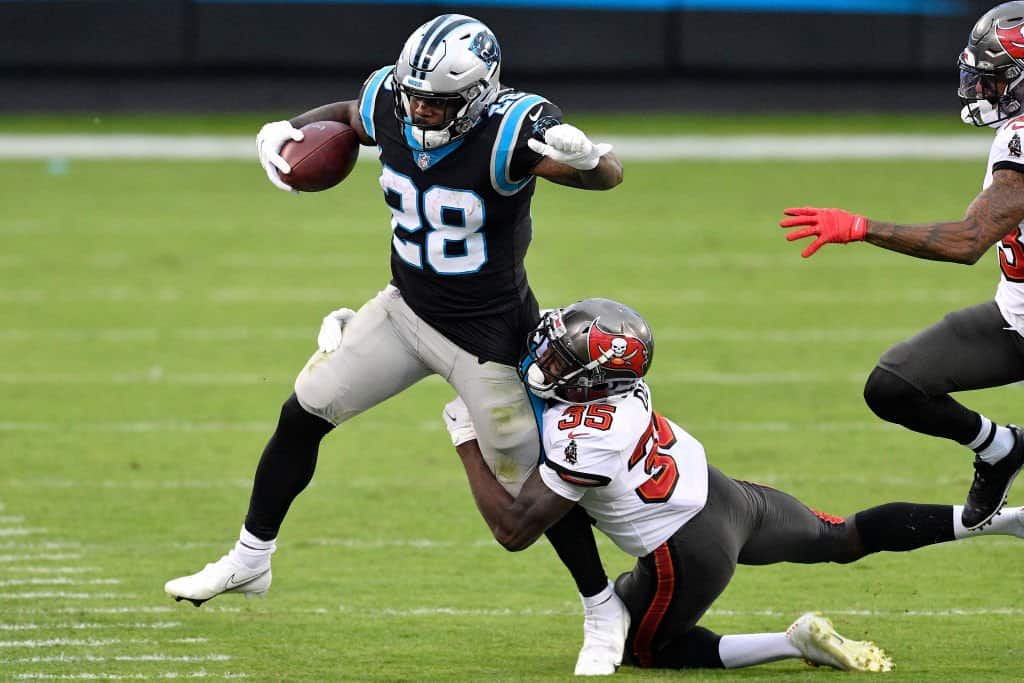 If you haven’t already had your fantasy football championship yet, it has to be going down in Week 17. As a result, we all need to follow our Week 17 fantasy RB injury update closely. Key players like Mike Davis and Antonio Gibson have their statuses up in the air and could determine your team’s future. Let’s dive into the RB injuries to consider for Week 17.

In Week 16, James Robinson was inactive somewhat surprisingly. That decision might have been influenced by the Jacksonville Jaguars’ desire to lockup the number one overall pick. Now that they have that pick in the bag, they might be more inclined to bring back James Robinson. Bringing him back also depends on the status of his injury though.

What is James Robinson’s status for Week 17?

Before their game with the Chicago Bears, head coach Doug Marrone said he would rest Robinson during practice that week. The plan was that a week of rest from practice would allow Robinson to be ready for the matchup with Chicago. Unfortunately, however, that wasn’t the case, and Jacksonville was left without their best offensive weapon.

As a result, the Bears trounced the Jaguars, solidifying Jacksonville’s hold on this year’s top pick. Backup running back Dare Ogunbowale filled in for Robinson and did a fine job. He averaged more than five yards per carry and gained 71 yards in the blowout loss. He was nowhere near as effective as Robinson through the air though, gaining just seven yards on five targets.

Now that Trevor Lawrence has fallen into their laps, there’s no incentive for Jacksonville to lose games. So, as long as Robinson is healthy, he should play in the season’s final week. The problem is, he isn’t healthy yet. He was a non-participant in practice this week as well, and Marrone told the media he likely won’t play.

“I was holding out hope, I really was, but it doesn’t look like he’s gonna be up for our game,” Marrone said. “I think it’s safe to say that he’ll be out.”

Some of that motivation to try and get Robinson on the field may have come from the fact that Robinson is just 35 yards short of the single-season rushing record for a rookie undrafted free agent.

Will Cam Akers or Darrell Henderson get off the fantasy RB injury update in Week 17?

The Los Angeles Rams are entering the playoffs limping like a wounded animal. They’re coming off of bad losses to the New York Jets and Seattle Seahawks, which made them lose the NFC West. Now two of their most important players — Cam Akers and Darrell Henderson — are nursing ankle injuries.

In their loss to the Jets, Akers suffered a high-ankle sprain and was forced to miss the team’s game against the Seahawks. He could make his return this week, even though he hasn’t been a full participant in practice yet.

On Thursday, head coach Sean McVay said he wasn’t ready to rule Akers out for Sunday’s game. He even said that he wouldn’t have a problem playing the young RB without practice time.

“I do trust the way that he’s preparing, and I know [RB coach] Thomas [Brown] is meeting with him and getting some above-the-neck mental reps,” McVay said. “So you’d like to be able to get him some physical reps, but I think the approach that we’ll take this week will be use every moment that we have leading up to game time to make sure that you get him as healthy as possible and let’s not put him at risk for any potential setbacks.”

Ian Rapoport reported Sunday morning that Akers is a game-time decision. His status will be determined by a pregame workout.

To make matters worse, in their Week 16 loss to Seattle, Darrell Henderson sustained a high-ankle sprain too. Henderson had finally sprung a run free before spraining an ankle on Jamal Adams’ touchdown-saving tackle.

Henderson’s sprained ankle must be more severe, as the Rams immediately placed him on injured reserve. He won’t be able to return from that designation until the NFC Championship Game at the earliest.

Will Ronald Jones be active in Week 17?

January 3: Ronald Jones is active for the Buccaneers Week 17 matchup.

The last few weeks have been rough on Ronald Jones. First, the Pro Bowl voters surprisingly snubbed him. Then, he was placed on the team’s reserve list and missed Tampa’s games in Week 15 and 16.

Jones might be off the fantasy RB injury update for Week 17 though. This week, the team removed him from the reserve list and made him a full-participant in practice. That news will relieve Bucs fans, as Jones was battling a finger injury as well.

As long as Jones remains on his current trajectory, he should be ready to go for this week’s matchup with the Atlanta Falcons. With that said, don’t be surprised if Ke’Shawn Vaughn continues to get some snaps after playing impressively in a relief role.

If Jones is unable to play this week, which would be surprising, he’d still be on track to return for Wild Card Weekend at least. That places him in a similar position to what Washington’s Antonio Gibson is going through right now.

Will the Panthers have Christian McCaffrey or Mike Davis?

As they enter the season-finale, the Carolina Panthers find themselves incredibly shallow at running back, as both Mike Davis and Christian McCaffrey are banged up.

Mike Davis hasn’t practiced a single day this week due to an ankle injury. He could play in Week 17, but the Panthers season is already over. He isn’t approaching any major milestones, so it wouldn’t make sense to rush him back. ESPN’s Adam Schefter listed Davis as one of a number of players out for Week 17.

Christian McCaffrey hoped to return this season, but it appears his optimism was misplaced. McCaffrey came off of injured reserve before Week 14 but quickly tweaked his quadricep in practice. He then missed Carolina’s Week 14 game but told ESPN’s Adam Schefter he didn’t believe his season was over. He also told Schefter he wanted to return and play again this season.

The Panthers designated McCaffrey as “out” for this week’s game though, ending his season.

If Carolina also designates Mike Davis as “out” for Sunday’s game, expect Trenton Cannon to take over.

Two weeks ago, Damien Harris missed his team’s game against the Miami Dolphins with an ankle injury. He remained on the sideline once again in Week 16, when New England played Buffalo on Monday night.

Now, it seems like he could end up missing the Patriots’ season finale as well due to that injured ankle. During this week of practice, he was a limited participant on both Wednesday and Thursday. On Friday, however, he unexpectedly did not participate in practice and New England listed him as “out” for Week 17.

That’s fairly surprising considering he practiced each day of last week, and the Patriots designated him as “questionable” in Week 16. It’s possible that with New England’s season over now, Bill Belichick decided to avoid putting more tread on Harris’ tires.

Look for James White to take the lion’s share of the carries against the Jets. Rookie J.J. Taylor could also see some snaps in the backfield.

It seems everyone has an ankle injury, from Mike Davis to Clyde Edwards-Helaire.

In the Chiefs’ marquee matchup against the New Orleans Saints, they lost Clyde Edwards-Helaire to an ankle injury. Then, soon into the following week of practice, Kansas City designated Edwards-Helaire as “out” for Week 16.

Fortunately for Kansas City, his x-rays returned as negative. So he should be able to return at some point in the playoffs at the very least. The Chiefs have clinched the AFC’s top seed, so it might make sense to give Edwards-Helaire another week of rest before the playoffs.

That seems to be Kansas City’s plan, as Edwards-Helaire did not participate in practice any day this week. The Chiefs have already designated him as “out” for Sunday’s game.

This week has a different wrinkle from Week 16 though. The Chiefs have designated Le’Veon Bell as “questionable” with a knee injury, and he only participated in one day of practice. If Bell doesn’t play, it will be on Darrel Williams and Darwin Thompson to carry Kansas City’s ground game.

Ian Rapoport reported Sunday morning that if Le’Veon Bell is active, he will play “very little”.

Washington’s star running back, Antonio Gibson, is currently battling a toe injury. He sustained the injury in Week 13 against the Pittsburgh Steelers, but Gibson was able to return last week. Oddly enough though, Washington has held him out of practice each day this week.

Washington has listed Antonio Gibson as “questionable” for Sunday’s game. They need him back this week. They can clinch a playoff berth with a win and can be eliminated with a loss. With the playoffs on the horizon though, it’s also possible that Washington is resting him just to make sure he will be ready. Ian Rapoport reported Sunday morning that Gibson is expected to be available.

If Antonio Gibson doesn’t play, J.D. McKissic will fill in.