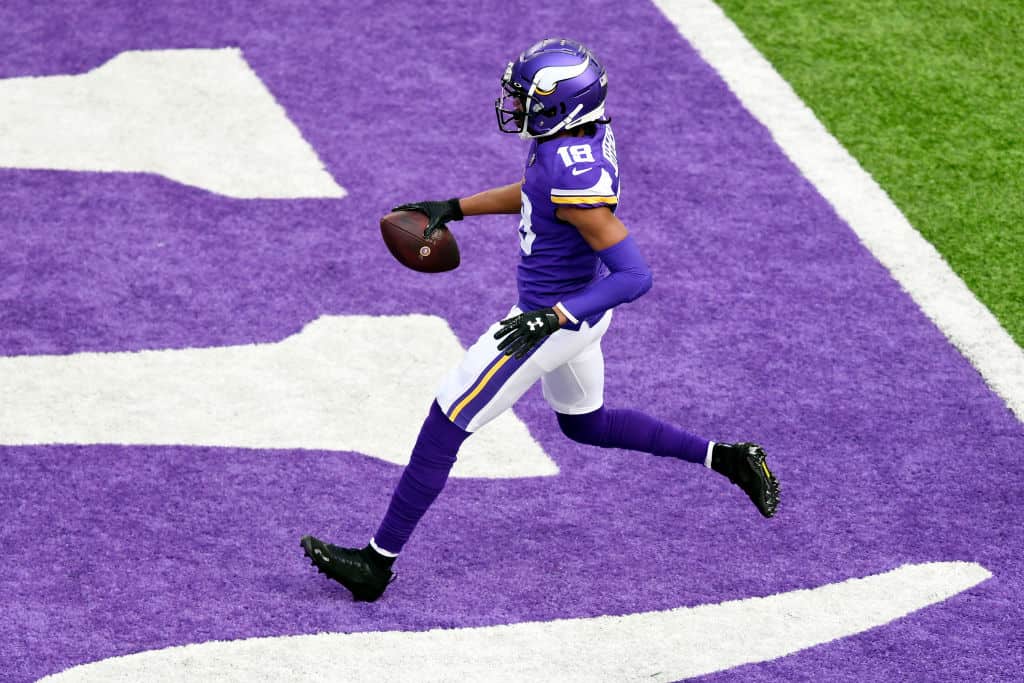 It’s Week 14, which means it is time to pour over the top fantasy football players for this week as we have reached the first round of the playoffs. With a win or go home mentality, you need to get your preparation done to decide who you should start or who rides the pine. If you’re looking to get an edge over the competition, look no further than our PPR Fantasy Football Week 14 Rankings for both 1QB and Superflex leagues and see who are our top players for this week.

Week 14 Top Plays of the Week

Do you remember when Russell Wilson was cooking? Don’t let these last few games distract you from how good he is. In three of the previous four games, Wilson has faced the Los Angeles Rams, Philadelphia Eagles, and New York Giants. While that might not sound bad on paper or record, they have one thing in common. They are solid against the QB. The Rams rank second in points allowed to the quarterback at 13.78 points per game. The Giants are sixth at 15.57, and the Eagles are 12th, giving up 17.63 per game.

Since Christmas is almost here, allow me to play Santa Claus for the week. I am sure you have been good; even if you haven’t, it’s 2020, and you get a pass. What team would you like to see Russell Wilson play against to make him one of the top fantasy players for Week 14? You know what, you got it. New York Jets coming right up.

They give up the third-passing yards per game (299.0) and a league-high completion rate. The Jets allow opponents to score 29.4 points on average against them and six quarterbacks have up 24-plus fantasy points against them. If that isn’t enough of a reason to put Wilson on the top of the fantasy rankings for Week 14, then I don’t know what is. Unless you have both Wilson and Patrick Mahomes, there is no question on who you should start with Wilson on your team.

There are a couple of options you could go with at running back in fantasy rankings for Week 14. Aaron Jones against Detroit is phenomenal. Even David Montogmery has a fantastic matchup against the Houston Texans and is coming off a week where he finished as the RB1 in PPR. However, if I am going to put my money down on any player to be one of the top fantasy players this week, I’ll take the King, Derrick Henry.

The Jaguars are 28th in fantasy points allowed (27.89) and rushing yards per game (107.91). There have been four running backs who have gone over 115 yards on their own against this defense. In an article I put out last week, I broke down some of Henry’s stats, and if history is anything to go off, this will be a huge game.

Davante Adams is currently on pace for 1,440 yards even after missing two full games and a half of another. He leads all wide receivers with 26.3 fantasy points per game. Tyreek Hill is the only other player with at least 20 at 22.9 ppg. In the 10 games he has played, Adams has been inside the top-five six times. Did I mention that he has 11 touchdowns in the last seven games?

Now, what if I told you that he takes on a Lions’ defense that gives up the fourth-most receiving yards 194.08 to WRs and is missing both of their top cornerbacks? They’ve allowed the third-most yards per target (9.28) to wide receivers this season. Adams only saw three catches for 36 yards the last time these teams played due to an injury he suffered in the first half.

Not only do I have Adams atop my WR fantasy rankings for Week 14, I think he might be the top-scoring player overall this week. I can’t think of another WR who you should start over him.

I’d love to put someone else here on this list. There are other good plays that I have ranked highly in my Week 14 rankings. But if we are talking about the locks and the top players for Week 14’s rankings this week, no one else deserves that title other than Travis Kelce as there is no one who you should start over him.

The TE1 on the season by a 48.36-point margin, Travis Kelce is the unquestioned TE1 in fantasy football right now. Even if you have Darren Waller, who is coming off a record-setting day, there is no question who you should start.

He leads all tight ends in targets (110), receptions (82), yards (1114), and touchdowns (8). With George Kittle injured, there is no other tight end in fantasy football that can hold a candle to the value of Travis Kelce and his impact on his team. I don’t know if another player is a larger lock when it comes to his position against the rest of his contemporaries than Kelce in Week 14. As a receiver, Travis Kelce would be the WR3 in PPR, 12.62 points ahead of Seattle Seahawks WR DK Metcalf.

These fantasy football rankings for Week 14 were last updated on December 10th, 2020, at 8:00 PM ET. Below, you can sort our PPR Fantasy Football Week 14 Rankings by league type (1QB or Superflex), position, scoring format, and rank. Mobile users: Please note that the rankings are best viewed in landscape mode.