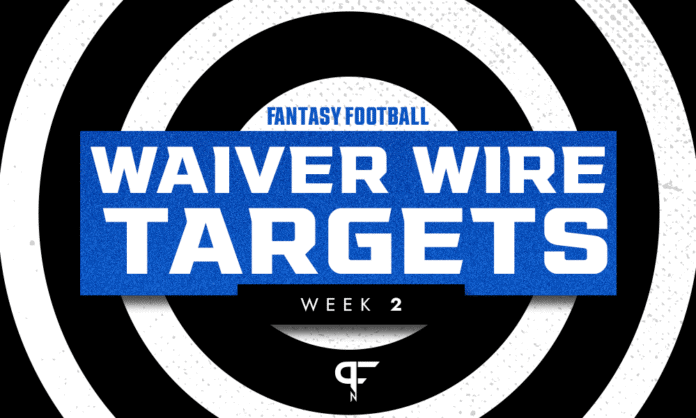 After an exciting start to the 2021 NFL season, who are the priority Week 2 waiver wire pickups to target for your fantasy football team?

Following an exciting Week 1, it’s time to improve our rosters for Week 2 by using the waiver wire. Let’s take a look at the top waiver wire pickups to target for your fantasy football team.

Here are the quarterbacks to target on the Week 2 fantasy football waiver wire.

The man who rightfully won the Broncos’ starting quarterback job completed 28 of 36 passes for 264 yards and 2 touchdowns in a Week 1 road victory over the Giants. This week, he gets a Jaguars team that just surrendered 291 yards and 2 touchdowns to Tyrod Taylor. Bridgewater is a decent streaming option in Week 2.

There are quite a few RBs you should scour the waiver wire for in Week 2.

Trey Sermon was a surprise inactive on Sunday. After the game, head coach Kyle Shanahan shed some light on the situation. Apparently, Elijah Mitchell simply outplayed Sermon in preseason and training camp. With Raheem Mostert on the shelf due to an ankle injury, Mitchell looks like the primary back. He rushed for 104 yards and a score on 19 carries in Week 1. He’s worth 10-30% of your FAAB, depending on need.

It pains me to put Mark Ingram II here after how badly I bashed him as being washed. I still think Ingram will fizzle out, but I can’t deny the usage he saw in Week 1. Ingram was the lead rusher, carrying the ball 26 times for 85 yards and a touchdown. The Texans won’t play the Jaguars every week, but that kind of volume warrants 5-10% of your FAAB if you need RB depth.

As it turns out, Justin Jackson is not the RB2 behind Austin Ekeler in Los Angeles — Jackson can be dropped everywhere. That job belongs to sixth-round rookie Larry Rountree III. He only carried the ball 8 games on Sunday, but as the primary backup to an oft-injured starter, he’s worth a stash. I wouldn’t spend more than 3-5% of my FAAB, though.

Miles Sanders is clearly the lead back in Philly, but Kenneth Gainwell — not Boston Scott — is second on the depth chart. Gainwell had 9 carries and 2 receptions on Sunday. He’s not fantasy-viable by himself, but if something were to happen to Sanders, Gainwell would be the primary beneficiary. He’s worth 5-10% of your FAAB.

Here are the wide receivers to target on the Week 2 fantasy football waiver wire.

Admittedly, Emmanuel Sanders likely isn’t available in most of your leagues. And if he is, it’s probably because your league is relatively shallow, and you have no room for him. With that being said, Sanders is the clear WR2 in Buffalo. He was targeted 8 times and was one Josh Allen overthrow away from a monster day. He looks like a viable weekly WR3. I’d throw 10-15% of your FAAB on him if you need a WR.

I definitely liked what I saw out of Rondale Moore in Week 1, but Christian Kirk is still the WR2 on this team for now. That has value. Kyler Murray lit it up and is a threat to have to the greatest fantasy season ever by a QB. Unsurprisingly, A.J. Green is dust. Kirk caught all 5 of his targets for 70 yards and 2 touchdowns. He’s worth a 5-10% bid.

With Odell Beckham Jr. still not ready to play following last season’s torn ACL, it was unclear who the WR2 would be alongside Jarvis Landry. The answer is clearly rookie Anthony Schwartz. Beckham may return this week, and Schwartz might have no value, but Beckham also could get hurt again. Schwartz is worth 3-5% of your FAAB.

Jerry Jeudy sustained a high ankle sprain on Sunday. Given how the injury looked, that’s probably the best-case scenario. Yet, as we know, high ankle sprains essentially doom a player for the entire season. Tim Patrick was already playing ahead of Jeudy in two-receiver sets, and Hamler should’ve had a monster day had he not dropped a deep wide-open touchdown. Both are worth 3-5% of your FAAB as speculative adds.

Which tight end should you target on the waiver wire in Week 2?

Tyler Conklin was the clear primary tight end for the Vikings. He played over 80% of the snaps. Minnesota has no obvious third option in their passing game beyond Justin Jefferson and Adam Thielen. Conklin is worth 5-10% of your FAAB.

When targeting kickers to pick up on the waiver wire, we want those on favored teams, playing in good weather, and preferably at home.

The Broncos are road favorites in the lovely, warm Jacksonville weather.

The Steelers are home favorites against the Raiders, and it’s not cold yet in Pittsburgh.

The Packers put on a pitiful Week 1 performance, but they should fare much better at home against the lowly Lions.

Here are the defenses to target on the Week 2 fantasy football waiver wire.

The Cardinals were ferocious against the Titans in Week 1. They recorded 6 sacks and recovered 2 forced fumbles. Their pass rush looks legit. Next week, they have a home date with the Vikings and are a nice waiver wire pickup to stream.

The Bears play the Bengals in Chicago this week. The Bengals’ offense looked good last week, but a home game against the Vikings is very different than a road contest in Chicago. The Bears should have several sacks on Joe Burrow in Week 2.