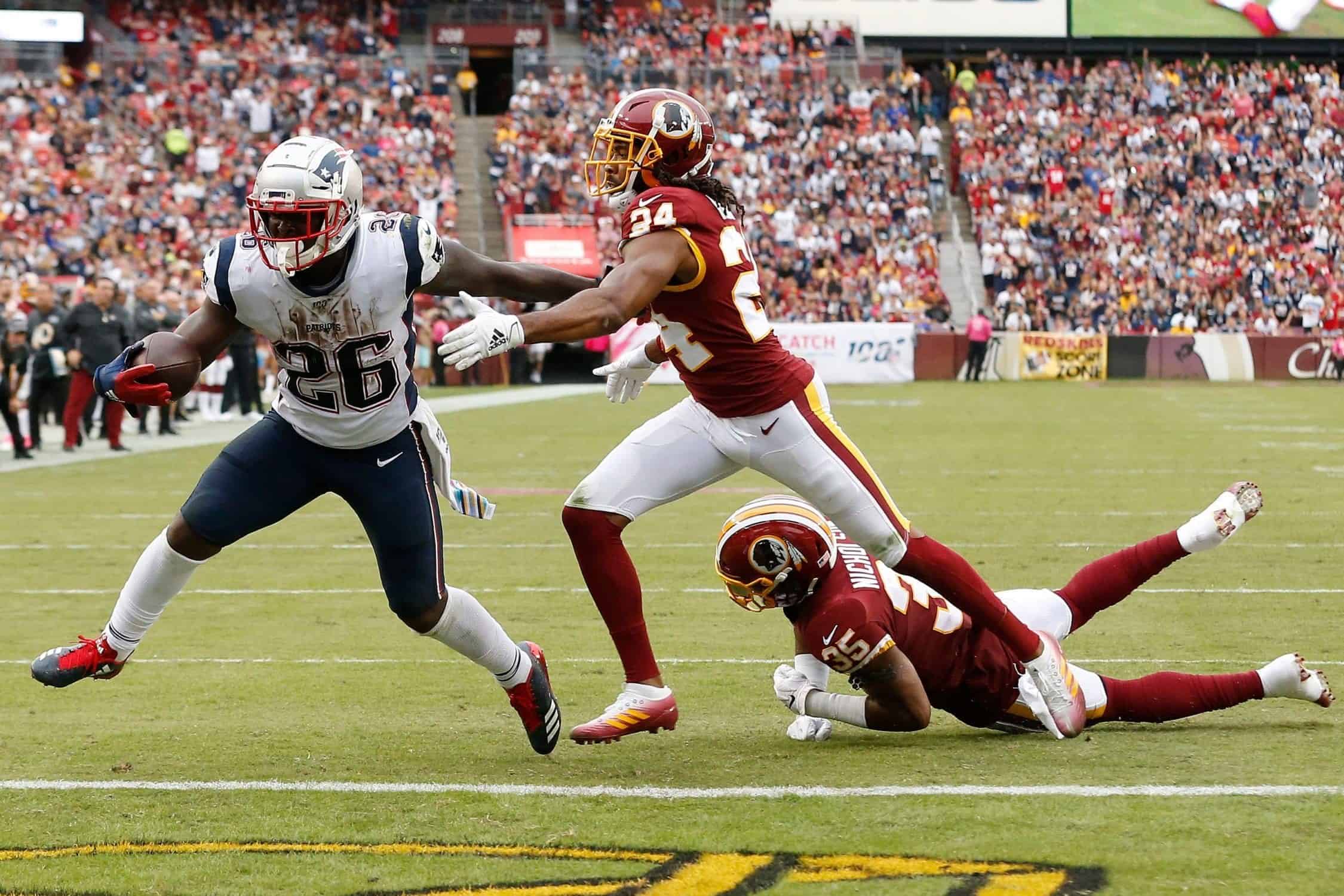 Week 7 was an emotional rollercoaster for fantasy football. Aaron Rodgers scored 6 touchdowns despite missing his best receiver. Kirk Cousins looks to have realized that throwing the ball in the direction of Stefon Diggs might work. Marvin Jones gave Xavier Rhodes nightmares – not for the first time. On the other hand, Devonta Freeman threw a punch at Aaron Donald in one of the more questionable decisions of his career, leading to an ejection. The San Francisco 49ers and Washington Redskins combined for no touchdowns. Evan Engram, going against the worst tight end defense in the league, had one catch for six yards. Rough.

But NFL Week 8 will hopefully be a little more straightforward, so make sure that you have the best chance of fantasy success with our start/sit advice!

Whew. Two weeks in a row, Jared Goff is a start. There’s no doubt that Goff has disappointed this season, currently sitting at QB18 on the season. He wasn’t perfect last week but, due mainly to the Atlanta Falcons, one of the worst defenses in the league, he was able to score 25 points and finish the week as QB5. Luckily for fantasy owners, the Bengals are also one of the worst defenses in the league, allowing the third-most points to quarterbacks this season. Bengals cornerback William Jackson is back practicing in full, but Darqueze Dennard and Dre Kirkpatrick are injury concerns. Targeting bad defenses with injuries is a recipe for success.

The New York Giants are allowing the eight-most fantasy football points to quarterbacks this season, so this is an enticing matchup for Matthew Stafford. The Giants have also allowed the third-most fantasy points to running backs, but there’s a significant question mark around the Lions rushing attack. Kerryon Johnson’s injury leaves Ty Johnson and J.D. McKissic likely to see increased workloads, and Week 8 waivers around the world were full of claims. Assuming that they’re a downgrade, Stafford could have to throw the ball more, piling up passing yards and could be in for a big day against a vulnerable passing defense.

The Buffalo Bills are quietly one of the stingiest defenses in the league. They’re allowing the third-fewest fantasy points to quarterbacks this season and have only allowed four passing touchdowns. Carson Wentz has had two games with over 300 passing yards this season and three games with fewer than 200 passing yards. The Philadelphia Eagles are 21st in pass attempts over the last three weeks, and the Bills are unlikely to score enough points to force them into a shootout.

The Broncos are middling against running backs this season, but I expect Marlon Mack to show why fantasy owners invested a high pick in him. He’s averaging over 21 touches per game this season and is going against a team that just traded one of their top wide receivers; this should reduce the effectiveness of the Broncos and see the Colts offense spending more time on the field. Mack is also a prime candidate for touchdown regression, having averaged a touchdown every 64.5 touches so far this season. As a rookie in 2017, he averaged a score every 28.5 touches, while last year, he averaged a touchdown every 21.2 touches. Assuming that the Colts are leading, he should see plenty of opportunities.

The New England Patriots backfield can be challenging to trust. James White is always going to catch passes, but they seem to use a dice to decide which running back is going to get goal-line carries, which can be frustrating for fantasy football. Rex Burkhead’s injury appears to have cleared things up a little, though, and Sony Michel has been the benefactor. Michel is averaging just under 18 touches per game and has six touchdowns in seven games this season. He’s been the RB6 over the last three weeks and is showing no signs of slowing down.

I don’t know who needs to hear this, but Joe Mixon shouldn’t be in your fantasy football lineup at the moment. He’s on pace to finish the season with 580 rushing yards and 226 receiving yards. He is yet to score a rushing touchdown. We know that Mixon is a good player, but the Bengals offensive line is a disaster, and until they can fix it, there are no gaps for Mixon to exploit. Fantasy owners will be hoping that A.J. Green’s return in the next few weeks will take some of the attention away from Mixon, but he can’t start until he’s shown you that he can produce.

Derrick Henry is facing the Bucs, and the Bucs are a dominant run defense. They’re allowing 68 rushing yards per game, the fewest in the NFL, despite one-third of their games have been against the Carolina Panthers and Christian McCaffrey. The volume is encouraging for Henry, who is the workhorse back in Tennessee, but it’s a tough situation, and he’s still averaging just one reception per game.

Tyler Lockett has shown that he’s a solid floor play so far this season, with over 50 yards in six of his seven games. Despite the fact he’s currently the WR9 in standard scoring, he hasn’t quite taken the next step that some hoped when it became clear that he’d be Russell Wilson’s top receiving option. That said, the Falcons are struggling to stop anybody at the moment. They’re giving up the third-most fantasy points to opposing wide receivers and, while D.K. Metcalf is undoubtedly capable of a few big plays, Lockett is in prime position to put up big numbers.

The Raiders are allowing the second-most fantasy points per game to opposing wide receivers. DeAndre Hopkins is the focal point of the Texans passing offense, but Will Fuller’s injury has left a significant role opposite him. Kenny Stills has shown throughout his career that he’s a big-play threat, capable of scoring long touchdowns. The Raiders just traded away starting cornerback Gareon Conley (to the team they’re facing on Sunday, strangely), meaning that rookie Trayvon Mullen is expected to get the start opposite Daryl Worley. Guarding Stills will be a tough ask, and he should be able to get open.

I know, I know. Odell Beckham Jr. is one of the best wide receivers in the league. Maybe his natural talent and volume pull through, but Beckham is about to face the toughest situation in football. He’s going to be facing Stephon Gilmore, who has arguably been the best cornerback in the NFL this season, and Bill Belichick, who loves nothing more than taking away the opposition’s best player. All while relying on Baker Mayfield, who has had one of the more disappointing seasons in recent memory after an offseason of hype. You might not be able to afford to bench him, but don’t be surprised if he’s not a top 20 fantasy football wide receiver this week.

Yes, I’m targeting the Bengals again. It’s not just because of that, though. Gerald Everett has 34 targets in his last four games and 18 catches; Brandin Cooks has 22 and 14 during that time, and Robert Woods has 35 for 23. Cooper Kupp is the primary pass catcher in Los Angeles, but Everett has become an essential part of the passing game. The Bengals have defended tight ends well so far this season, but the volume at the tight end position is hard to overlook, and you can start Everett with confidence.

Anybody watching week one would have thought that the league had itself a new star at tight end in T.J. Hockenson as he posted 131 yards and a touchdown. Unfortunately, he’s only had 88 yards and a touchdown in the five games that followed that combined. While the Giants’ defense hasn’t been great this year and are coming off a demolition at the hands of Chase Edmonds, they are allowing the fourth-fewest fantasy points per game to the tight end position, and it could be another tough game for Hockenson.

Are you looking for another player? Check out our Week 8 rankings for more information!