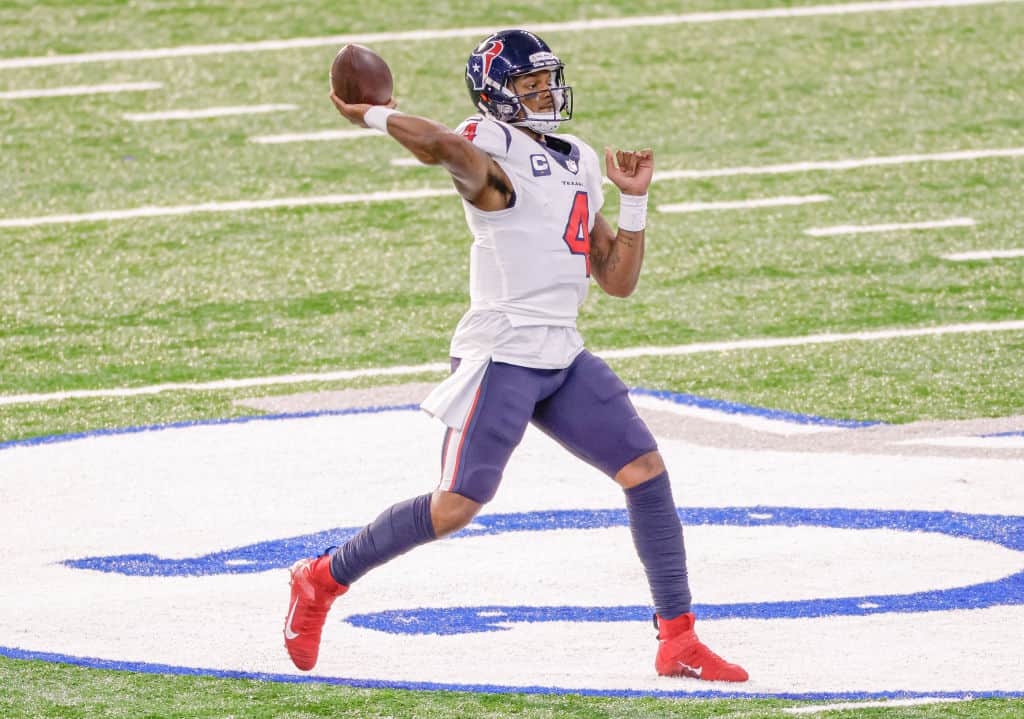 Week 17 of the fantasy football season leaves even less room for error with your start ’em sit ’em decisions. Let’s take a look at the week ahead using our Fantasy Football Consistency Score (CS) and Defensive Points Allowed Consistency Score (D-PAC). Using these metrics, we will highlight the best and worst Week 17 matchups to let you know whether you should consider the likes of Philip Rivers and Deshaun Watson as start ’em or sit ’em options.

If you would like more detailed information on how the CS and D-PAC works, please refer to the Introduction to the Fantasy Football Consistency Score. However, the premise is mostly straightforward. The higher the CS, the more consistent a player is scoring high-level fantasy points. In the case of D-PAC, the higher the number, the more consistently that team allows high-level fantasy points to the position.

Philip Rivers isn’t the same flashy Rivers of yesteryear. But if you are fielding a Week 17 fantasy football roster, he needs to be in it. With an average points per game of 15.3, it’s no surprise that Rivers has practically lived as a QB2. In 47% of games played, he’s been a QB2 and only a QB1 in 27%. But in Week 17, when seven teams have clinched, and 14 have no chance and nothing to play for, an all-time great with the playoffs on the line could win you your week. And with the 18th ranked CS (6.82), he’s unlikely to tank your championship matchup.

But it’s not just that Rivers has something to play for. He also has the best fantasy football matchup for a quarterback in Week 17. To get into the postseason, Indianapolis has to win against the Jacksonville Jaguars. The Jaguars 12.49 D-PAC score is the highest versus quarterbacks in the league. Their 22.35 average points allowed ranks third-highest. Over the past two weeks, we have seen them give up 23.6 and 29.22 points to Mitch Trubisky and Lamar Jackson, respectively.

It’s always daunting to include the second-ranked fantasy football quarterback in CS, 12.44, in my Week 17 start ’em sit ’em column as a sit. Yet, Deshaun Watson scares the heck out of me in Week 17.

First of all, the Houston Texans are eliminated and have nothing to play for. Secondly, despite what the player and Romeo Crennel said, that injury to Watson’s throwing arm at the end of Week 16 looked ugly. If Watson experiences any pain or setbacks, why would they keep him in for all four quarters with nothing to play for?

To make matters worse, Watson and the Texans host the Tennessee Titans in Week 17. The Titans are a plus matchup on paper. They host the third-highest D-PAC score, are tied for the second-most touchdown passes allowed and fifth-most passing yards allowed. But after losing to the Green Bay Packers this past week, the Titans have everything to play for. If there was ever a time for that defense to lock down and Derrick Henry to control the clock from start to finish, Week 17 is it.

Which running backs should you start/sit in fantasy football Week 17?

I listed J.D. McKissic in last week’s start ’em sit ’em column, and he finds himself here again in Week 17. After posting 19.2 fantasy points in half-point PPR formats, McKissic made a lot of managers happy in Week 16. Although, considering he is only rostered in 58% of Fleaflicker.com leagues, maybe not “a lot.” But that means this PPR stud might be available on waivers, even now!

While Antonio Gibson is back and leading the team in carries, McKissic has seemingly taken over the role of the top passing target with Terry McLaurin out. Over the past four weeks, McKissic has 34 targets. Three out of those four weeks, he was in double digits. Washington has to win to stay on top in the NFC East and make it into the playoffs. So expect them to be competitive and using their top playmakers. Right now, that means McKissic.

At this point, there is no reason to assume Christian McCaffrey is coming back in 2020. That clears the way for Mike Davis to keep tacking onto the best statistical season of his career. However, in Week 17, I wouldn’t pin my championship hopes on him.

The Carolina Panthers, who are eliminated from the postseason, welcome the New Orleans Saints on Sunday. While the Saints playoff berth is secure, they could still get a first-round bye if they win and a few other chips fall right. Expect the Saints to come out swinging.

The Saints’ defense has been a headache for fantasy running backs all year long. Their 7.07 D-PAC to the position is the lowest in the league, as is their average of 18.27 fantasy points per game allowed to the position. All year long, they have been a running back matchup to avoid. The last time these two teams met, McCaffrey was out, and Davis only scored 6.1 fantasy points.

What receivers should you start ’em/sit ’em in fantasy football for Week 17?

2020 has been a wild ride for the New York Giants. And somehow, even at 5-10, they still have playoff hopes alive. If the Giants beat the Dallas Cowboys, and the Washington Football Team loses in Sunday Night Football, the Giants are in. What makes this even more interesting is that the same can be said for the Cowboys. Even though this is a matchup between two teams with losing records, it’s actually an interesting Week 17 matchup.

Darius Slayton may have begun the season as a fantasy football darling, but Sterling Shepard is the receiver to roster in Week 17. Daniel Jones was zoned in on Shepard last week versus Baltimore. Leading the team in targets, receptions, yards, and touchdowns, Shepard showed his connection with Jones. Over the past four weeks, Shepard has out-targeted Slayton 30-26.

The Dallas Cowboys are also a forgiving matchup. They have been a staple matchup to target for fantasy football receivers in my start ’em sit ’em columns and Week 17 is no different. The Cowboys 19.57 D-PAC against receivers ranks sixth. Their 41.33 average points allowed ranks fifth. Both of these teams know, if they win and Washington loses, they have a shot at the Lombardi Trophy. Since they won’t know about Washington until the Sunday Night Football game, both teams will be going all out. That should translate to fantasy points.

In three out of the last five games, Allen Robinson has had exactly 13 targets. In those games, he averages 20.5 fantasy points — the other two, 10.4. On the season, Robinson has been a top-24 receiver in 47% of games played. Meaning he’s been a WR3 or worse in 53% of the games played. With a matchup against one of the toughest secondaries in the NFL, Robinson is profiling to be outside the top 24 once more before the season ends.

The Green Bay Packers can clinch a first-round bye if they win or tie in Week 17. This gives them something very much worth playing for. Their defense all season long has been strong against the pass but generally allows teams to run. That fits right in with the Chicago Bears’ style of play. Their fantasy football D-PAC score versus receivers of 14.14 is 27th. Meanwhile, their average fantasy points allowed of 31.85 is the third-lowest in the league. Expect a heavy dose of David Montgomery, dramatically limiting any value from Allen Robinson.

Which tight ends should you trust or be cautious of in Week 17?

Jared Cook has fallen from grace at the end of 2020. The New Orleans tight end was averaging 9.7 fantasy points per game to start the season. After becoming obsolete for many of the weeks Taysom Hill started under center, Cook killed many fantasy teams that were on the playoff bubble themselves.

Cook’s CS dropped dramatically from 3.57, ranking fifth, to 1.90, ranking 27th. But let this Week 17 start ’em sit ’em alleviate any possible lingering doubts. Over the past four weeks, Cook has averaged 8.78 fantasy points, 4.5 targets, 44 yards, and half a touchdown per game. That’s even with Hill under center for two of those.

The Saints have clinched a playoff spot. Yet, they could get a first-round bye and make sure the Super Bowl goes through New Orleans with a win in Week 17. That’s important for a Saints team with their, very likely, last shot at another Lombardi Trophy with Drew Brees in the huddle. Don’t expect them to take their foot off the gas against the Carolina Panthers because of that.

The Panthers, meanwhile, have nothing to play for other than bragging rights. And they haven’t had anything to brag about when it comes to defending tight ends. Their 14.15 average points allowed to the position ranks eighth; their D-PAC of 5.56 ranks sixth. All of the fantasy football lights are green for Cook if you play in Week 17.

When the Los Angeles Rams played the Arizona Cardinals in Week 13, Higbee snuck into double-digit fantasy points. With four receptions for only 24 yards, he’s lucky he fell into the end zone for one of those six-yard receptions. With a CS of 2.89, Higbee has the 10th-best Consistency Score at the position. But since the team’s bye week, he’s averaged only 6.71 fantasy points per game. His CS over that time drops to 2.16, which would rank 21st.

The Arizona Cardinals are outside looking in right now. But all of that can change with a win against their division foe in Week 17. So this defense is going to be extra charged up. This doesn’t bode well for Higbee as they were already difficult for tight ends. The Cardinals are ranked 24th in D-PAC, 3.91. And their average points allowed to the position of 10.81 ranks 28th.

Be sure to follow us on Twitter @PFN365 to stay up to date with all things around the NFL and the 2020 fantasy football season. Also, continue to visit Pro Football Network for NFL news and in-depth analysis while also visiting our fantasy football section for more coverage and up-to-date rankings

Did you like this piece? Disagree? Drop me a line and let me know @DumpsterDiveFF and go ahead and follow for more fantasy football nuggets & all things Consistency Score related.