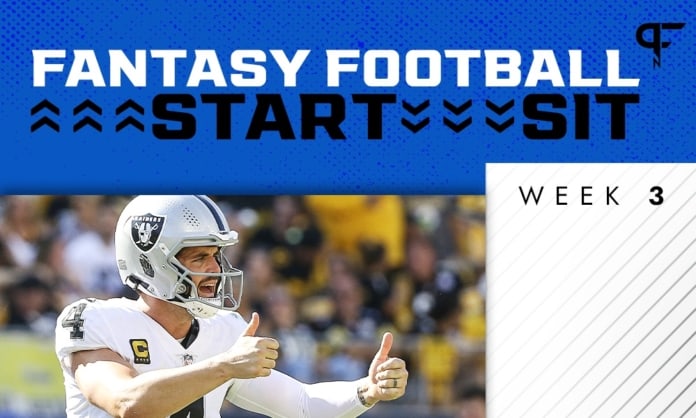 With the NFL in full swing and fantasy football lineups being set, who makes the list of the top start 'em and sit 'em options for Week 3?

After two weeks of NFL games in the bag, fantasy football managers are starting to feel that they have a solid idea of who to start and who to sit heading into Week 3. But is that accurate, or are we jumping to conclusions after only two games? With not all matchups being equal, here are our top start ’em and sit ’em plays for Week 3 of fantasy football.

Heading into their third game of the season, which QBs are must-starts, and who should remain on the bench in Week 3?

Is Carr the surprise QB of the season? I mean, if we were to vote on the MVP right now, he might be in the top five. Carr has been racking up the stats despite the team remaining non-committal on his long-term standing with the organization. Through two games, Carr has completed 62 of 93 passes for 817 yards with 4 touchdowns and 1 interception. His passing yards are not just No. 1 in the NFL, but nearly 130 yards ahead of second place (Kyler Murray – 689).

It’s not like he’s done this against cupcake competition, either. Carr has torched two of the top defenses in the NFL with the Baltimore Ravens (No. 9 vs. QBs in 2020) and the Pittsburgh Steelers (No. 2).

In Week 3, the Raiders take on the struggling Dolphins, who were just waxed by the Buffalo Bills 35-0. Should Tua Tagovailoa (ribs) miss the game and Josh Jacobs (ankle) questionable, Carr could have the ball in his hands a lot on Sunday. While not a locked-in QB1, he might be moving forward should he have another standout performance.

Someone needs to hire Matt Rhule and Joe Brady for the next Ghostbusters movie because Sam Darnold is apparently no longer seeing ghosts. The QB13 in fantasy (19 points per game) has been solid this season, surpassing the expectations of many. Completing 68.5% of his passes, Darnold has 584 yards (11th) with 3 TDs and 1 INT. He even rushed for a score in Week 1.

With a star-studded offense involving Christian McCaffrey, DJ Moore, Robby Anderson, and rookie Terrace Marshall Jr., Darnold is set to succeed in Week 3. They will take on the Houston Texans on Thursday Night Football.

For the first time in what feels like years, Darnold falls on the start ’em side of the column as a higher-end QB2.

After a 5-touchdown opening act in one of the more surprising games thus far, Winston had a significant letdown in Week 2. Winston completed 11 of 22 passes for 111 yards and 2 interceptions while rushing for 19 yards and a score on 3 carries.

While I am sure the COVID-19 breakout amongst the coaches did not help, it shows the volatility Winston brings. Even in his blowout Week 1, according to Pro Football Reference, Winston had the fewest passing yards in a 5-passing-touchdown game in NFL history. That’s not sustainable, and unfortunately, we saw the downside of this volume last week.

The Saints take on the New England Patriots in Week 3, who still have a vaunted defense and one of the brilliant minds in the game with Bill Belichick. His goal will be to eliminate Alvin Kamara from the game script, forcing Winston to beat them, something I am not sure he can do with this current WR corps. For those with him on your roster, Winston is a sit ’em for me in Week 3.

While these RBs found themselves with adjusted roles in the preseason following injuries to surrounding players, they are on opposite sides of start/sit debates for Week 3.

The Cardinals are as explosive as it gets, and Edmonds continues to be the team’s top RB. After recording 106 yards on 16 opportunities in Week 1, Edmonds had another solid week with 75 yards on 13 opportunities against the Vikings in Week 2. He has out-touched James Conner 29 to 24 and seems to be the primary back in the passing game. While the usage around the goal line has not been flowing his way, the 61% snap share and 6.9 yards per touch are hard to overlook.

The Cardinals play the Jacksonville Jaguars in Week 3, meaning scoring opportunities should be plentiful for Edmonds. He is a lower-end RB2 that should be started in fantasy football, especially PPR formats.

It is clear the Ravens plan to use a committee approach at RB after a disastrous summer filled with injuries. But it’s clear that of those backs, Williams is the most explosive. He has posted over 90 yards in each of his games while averaging 14.9 PPR points per contest. He will have some scoring opportunities stolen by Latavius Murray and Lamar Jackson. Still, Williams remains a weekly RB2 until something drastic happens on the depth chart.

The Ravens take on the Detroit Lions in Week 3, who are abysmal against RBs. They ranked dead last in 2020 (32.47 ppg) and allowed 131 yards and 2 rushing TDs to the San Francisco 49ers in Week 1. Start Williams in Week 3 in a booming matchup.

Miami has been brutal to watch, especially their offensive line. They more closely resemble a team vying for the No. 1 pick than having playoff aspirations. And this has been reflected in Gaskin’s stats. He was solid in Week 1 with 76 total yards on 14 touches (RB21) but never had a chance in Week 2 as the Dolphins fell behind quickly. He carried the ball just 5 times for 25 yards and caught 4 of 5 targets for 21 yards on Sunday. Yet, for as bad as it has been, there are better days ahead.

For one, Gaskin is the unquestioned RB1, recording more touches (23) than both Malcolm Brown and Salvon Ahmed combined (21). In Week 3, they take on a Raiders defense that has allowed 3 RB touchdowns so far this year, including a receiving TD to Najee Harris last week. Gaskin is a start ’em in Week 3, given his projected workload. Nevertheless, he needs some signs of life around him from the offense.

No one should be surprised that he struggled last week against the Tampa Bay Buccaneers. If anything, his 7 receptions salvaged what could have been an even worse day. But it’s the matter of the usage that is concerning to me — Cordarrelle Patterson continues to be more involved in the offense. After 9 opportunities in Week 1, Patterson saw 13 on Sunday for 69 yards and 2 touchdowns. That’s not an insignificant distribution.

The Giants have been suspectable to RBs. However, you likely have better flex options than Davis, especially at WR.

I never like to make firm assumptions after only two weeks, but at this point, I have seen enough. Leonard Fournette is the RB1 for the Buccaneers, not Jones. After recording only 4 carries in Week 1, Jones laid another dud in Week 2, rushing just 6 times for 27 yards and caught 1 pass for 9 yards. Jones played on just 26 of the snaps while watching Fourtnette outpace him in snaps, routes, and carries.

Despite the chatter leading up to the season that Jones was the RB1, it’s obvious he is not. He should not see a starting fantasy roster moving forward unless something drastically changes.

Next Page: WR and TE