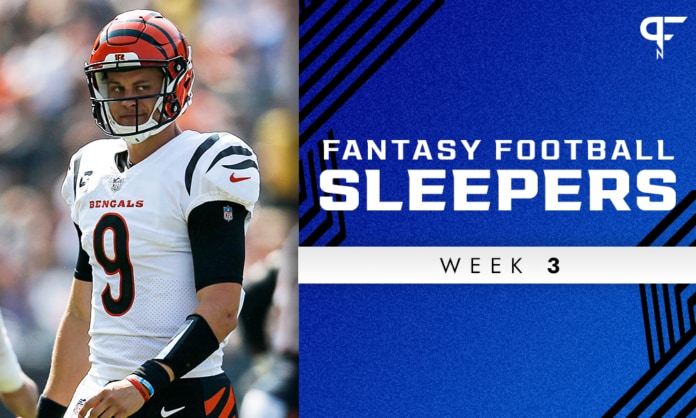 With Week 2 of the NFL season in the books, here are the Week 3 fantasy football sleepers you shouldn't overlook when setting lineups.

Although we rely on big-name players to guide our fantasy football teams to victory, knowing how to locate the sleepers in a given week could be what pushes your team over the edge. Here are some of our favorite fantasy football sleepers for Week 3.

These RBs are flying under the radar as sleepers for Week 3 in fantasy football.

Playing behind Ezekiel Elliott, Tony Pollard rushed 13 times for 109 yards and a touchdown against the Chargers. He also had 3 receptions for 31 yards. When watching the game, you could see how much more explosive Pollard is than Elliott.

Elliott’s monster contract suggests he’ll continue to be handed touches. But Pollard’s play has elevated him into high-end flex territory each week. Pollard has 4 RB1 finishes on his statistical résumé since entering the NFL in 2019. Furthermore, he’s averaged a robust 0.84 fantasy points per opportunity while playing limited snaps.

The 24-year-old is another versatile weapon for the Cowboys. Pollard and the Cowboys face the Eagles this week. You shouldn’t hesitate to insert him in lineups as an RB3 with upside.

Cordarrelle Patterson rushed 7 times for 11 yards and a touchdown against the Buccaneers. He also caught 5 of 6 targets for 58 yards and another score. Patterson has accumulated 22 opportunities (rushing attempt plus targets) through two games this season. Meanwhile, Mike Davis has accumulated 37.

Patterson also played more red-zone snaps than Davis in Week 2. It is unlikely that the Falcons would ever anoint Patterson the lead back in their committee, but the split could eventually become more balanced. Patterson’s dual-eligibility as an RB and WR on numerous fantasy football platforms makes him intriguing. He can be viewed as an RB3 or flex with upside. If the Falcons create open-field scenarios for Patterson to showcase his agility and athleticism, he’ll thrive against the Giants this week.

Ty’Son Williams rushed 13 times for 77 yards and caught 2 passes for 16 yards against the Chiefs. Baltimore’s backfield will continue to operate as a committee with Williams, Latavius Murray, and Devonta Freeman all receiving touches. But Williams — an undrafted rookie — played 49% of Baltimore’s offensive snaps in Week 2, leading the backfield.

Ravens offensive coordinator Greg Roman may continue to ride the hot hand, but Williams should still be in your starting lineups. He has a favorable matchup against the Lions in Week 3.

The NFL’s receiving talent pool is as deep as it’s ever been, and these WR sleepers could get their 2021 season off to a quick start.

Rondale Moore caught 7 of 8 targets for 114 yards and 1 score against the Vikings. A high percentage of his yardage came on his 77-yard touchdown reception. However, he also led the Cardinals in targets.

The rapport between Moore and quarterback Kyler Murray should only get stronger as the season progresses. The Cardinals have a plus matchup this week against the Jaguars. Arizona faces the Rams and 49ers in Weeks 4-5 before taking on the Browns and Texans in Weeks 6-7. The Cardinals’ fantasy playoff schedule could be a gold mine for Moore, as Arizona faces the Lions, Colts, and Cowboys in Weeks 15-17.

This week, Moore can be viewed as a WR3.

Courtland Sutton’s epic performance captivated fantasy managers on Sunday (and rightfully so), while Tim Patrick only caught 3 of 4 targets for 37 yards and a touchdown against the Jaguars. Yet, Patrick (33) and Sutton (32) ran a similar number of routes. Broncos quarterback Teddy Bridgewater and his receivers have a favorable matchup against the Jets this week. Patrick is a WR3 who has the potential to exceed expectations.

The Bears finished Sunday’s game against the Bengals with only 24 pass attempts. Mooney led all of Chicago’s receivers with 8 targets, catching 6 for 66 yards.

Quarterback Andy Dalton left the game early with a knee injury, and his status is currently unknown. Mooney is a solid WR3 with upside whether Dalton or rookie Justin Fields is under center against the Browns. Don’t be afraid to insert him in lineups.