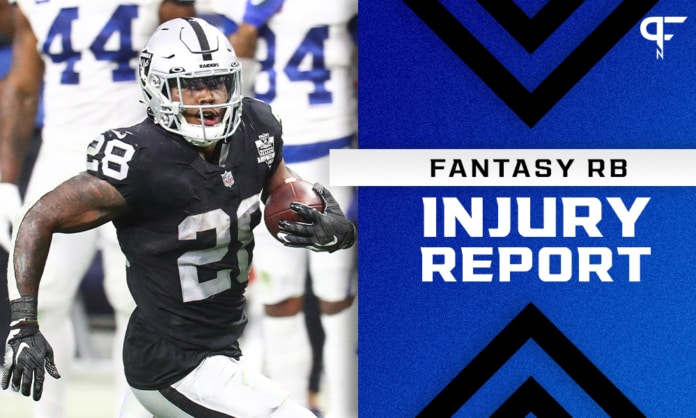 With two weeks of the NFL season behind us, let's look at the latest RB injury report update to keep in mind for fantasy football in Week 3.

Nothing can derail a potentially successful fantasy football season quicker than injuries, especially those that come to the ever so critical running back position, where finding starting-caliber talent can be challenging. As we head into Week 3, several RBs find themselves on the injury report for their respective teams. Therefore, fantasy managers need to pay close attention to any RB injury updates and reports as kickoffs draw close.

After a seemingly brutal week full of injuries, these are the running backs to watch for in Week 3 that are currently listed on the injury report.

Jon Gruden said Monday [September 20] that Josh Jacobs (toe/ankle) is day-to-day and “very questionable” to face the Dolphins in Week 3, per Adam Hill of the Las Vegas Review-Journal. Jacobs missed Week 2 due to the injuries.

If you roster Jacobs, it’s best to be at least looking for alternative options. If Jacobs plays, he is already losing touches to Kenyan Drake and could see his snap count limited as they ease him back into action.

Halfway through the fourth quarter, Dalvin Cook received a handoff and was tackled from behind. He stayed down on the field for a short time and walked off gingerly while being escorted by trainers. Head coach Mike Zimmer said it was an “ankle sprain,” but there has been no further news regarding the severity.

This one is tricky because there has been no update. However, perhaps no news is good news. If you have him in fantasy, you have to start him. An 85% Cook is better than 95% of other running backs in the NFL. With waivers set to clear, be sure you do a quick check to see if Alexander Mattison is somehow out there. He should be a priority add as he would be a higher-end RB2 if Cook were ever to miss time.

It was clear early on this season that Saquon Barkley was less than full-go. Just in his running style, he seemed hesitant at times and was also on a limited snap count. If I were coming off a torn ACL, you’d bet I would be hesitant too. And that’s me just getting up to go to the kitchen, let alone 260-pound grown men coming at me.

But we did see some instances of classic Barkey, especially on his 41-yard run in Week 2 against the Washington Football Team. He finished the game with 15 total touches and 69 yards.

It was also the second game in four days, as the Giants had a quick turnaround for Thursday Night Football. Now that the Giants and Barkley have had an extended week to rest and recover, I expect to see his workload increase in Week 3 against the Atlanta Falcons.

This week, Barkley should be started with no hesitation by fantasy managers. He could see in excess of 18 to 20 opportunities against the No. 20 ranked defense in fantasy vs. RBs (24.7 ppg).

The NFC West appears to be a hotbed of RB injuries heading into Week 3, so let’s take a look at the current situation.

According to Lindsey Thiry of ESPN, Rams head coach Sean McVay says Darrell Henderson has a rib cartilage injury that he sustained in Sunday’s game against the Indianapolis Colts. McVay added, “they have hope and optimism with him and will be checking in again Friday.”

Sony Michel would be the lead back in a difficult matchup against the Buccaneers with the Rams already down three running backs. I would caution anyone running to the waiver wire to snag Mitchel with their FAAB clenched in their hands about to risk it all on him.

While he would be the presumptive starter should Henderson miss the game, the Rams face the Tampa Bay Buccaneers in Week 3. They are 22nd vs. RBs in fantasy points allowed (25.85), but nearly 70% of that has come via the air (17.9 points). In fact, they are second-lowest in percentage on the ground, having allowed only 99 yards and 1 TD with a 3.09 ypc average through two weeks.

Michel averages only 8.7 receptions per season and has zero targets so far in 2021. This is not a matchup to target.

Rashaad Penny aggravated a calf injury against Indianapolis in Week 1 and was expected to be shut down for a few weeks to heal fully. He left Week 1 after just 7 snaps in the season opener.

Outside of Chris Carson, no other Seahawks’ RBs should be rostered in fantasy football.

What is the injury situation in San Francisco after the lost Raheem Mostert following Week 1?

So long as nothing structural was damaged, Mitchell should be on track to play in Week 3 against the Green Bay Packers, who have been susceptible against RBs, allowing 146 and 124 total yards to running backs in Weeks 1 and 2, respectively. It also helps when you are the only option — which Mitchell currently is at the moment.

Nick Wagoner of ESPN reports that Trey Sermon is in the NFL’s concussion protocol after suffering a helmet-to-helmet hit on the first carry of his career. He will be out until he passes testing.

Wagoner also reports that JaMycal Hasty suffered a high ankle sprain, which Shanahan says will keep him “out for a while.” Meanwhile, the 49ers are bringing in TJ Yeldon, Duke Johnson, and Lamar Miller for workouts due to virtually the rest of their RBs on the injury report.