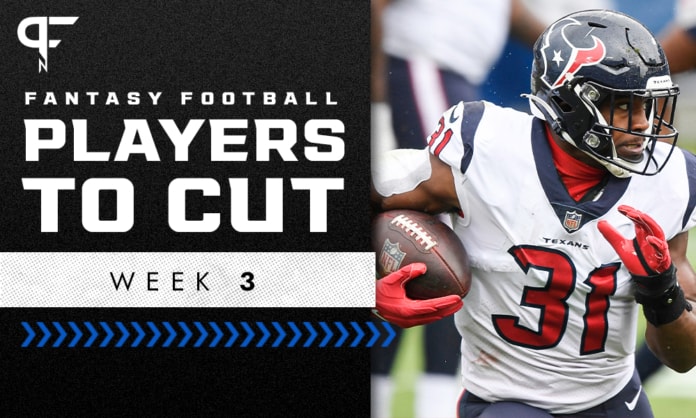 With Week 2 of the NFL in the books, here are some fantasy football players to consider cutting from your roster as we approach Week 3.

Before we dive into the recommendations, you should always have a defined reason for cutting a specific player. Remember: once you process a transaction, everyone in your fantasy league will be alerted that the player is available. If you have any hesitation, take some time to make sure it’s the right decision.

Without further ado, let’s dive in!

Currently, rookie Ty’Son Williams is the most talented running back on Baltimore’s roster. He’ll continue to see opportunities even if the Ravens maintain the hot-hand approach.

Carter totaled 59 yards on his 11 rushes and also added 2 receptions for 29 yards. He was the most impressive among New York’s running back committee and the one I’d prioritize if available in your fantasy league.

Mark Ingram is leading Houston’s backfield with 42 opportunities (rushing attempts plus targets). David Johnson, on the other hand, has only accumulated 15.

It’s going to be difficult for Johnson to be fantasy relevant with that small of a workload. Furthermore, the Texans will now be without quarterback Tyrod Taylor for the foreseeable future after he suffered a hamstring injury. With Houston starting rookie QB Davis Mills, you can move on from Johnson.

Tony Jones’ stellar training camp and preseason resulted in him taking over Latavius Murray’s backup role behind starter Alvin Kamara. However, the Saints’ offense is still a work in progress with quarterback Jameis Winston under center. This could result in Jones handling an inconsistent number of touches. He has very little standalone value right now.

The excitement regarding the reunion of Randall Cobb and Packers quarterback Aaron Rodgers is gone. The veteran receiver only has 4 targets through two games. It is going to be difficult for Cobb to be fantasy relevant with such limited volume. Hope is not a viable fantasy football strategy.

Tyrell Williams signed with the Lions this offseason to become their No. 1 receiver. However, as expected under new offensive coordinator Anthony Lynn, Detroit’s offense is operating through tight end T.J. Hockenson and the running backs.

Williams has also been dealing with a concussion and is expected back in Week 4. Unless in a deep format, Williams isn’t someone I recommend holding onto.

A.J. Green caught 3 of 6 targets for 44 yards and 1 touchdown against the Vikings last week. He took advantage of a good matchup against Bashaud Breeland. Through two games, Green has accumulated 12 targets. But considering how rookie Rondale Moore has performed, it’s unlikely this volume continues. Thus, Green is expendable in most leagues.

Veteran tight end Zach Ertz only has 4 targets through two games. He’s clearly not part of Philadelphia’s future plans. Ertz was at the center of trade rumors all offseason, but the Eagles couldn’t find any teams willing to acquire him. Now, Ertz finds himself on the reserve/COVID-19 list. It is time to move on — if you haven’t already.

Ben Roethlisberger has thrown for 483 passing yards, 2 touchdowns, and an interception through two games. Now the 39-year-old quarterback is dealing with a pectoral injury. Roethlisberger also publicly expressed his displeasure with offensive coordinator Matt Canada after last week’s loss to the Raiders. You may want to consider moving on from him depending on your league format.