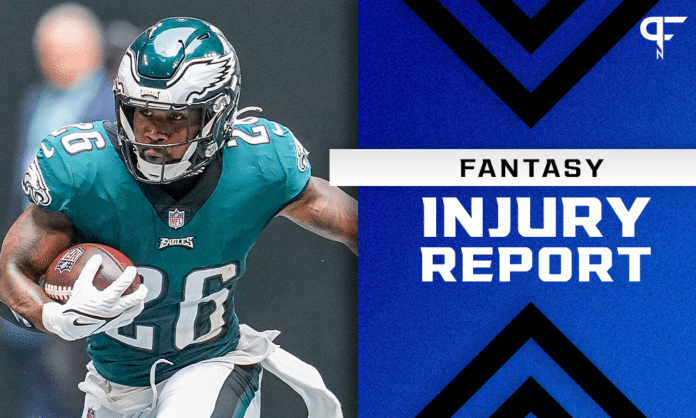 With the 2021 NFL season officially underway, here are some updated injury reports to keep in mind for your Week 2 fantasy football lineups.

The unfortunate reality of the return of the NFL is when players are allowed to go full speed — injuries are bound to happen. And Week 1 of the NFL season was no exception. Now that fantasy football managers are diving into the updates and results from the weekend, several players have found themselves on the injury report with only a few days until kickoff, leaving their status for Week 2 in the air.

According to NFL Network Insider Ian Rapoport, after undergoing a battery of tests and gathering multiple doctors’ opinions, Ryan Fitzpatrick (hip) has opted to rehab his injured hip rather than undergo surgery. Fitzpatrick has been placed on IR and expects to miss around 6-8 weeks as he attempts to play again in 2021. Taylor Heinicke took over at QB for Fitzpatrick in Week 1 and will remain the team’s starting QB moving forward.

Rapoport reports that the Raiders expect Marcus Mariota to miss multiple weeks after he aggravated an existing quadriceps injury on a 31-yard rush on Monday [September 13].

Let’s see how the injury bug is affecting RB committees in Week 2.

On Monday, David Lombardi of The Athletic reported that Raheem Mostert would be out roughly eight weeks with a chipped cartilage issue in his knee. Well, that would have been the plan, but things change quickly in the NFL.

Mostert announced on his social media account that he would undergo season-ending knee surgery after consulting with multiple doctors. Elijah Mitchell is the likely RB1 for the 49ers but has competition from fellow rookie Trey Sermon, along with an extensive list of other RBs on the depth chart.

Rashaad Penny left the game against the Colts with a left calf injury and did not return. According to Seahawks reporter John Boyle, head coach Pete Carroll said Penny’s calf tightened up on him. They kept him out as a precaution. Per Rapoport, the Seahawks will shut Penny down for a few weeks to allow the injury to heal fully.

Despite playing in Week 1 and having a stellar performance, Swift missed portions of practice on Thursday [September 16] with a groin injury. Swift also missed most of training camp with a groin injury. This led to head coach Dan Campbell at one point questioning his level of conditioning. Nevertheless, Swift ended the game with 104 total yards and a TD on 19 touches.

Much like his counterpart, Jamaal Williams was also limited in practice Thursday but with a chest injury. He finished with a team-high 54 rushing yards on 9 carries and 110 yards of total offense in Week 1. Williams has arguably the soundbite of the week as he prepares for a revenge game against the Green Bay Packers.

According to Vincent Bonsignore of the Review-Journal, Josh Jacobs (toe/ankle) was not at practice on Thursday. He was a DNP on Wednesday as well, following the team’s Monday night game. Jacobs went into Week 1 questionable with an illness. Yet, he recorded 40 total yards and 2 touchdowns on 11 touches against the Baltimore Ravens.

After limited participation on Wednesday, Miles Sanders (ankle) was a full participant on Thursday, according to the team’s official practice report. Sanders had a solid performance in Week 1 with 15 carries for 74 yards and 4 receptions on 5 targets for 39 yards.

According to NFL Network’s Tom Pelissero, X-rays on Jeudy’s ankle were negative, believing he suffered a high ankle sprain. Mike Klis of 9News confirmed these reports and stated the Broncos believe Jeudy will be sidelined 4-6 weeks with that high ankle sprain. The team also placed Jeudy on the IR.

Expect Courtland Sutton to be thrust back into the spotlight (ACL tear in 2020) and increased reps for KJ Hamler, Tim Patrick, and Noah Fant.

Despite his progress, head coach Kevin Stefanski elected not to play Odell Beckham Jr. on Sunday against the Kansas City Chiefs. That trend will carry over into Week 2 as Beckham (ACL) has been ruled out, according to Nate Ulrich of the Akron Beacon Journal.

Ulrich also reported that Anthony Schwartz was a limited participant for the second day in a row on Thursday. Schwartz had a significant role in Week 1, tying for the team-high in targets (5) with 3 receptions and 69 yards. He also led the Browns in air yards in Week 1 with 122. Landry was the next closest WR with 119. Schwartz is projected to see volume once again with Beckham out a second week.

Jonas Shaffer of The Baltimore Sun reports that Marquise Brown missed practice for the second-straight day on Thursday. Brown had a productive first game of the 2021 season, catching all 6 of his targets for 69 yards and a touchdown.

Per Lions’ writer Tim Twentyman, Tyrell Williams remains in the concussion protocol. As reported by HC Dan Campbell, his availability for Monday’s game vs. the Packers is up in the air.

According to Marcel Louis-Jacques of ESPN, Preston Williams was a full participant in practice on Thursday. Williams didn’t play Week 1 against the Patriots due to a lingering foot injury from his stint on IR in 2020. He has had both of his NFL seasons cut short after eight games due to season-ending injuries.

After missing Week 1, the Jets have activated Jamison Crowder from the reserve/COVID-19 list. Still, he logged a limited practice on Thursday with a groin injury, according to Ralph Vacchiano of SportsNet New York.

Rich Cimini of ESPN reports Keelan Cole was a limited participant Thursday due to a knee injury. Cole suffered a knee injury in the lead up to Week 1 and missed the season opener.

According to Eric Branch of the San Francisco Chronicle, Brandon Aiyuk was not listed on the teams’ injury report Thursday. Aiyuk has been the hot topic all week after recording zero targets on 26 snaps in Week 1. It seems to be a combination of health, high expectations from head coach Kyle Shanahan, and solid play being rewarded from other WRs on the depth chart.

Per Joe Buscaglia of The Athletic, Emmanuel Sanders (foot/rest day) said he’ll be “good to go” and expects to be back at practice on Friday.

According to Mike Reiss of ESPN, Jonnu Smith (hip) was added to the Patriots’ injury report on Thursday as a limited participant. Smith looks to be a critical weapon of the Patriots’ passing game, lining up all over the formation in Week 1 while recording 5 receptions and 42 yards (5 targets).

Jimmy Graham was given a veteran’s rest day and did not participate in practice on Thursday, per Mike Petraglia of Field Level Media.

According to the team’s Thursday practice report, Ertz (hamstring/rest) was a limited participant.

Eric Ebron (hamstring) didn’t practice Thursday, Dale Lolley of DK Pittsburgh Sports reports. Ebron was added to the injury report on Thursday, putting his Week 2 status in question. Rookie Pat Freiermuth would be in line for the TE1 role vs. the Raiders.

According to Kayla Anderson of WKRN News 2, Anthony Firkser (knee) was a limited participant in Thursday’s practice.