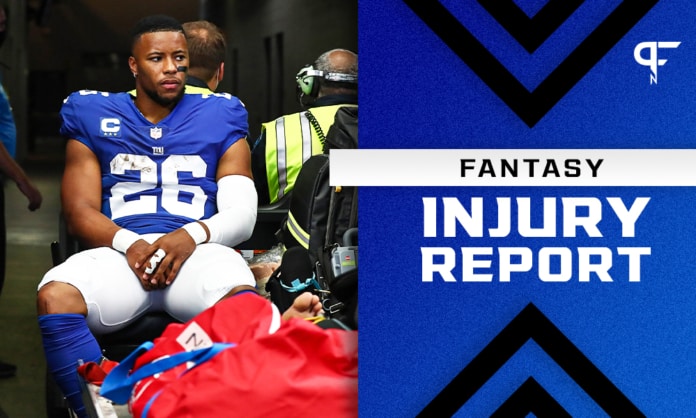 With the 2021 NFL season reaching full gear, here are some updated injury reports to keep in mind for your Week 6 fantasy football lineups.

The unfortunate reality of the return of the NFL is that when players are allowed to go full speed, injuries are bound to happen. Week 5 of the NFL season was no exception. Now that fantasy football managers are updating their lineups for the coming week, several players have found themselves on the injury report, leaving their status for Week 6 in the air.

Late in the second quarter, Jones rolled out as he attempted to run for a score and took a helmet-to-helmet hit, leaving him unable to walk on his own. Medical personnel assisted him off the field and carted him into the locker room with apparent concussion-like symptoms. He was ruled out for the remainder of the game and was replaced by Mike Glennon.

Burrow was taken to a local hospital with a throat contusion following the Bengals’ 25-22 overtime loss to the Packers, per a team spokesperson. The second-year quarterback played the entire game, which made this injury news a bit of a surprise. Burrow completed 26-of-38 passes for 281 yards, 2 touchdowns, and 2 interceptions against Green Bay.

While attempting to make a downfield reception, Hill took a helmet-to-helmet hit as a defenseless receiver. He was carted off the field and ruled out for the remainder of the game with a concussion. Hill will enter the NFL’s concussion protocol, but given that the Saints have a bye in Week 6, he will have an extra week to recover.

How is the injury bug affecting RB committees heading into Week 6?

In the first quarter, Barkley stepped on a defender’s foot and severely rolled his ankle. He was on the sidelines on the bench with his shoe off, and his ankle had ballooned from the swelling. Barkley was carted off the field to the locker room and subsequently ruled out for the remainder of the game. He will be highly doubtful for Week 6.

Harris left Sunday’s game against the Texans in the middle of the fourth quarter and did not return. Earlier in the contest, he’d gone to the locker room in the second half due to a chest injury. At the time he left the game, Harris had 14 carries for 58 yards and a touchdown but also had a costly fumble at the goal line.

In the second quarter, Smith-Schuster suffered a right shoulder injury while carrying the ball. He was in obvious pain as the medical staff performed tests on the sidelines and was quickly ruled out for the remainder of the game.

According to the FOX broadcast, Golladay was ruled out for the remainder of the Giants’ game with a knee injury. The injury occurred at some point in the second quarter. At the time of his injury, Golladay had 0 receptions on 3 targets. New York was already without Darius Slayton and Sterling Shepard due to injury, and also lost Golladay, Barkley, and Jones in Week 5.

Harris sustained a hamstring injury and was ruled out for the rest of the game. He had 1 reception on his lone target for a 72-yard touchdown.

Sometime in the second quarter, Samuel re-aggravated his groin injury and was ruled out for the remainder of the game. After signing a three-year deal in the offseason, Samuel has just 4 receptions on 5 targets for 19 yards. Since late spring, this injury has bothered Samuel, and there is no telling when he might be back.

Cephus suffered a shoulder injury against the Vikings and did not return. At his postgame press conference, head coach Dan Campbell suggested Cephus could be out an extended period of time.

“Yeah, it looks like it’s in the shoulder, front area,” Campbell said. “Could be his clavicle, could be his shoulder — but it doesn’t look good.”

Which tight end injuries should we be mindful of when setting our fantasy lineups?

Williams was carted off the field Sunday after taking a hit to the lower leg against the San Francisco 49ers and was quickly ruled out. Based on the way his leg bent, Williams is believed to have suffered a serious injury. He had been on pace for a career-best season, with 193 yards and a touchdown on 16 catches through four-plus games.