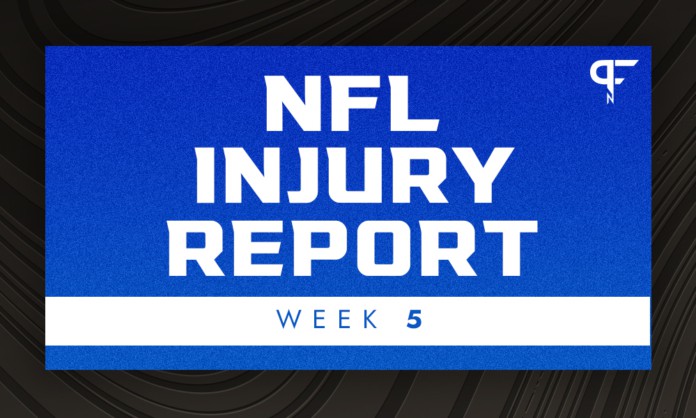 With Week 5 upon us, it's time to dig into some updated injury reports to keep in mind while setting your fantasy football lineups today.

The unfortunate reality of the return of the NFL is that when players are allowed to go full speed, injuries are bound to happen. Week 4 of the NFL season was no exception. As fantasy football managers set their lineups with hours to kickoff, several players find themselves on the injury report, leaving their status for Week 5 in the air.

Here is where we currently stand in terms of the fantasy football QB options dealing with injuries.

Update: Teddy Bridgewater is active for the Broncos Week 5 game.

According to Nick Wagoner of ESPN, the 49ers ruled Garoppolo (calf) out for Sunday’s game against the Cardinals. As a result, rookie QB Trey Lance will make his first career start in Week 5 and should be viewed as a high-end QB2 with top-10 upside.

How is the injury bug affecting RB committees heading into Week 5?

Per Darren Urban of the Cardinals’ official site, Edmonds (shoulder) practiced in a limited fashion Friday. Additionally, Arizona listed him as questionable for Sunday’s game against the 49ers. This designation is not a surprise as head coach Kliff Kingsbury declared Edmonds would be a game-time decision. With kickoff at 4:25 PM ET, fantasy managers are in a problematic spot unless we get news earlier in the day. Should he miss, James Conner would be a solid RB2 option.

Update: Christian McCaffrey is inactive for the Panthers Week 5 game.

Carolina listed McCaffrey (hamstring) as doubtful for Sunday’s game against the Eagles, according to David Newton of ESPN. The Panthers do not expect McCaffrey to play as they want to exercise caution with their best player. Thus, Chuba Hubbard gets another start in rotation with Royce Freeman and Rodney Smith.

ESPN’s Dan Graziano reported that Montgomery has a knee sprain and is expected to be out four to five weeks. The Bears subsequently placed Montgomery on the IR.

Update: Joe Mixon is active for the Bengals Week 5 game.

According to NFL Network Insider Tom Pelissero, Mixon (ankle) went through a workout Saturday morning and is trending towards playing Sunday against the Packers in some capacity. However, the latter part of that is the critical point to note. Although Mixon is active, the likelihood of him receiving his normal workload does not seem high, increasing the risk of starting him in fantasy.

Adam Caplan of SiriusXM NFL Radio reports that Elliott (knee) is considered questionable for Sunday’s game against the Giants. Nevertheless, he is expected to play after he closed out the week with back-to-back limited practices.

Update: Melvin Gordon is active for the Broncos Week 5 game.

George Stoia III of The Denver Gazette reports that Broncos head coach Vic Fangio is confident Gordon (lower leg) will play Sunday against the Steelers after recording limited practices on Thursday and Friday.

Update: D’Andre Swift is active for the Lions Week 5 game.

Per Tim Twentyman of the Lions’ official site, the Lions expect Swift (groin) to play in Week 5 and have listed him as questionable. Swift has been listed as questionable on the injury report with a groin injury all season, so this seems to be par for the course.

Update: Jamaal Williams is active for the Lions Week 5 game.

Williams (hip) is listed as questionable for Sunday’s game against Minnesota as well, per Twentyman. He was able to practice this week but in a limited fashion, however.

After returning to practice Friday, Barber (toe) is listed as questionable for Sunday’s game against the Bears. Ian Rapoport of NFL Network reports Barber was dealing with a mild case of turf toe that could sideline him for a few weeks, but his return to practice may suggest otherwise.

Update: Dalvin Cook is inactive for the Vikings Week 5 game.

Chris Tomasson of the St. Paul Pioneer Press reports that Cook did “some work” at Friday’s practice, following DNPs on Wednesday and Thursday. He is listed as questionable for Week 5. Odds are Cook will split reps with Alexander Mattison as he did last week playing on 51% of the offensive snaps.

Sam Fortier of The Washington Post reports Gibson revealed Friday that he’s been playing through a stress fracture in his shin after initially being diagnosed with a bruised shin in Week 4. Gibson stated it doesn’t hurt badly, but needless to say, this is extremely concerning. Gibson is questionable but is expected to play Sunday against the Saints in Week 5.

Both Ridley (personal reasons) and Gage (ankle) did not make the trip to London and are out for Week 5 against the New York Jets.

Jamison Hensley of ESPN reports Bateman (groin) may make his NFL debut on Monday against the Colts. Bateman has been on the IR and was designated to return, which started a 21-day window to activate him to the 53-man roster.

Update: Courtland Sutton is active for the Broncos Week 5 game.

Sutton suffered a sprained ankle during Friday’s practice [October 8] that Mike Klis of 9News Denver describes as “not serious in nature.” Nevertheless, Schefter reports Sutton will be a game-time decision.

Update 10/10/2021: DeVante Parker has officially been ruled out for their game against the Buccaneers.

Parker (shoulder/hamstring) is listed as questionable for Sunday’s game against the Buccaneers, Hal Habib of The Palm Beach Post reports. Parker was a limited participant in practice from Wednesday through Friday, first due to a shoulder injury before a sore hamstring popped up later in the week.

Jordan Raanan of ESPN reports both Slayton and Shepard have been ruled out with hamstring injuries.

Washington (groin) has been ruled out for Sunday’s game against the Broncos.

Tennessee ruled Jones (hamstring) out of Week 5 against the Jacksonville Jaguars. However, the return of A.J. Brown does help to offset the absence of Jones for a second straight week.

John Keim of ESPN reports Samuel (groin) is listed as questionable for Sunday’s game against New Orleans. Additionally, head coach Ron Rivera said Friday that the wideout is trending in the right direction. It appears Samuel suffered a re-aggravation after returning from the IR due to the same groin injury that cost him the majority of the offseason and the team’s first three games.

Which tight end injuries should we be mindful of when setting our fantasy lineups?

On Wednesday [October 6], Washington placed Thomas on IR due to a hamstring injury. He’s ineligible for the next three games, with Week 8 at Denver being his earliest possible date for a return.

Update: T.J. Hockenson is active for the Lions Week 5 game.

Hockenson (knee) is listed as questionable for Sunday’s game at Minnesota, according to the team’s final injury report. He is believed to have picked up the injury last week but appears in no danger of missing Week 5.

The 49ers officially placed Kittle (calf) on IR. As a result, he will miss the team’s next three games. However, due to San Francisco’s upcoming schedule, Kittle will miss at least four weeks due to their bye week falling during this timeframe. Under the NFL’s bylaws, it is three games, not three weeks, a player must miss after being placed on the short-term IR. Kittle will be eligible to return in Week 9 against Arizona at the earliest.