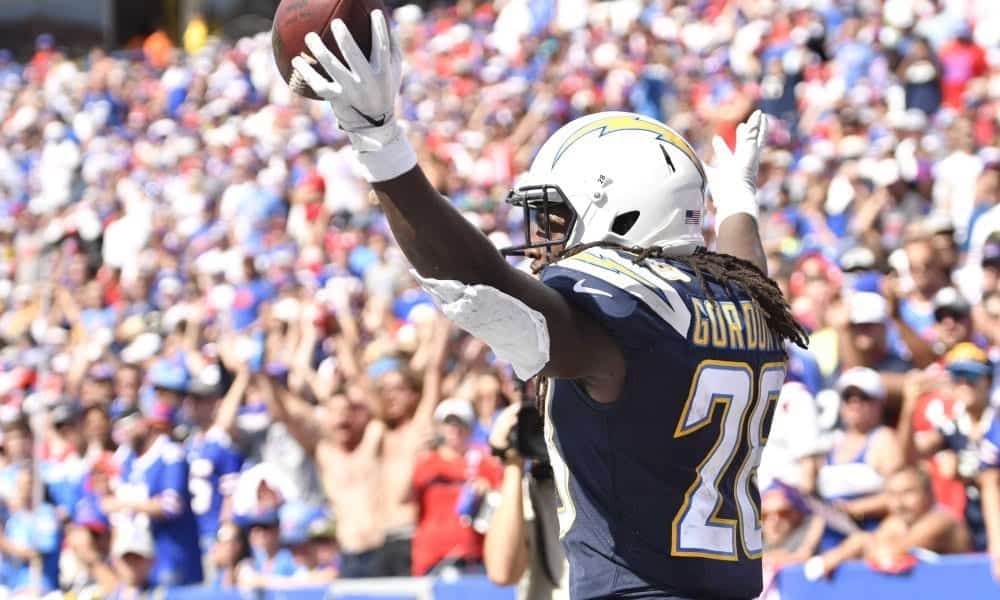 On July 11th, it was reported that Melvin Gordon was prepared to hold out of training camp and demand a trade if a new deal couldn’t be reached between him and the Los Angeles Chargers. Now, on July 26, Adam Schefter is reporting that it is expected that the holdout will be prolonged and could linger for some time. Per Schefter, the two sides are far apart on money and that gap doesn’t look to be closing anytime soon.

Gordon is entering the fifth-year option of his rookie contract and is due to make $5.6 million this season. Hold outs and suspensions are always a tricky deal in fantasy football. And with someone like Gordon, it becomes even more complicated.

But, we’re here to sort through the mess and offer a plan on how to handle the situation. We’ve opened this article for everyone, even if you don’t have the PFN All-Access Pass. Soon, we will only limit these types of articles to those who hold the Pass. For just $30/year, you’ll receive expert advice like this where we tell you exactly what you need to do so you can spend less time worrying and more time winning.

Gordon stands to lose a lot of money if he were to sit out for the entire year. Missing training camp alone would cost him $1.325 million. The bigger issue for Gordon is the possibility of triggering a “tolling” clause in the contract. I won’t lie, I’m no expert on the financial aspects of this situation. From what I’ve read, if he were to hold out of enough games to trigger tolling, he would essentially be in the same situation next year. It would be as if this year never existed, and thus he would still be under his fifth-year option.

Joey Galloway missed the first nine games of the 1999 season amidst a contract dispute. However, an arbitrator did not deem enough games were missed to trigger tolling. If we go by Galloway’s timeline, Gordon can miss up to nine games before his season is in jeopardy of being void. Joel Corry wrote a piece on Gordon’s and Ezekiel Elliott‘s holdout situations, which explains each much better than I can.

Basically, if Gordon holds out long enough, he risks being in the same situation next year due to tolling.

As I said above, holdouts and suspensions are always a tricky situation to handle. We aren’t here to debate whether he is actually worth the money or not, just what to do from a fantasy perspective. Below is what Pro Football Network fantasy football writer Andrew Hall has to say about the Melvin Gordon situation.

Even with the news from Adam Schefter, do I think Melvin Gordon holds out like Le’Veon Bell? No. Is there a chance? Of course, but that chance is about 20-30% in my mind. That means Gordon is no longer worth a first-round pick, and potentially not worth a second-round pick, depending on how risk-averse you are as a fantasy player. This uncertainty definitely adds to his risk profile, but you can still get value out of him in the right situations.

It all comes down to how your specific league thinks of him. If you play with a lot of people that fight over suspended players and are constantly churning rosters then go get Gordon. Get him now. He’ll pay off to someone at the right time. On the other hand, if your league is one of those that barely talks or has months where a player sits on waivers before someone takes a chance, then hold off. Let the situation work itself out more before making a move.

Either way, Gordon is not a true avoid for me, at least not yet. He’s under contract this year. Bell, on the other hand, was avoiding a franchise tag. If Gordon sits out, the Chargers could apply the franchise tag to him next year, meaning he’d lose two seasons at a very high cost since he won’t be getting paid either. If you have Gordon, hold on tight, but if you’re drafting, go for players with more certainty with your first pick.

My take on Melvin Gordon

Initially, I thought there was no way you could draft Gordon in light of him holding out until a new deal was reached. He had sympathized with Le’Veon Bell during his holdout, saying he would do the same thing if he were in Bell’s situation.

But, the Chargers have already offered him a deal, so they have expressed interest in paying him. That said, Gordon claimed he felt disrespected by the offer. It isn’t pretty, but I just can’t see how he misses the entire year given he’d probably be in the same situation next offseason.

I mostly agree with Andrew’s stance on the situation in that it’s mostly league dependent. For example, he has recently dropped to the middle of the second round in Play Draft’s Best Ball leagues. If you’re entering the $25 championship, I would feel comfortable snagging him there because you’ll have a different roster than the other Melvin Gordon teams that took him around 1.06.

I would also feel comfortable taking him in softer home leagues. If you feel you are better than the rest of the league and can manage to lose a bench spot while Gordon misses significant time, then go ahead and snag him at a discount.

However, I am also on board with just ignoring him entirely. Spending a late first/early second-round pick on a player who could miss a quarter of the season is how you lose fantasy football leagues. Let’s say you take him in the middle of the second and he ends up missing eight games. It’s entirely plausible two of your other first four-round picks either get hurt or under-perform. In this scenario, you missed three of your first four picks. You’re most likely done if that’s the case. It’s extremely difficult to come back from that type of hole.

If he misses eight games, that’s two-thirds of the fantasy football season you wouldn’t have your early second-round pick. Considering there are players available in the top 24 who we know will be available, there’s no reason to take that risk. Let someone else deal with the headache.

To sum it up, I would take him in the $25 Best Ball championship on Play Draft, and in leagues where you feel you have a clear advantage over the majority of other owners. In your standard ten and twelve team fantasy football leagues where you assume everyone is of equal skill, I wouldn’t touch him. The risk doesn’t outweigh the reward in my opinion, especially when I feel the first two rounds are pretty deep. Taking a risk on a Melvin Gordon type of situation is how you lose fantasy football leagues. If all things are equal, it isn’t worth it.

If you decided not to draft Gordon, if you do go ahead and take the risk, you’ll need to make sure you’re covered if you want a share of the Chargers backfield. Here’s a rundown of what you can expect.

Ekeler had value before the Gordon news but obviously has somewhat more if he holds out. I wouldn’t be shocked if he goes up a round or two as we get closer to the start of the season. Since he’s specifically the 3rd down back and closer to Tarik Cohen than Melvin Gordon, don’t expect him to get the bulk of the carries with Gordon out. That said, he’s still a worth flex player in most formats.

Justin Jackson is the easiest replacement option for the Los Angeles Chargers if Gordon misses extended time. Last seasonm he did well taking up the mantle and should see a major increase in volume if given the chance. His ADP says he’s going in the 18th/19th round but I wouldn’t be shocked to see him as high as Ekeler if the holdout talk continues.

Obviously this guy is a long shot but he’s technically the next up on the depth chart for touches behind Jackson and Ekeler. Oddly enoughm he’s older than both of them but I wouldn’t call him any more experienced. Newsome might be worth a pickup in dynasty leagues with deeper benches, but don’t draft him unless you feel like taking a flyer on someone late.

Cox is the true definition of a dark horse. At 236 lbs, he’s built more like a fullback than a true running back, and the depth chart at OurLads puts him there as well. But don’t let that fool you, he’s got some moves. This 22-year old rookie could be a true three-down back if given the chance. But, don’t grab him unless the other three are already taken and you have a roster spot to burn.

James Aguirre and Andrew Hall are writers for PFN covering Fantasy Football. You can follow them on Twitter @PFN_James and @AndrewHallFF.

Like what you’ve read? Will this advice help you this coming season? With the PFN All-Access Pass for just $30/year, you’ll receive articles such as this on a daily basis. While this article is open to everyone, other content we have coming out each day is restricted..and the closer we get to the season, the less content we will open up to the public.

While others are reading the same free content elsewhere, you can be getting expert advice on what you need to do so you can spend less time researching and more time putting money into your bank account.

In this article:Featured, featured, Melvin Gordon