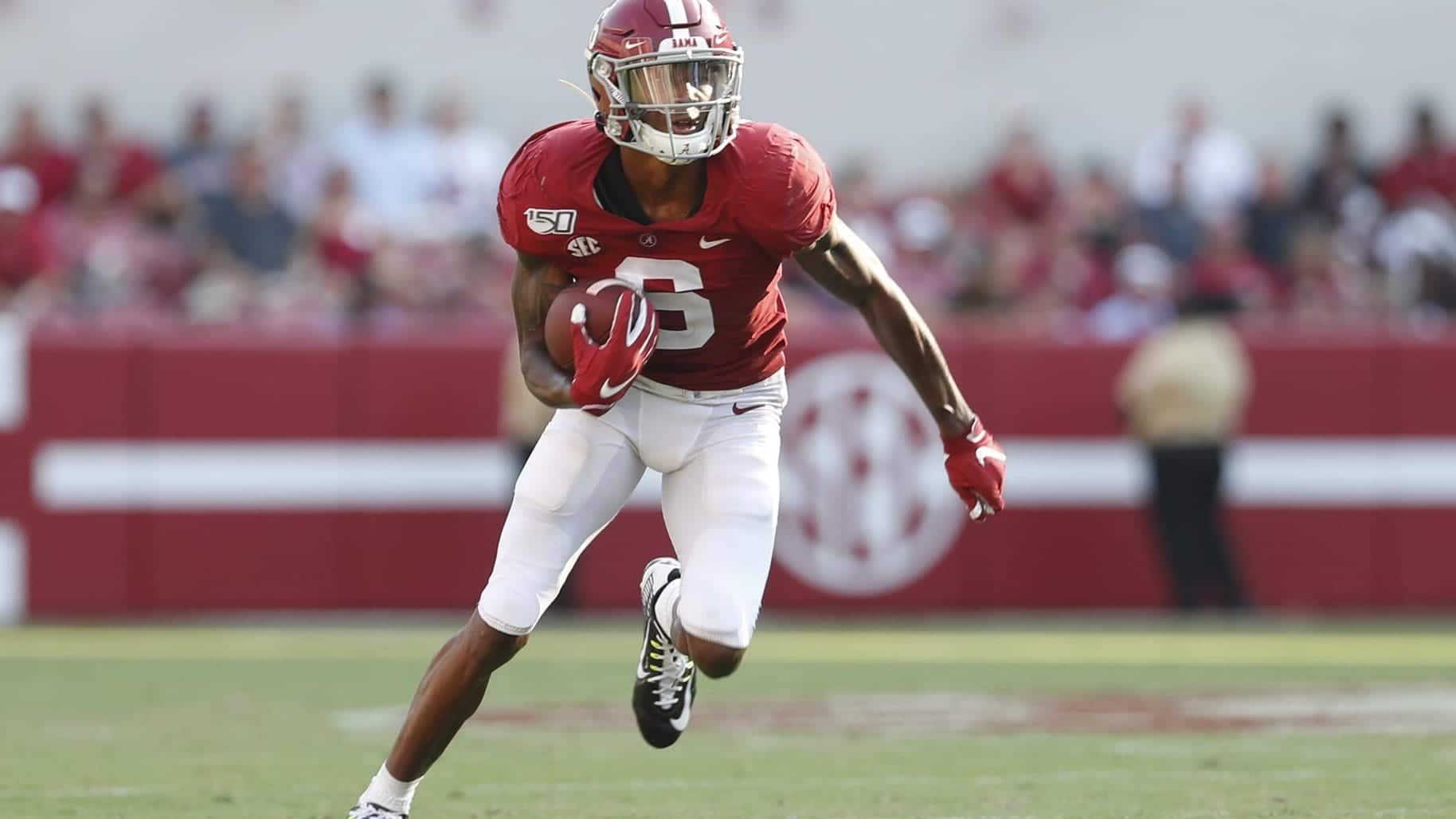 Photo Credit: Alabama Athletics
What's in this article? Click to show
Stock Up
Stock Down
Devy Matchups to watch in Week Six

With five weeks of college football action in the books, the time for devy fantasy football hot takes is now.

No, Trevor Lawrence isn’t overrated or a bust. Even if he’s having a subpar sophomore season, the quarterback phenom is still an elite prospect that’s the sure-fire number one pick in the 2021 NFL Draft.

The same goes for TCU wide receiver Jalen Reagor. While his stats have been extremely disappointing this season, it’s not exactly Reagor’s fault that his quarterback is incapable of making downfield throws. Reagor showed his electric playmaking ability with his 73-yard punt return against the Kansas Jayhawks.

Remain calm, take deep breaths, and try not to overreact to box scores. Try to see the big picture and what these prospects could be in a couple of years. With Week 5 of the college football season in the books, it’s time for our weekly stock report and a preview of the best devy fantasy football matchups in Week 6.

Standout players that saw their devy stock increase from the previous week include:

Devonta Smith – On Saturday, we saw one of the greatest wide receiver performances in Alabama football history. The often-overlooked Smith had 8 catches for 221 yards and a school-record 4 touchdown receptions at halftime of Saturday’s SEC contest against the Ole Miss Rebels.

Smith added 3 additional catches in the second half to finish with 11 receptions for a school-record 274 receiving yards and 5 touchdown receptions. After Saturday’s breakout performance, Smith now has more touchdowns than last season while being less than 200 yards away from his yardage output from a season ago.

Even with the crowded depth chart in Tuscaloosa, Smith has jumped ahead of 2021 prospect Jaylen Waddle in the Alabama pecking order this season. While Smith was regarded below his Alabama teammates coming into the season, he has immensely improved his fantasy football stock moving forward.

While Riley’s scheme and coaching ability play a significant role in Hurts’ passing success, it also can’t hurt to have a couple of bonafide stars to throw to. Wide receivers CeeDee Lamb and Charleston Rambo reminded viewers in Week 5 why they’re one of the best duos in college football.

Lamb, ranked eighth in my initial 2020 dynasty rookie rankings, might be the only wide receiver talented enough to challenge Alabama’s Jerry Jeudy for WR1 status. The explosive Lamb showed that talent in Week 5 with 185 yards and three touchdown receptions.

The speedy Rambo only caught two passes in Saturday’s 55-16 victory over Texas Tech, but he turned those two receptions into 122 yards. While Lamb is currently ahead of 2021 prospect Rambo in fantasy football circles, both players should have a future on the next level.

Disappointing players that saw their devy stock decrease in the previous week:

Bryce Perkins – Normally, a player with over 300 passing yards and 2 touchdown passes would never end up on this list. Saturday was far from a normal day for Virginia quarterback Bryce Perkins though.

With concerns about Perkins’ ability to throw at the next level, Saturday’s meltdown in the second half didn’t exactly help the dual threat’s fantasy football stock moving forward.

Adrian Martinez – Talk about an all-time letdown. With College Gameday in town and all eyes on Nebraska’s primetime matchup with #5 Ohio State, Week 5 was the perfect time for the quarterback to showcase his skills for the world to see.

Martinez probably wishes he could erase the game from the history books altogether. The sophomore quarterback finished the highly-anticipated contest with less than 50 passing yards and three interceptions in one of the worst quarterback displays you’ll ever see. Martinez did add 81 yards on the ground, but the majority of that was on a 56-yard scamper in garbage time.

Luckily for Martinez, the 2021 or 2022 prospect has plenty of time to enhance his fantasy football stock moving forward. While Trevor Lawrence and Justin Fields stand above the other potential 2021 quarterbacks, Martinez is undoubtedly talented enough to land in that next tier of passers. Saturday’s contest was an early indication that he might need more time to develop for the next level.

Jordan Woodson is a writer for the Pro Football Network covering Fantasy Football. You can follow him on Twitter @Jordan_Woodson.