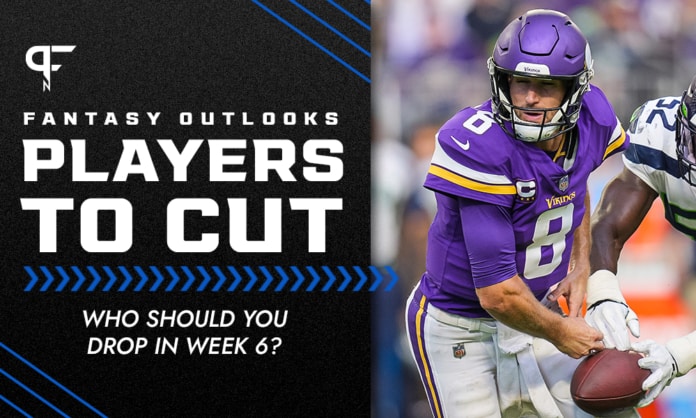 Following an exciting Week 5, who are the players on the Week 6 cut list that fantasy managers should be removing from their rosters?

Let’s go position by position and pinpoint players that no longer need to be on your fantasy roster. What fantasy quarterbacks are on the Week 6 cut list?

After a scorching start to the 2021 season, Kirk Cousins has cooled off considerably. The Captain averaged 24 points per game over the first three weeks of the season but has scored just 11 and 14 fantasy points, respectively, in the last two weeks.

Four of Cousins’ next five weeks pose unfavorable matchups, and the other week is a bye. The next game you’d feel comfortable starting Cousins is Week 11. He’s not worth holding until then.

The following fantasy running backs are on the Week 6 cut list.

It is astounding that this man remains rostered in 47% of Yahoo leagues. Last week, 17 runnings backs scored at least 18.3 PPR fantasy points. Ronald Jones has scored 18.2 all season. The best thing Jones can do for your fantasy roster is to not be on it.

It is surprising that Mark Ingram’s name even needs to be here. He was so cooked in 2020 that John Harbaugh benched him over the second half of the season. For some reason, the Texans still think he can play football in the NFL. He can’t. That’s why he’s scored 14.5 fantasy points over the past four weeks. He’s still 31% rostered in Yahoo leagues. That number should be 0%.

I’ll admit it. I was on the Kenyan Drake bandwagon entering this season. It had nothing to do with Drake and everything to do with Josh Jacobs being a replacement-level talent. After five weeks, we’ve now learned that the answer to “Jacobs or Drake” was “no.”

Drake’s touched the ball precisely three times over the past two weeks. Even if Jacobs were to get hurt again, Drake would have no value. He is 65% rostered in Yahoo leagues. Let’s lower that number considerably.

Which fantasy wide receivers are on the Week 6 cut list?

There aren’t many wide receivers that absolutely need to be cut. This season, Jalen Reagor has three games with 5.4 fantasy points or fewer, and he’s received just 6 targets the past two weeks. Jalen Hurts spreads it around way too much beyond DeVonta Smith. Reagor is 17% rostered in Yahoo leagues, but he can go.

By no means should you absolutely cut Robby Anderson for no one. However, Anderson, a player once considered to be a must-roster, no longer is. If not for his 57-yard touchdown in Week 1, Anderson would have gone five weeks to start the season without reaching double-digit fantasy points.

Anderson’s target share increased over the past two weeks with Christian McCaffrey out, but he’s been unable to capitalize on it. McCaffrey is due back this week, so now Anderson doesn’t even have that to fall back on. He is 72% rostered in Yahoo leagues, but that rate is based on name-value alone — Anderson can be cut.

I’m putting Brandon Aiyuk here with a caveat. Aiyuk is a second-year player that has talent. There is still a genuine chance he turns it around. Yet, Aiyuk has scored more than 5.2 fantasy points just once in five weeks and has averaged a mere 3 targets per game. With the 49ers on a bye this week, if you need to drop someone, don’t be afraid to make it Aiyuk.

I’ve been a huge fan of Curtis Samuel since he came into the NFL. I was very bullish on what he could do in Washington’s offense. Unfortunately, Samuel has been dealing with a groin injury since early in the summer and just hasn’t been able to get right. He keeps trying to rehab and play through it, but it’s not working. It’s very clear that it’s just not going to happen for Samuel in 2021.

He’s only 31% rostered in Yahoo leagues, which means many fantasy managers already figured this out. For those of you holding out, feel free to let go.

JuJu Smith-Schuster suffered a season-ending shoulder dislocation in Week 5. Therefore, you can safely cut him.

The tight end position is so weak that any tight end capable of seeing a few targets and possibly score a touchdown is worth rostering. At the same time, any tight end outside the top 12-ish is a glorified streamer. Unless a name you wouldn’t expect to see here emerges, this will likely be the extent of the tight end cut list.

Jason Katz is a Fantasy Analyst at Pro Football Network. You can follow him on Twitter: @jasonkatz13 and find more of his work here. Don’t forget to listen to the PFN Fantasy Football podcast and check out our free fantasy newsletter.